Star Wars: The Rise of Skywalker Closes Out The Saga On An Underwhelming Note 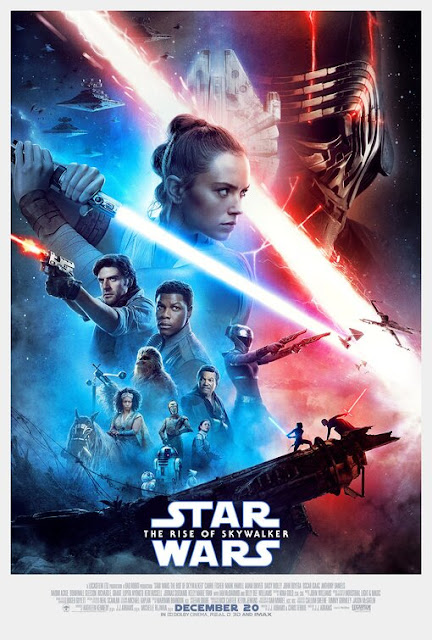 For the final entry in the nine-film Skywalker Saga, we reunite with the heroes of the most recent entries in the story, scavenger turned Jedi Rey (Daisy Ridley), stormtrooper turned Resistance hero Finn (John Boyega) and folk singer turned pilot Poe Dameron (Oscar Isaac). Ultimate baddie Palpatine (Ian McDiarmid) has returned from the dead and is now working with Kylo Ren (Adam Driver) on a whole new evil plot. In order to save the galaxy and win the war against these dastardly foes, Rey must muster up all her courage and confront both old & new evil forces as well as her struggle to define who she is.

Star Wars: The Rise of Skywalker begins with a bang and rarely pauses for a breath afterwards. At first, the proceedings reminded me of a classic pirate adventure tale, particularly in what artifact serves as a MacGuffin for the first-third of the tale. After a whole, though, I began to get Pirates of the Caribbean: At World's End vibes instead as people kept running from one forgettable location to the next and barrages of convoluted expository dialogue filled up the screen. Where's any elegant simplicity? J.J. Abrams and Chris Terrio's screenplay is all about tossing a bunch of darts at the board and hoping something hits a bullseye.

Occasionally, they do manage to knock out a fun crowdpleaser moment, but as The Rise of Skywalker goes on, it becomes apparent that this messy script has an issue with relying too heavily on the bad kind of big "twists". Too often, major events arrive and mostly have an impact on a shock value level since they either don't leave a lasting ripple effect on the story or get resolved in a lightning-fast fashioned. There's only so many times you can play the same card trick on somebody before they get annoyed. The same is true of how The Rise of Skywalker keeps dangling big hollow "revelations" in front of the audience in hopes of it serving as a substitute for actually engaging characters or fun.

Why do the twists not work? Well, there's just an overall lack of humanity to the production, Rey and company don't have enough moments for us to get to know them as people. Maybe the twists would mean something if they actually resonated on a character level. Alas, The Rise of Skywalker is a movie absorbed in jumping to lightspeed from one planet to the next but not in selling the inhabitants of these otherworldly domains as actual people. The few instances of this, like Finn talking to newbie character Jannha (Naomie Ackie) about their pasts, have a sense of life to them that too much of the rest of the movie lacks. In these moments, we can truly understand the human elements at stake in this expansive intergalactic conflict. This is the kind of stuff that's made the biggest plot developments in prior Star Wars movies mean something.

The "I love you"/"I know" exchange from The Empire Strikes Back wouldn't be as heartbreaking as it is if we didn't spend time getting to know Leia and Han. Sadly, for a movie that has characters repeatedly spouting dialogue about the importance of people working together for greater goals, it doesn't seem to have much interest in everyday people. Abrams and Terrio have concocted a real messy script that can't even work as service-level nostalgia pandering when it comes to wrap things up for this "final chapter". One of the most puzzling decisions for The Rise of Skywalker as a supposed climax to a multi-film saga is to have the conflict in its second-half stem primarily from brand-new vaguely-defined villains. Why is a conclusion to an epic saga winding down with baddies who have barely any connection to our protagonists? It'd be like ending Harry Potter and the Deathly Hallows with a showdown between Harry Potter and a brand new foe named Tom.

It doesn't help that the new villains in The Rise of Skywalker themselves are mostly a snooze even when taken as just stand-alone. adversaries  Richard E. Grant gets nothing to do as a grouchy officer, ditto for the assorted Knights of Ren while Palpatine receives neither the genuine menace or the enjoyably hammy acting moments that made him such a delight in previous films. Despite the script letting down audiences hoping for an emotionally rousing climax, at least J.J. Abrams remains a competent director behind-the-camera, the film is mostly shot nicely, the alien creatures look as tangible as ever thanks to excellent practical visual effects work. The action scenes aren't anything to write home about, but at least they don't bombard you with truly grating nonsense like shaky-cam.

Best of all, and the real saving grace of the production, is that Abrams remains especially adept with actors, the performances in The Rise of Skywalker. are resoundingly strong. Daisy Ridley, John Boyega and Oscar Isaac remain an entertaining trio of performers. Meanwhile, Adam Driver takes time out from delivering exceptional dramatic indie movie turns to make lemonade out of the lemons that the script hands him. Newbie cast members like Keri Russell and Naomie Ackie don't get much to do, but they perform solidly with what they've got. As for the return of veteran Star Wars player Billy Dee Williams, he's fine in the woefully minimal amount of screentime he has.

The Rise of Skywalker never seems to know what to do with Billy Dee Williams beyond just having him pop up for the sake of nostalgia. That's not a problem exclusive to Lando Calrissian though, the writing by J.J. Abrams and Chris Terrio really fumbles badly when it comes to nostalgic callbacks and trying to unify disparate plot elements & characters into a singular story. Probably the weakest of the five Disney Star Wars movies, The Rise of Skywalker has its share of decent visuals and a talented group of actors keep it watchable. However, its bafflingly underwhelming screenplay really lets those promising elements down. The Rise of Skywalker is a movie leaning heavily on things you remember while forgetting to create something memorable of its own. In the process, it creates less of a poignant farewell to Star Wars and more of a half-hearted wave good-bye.