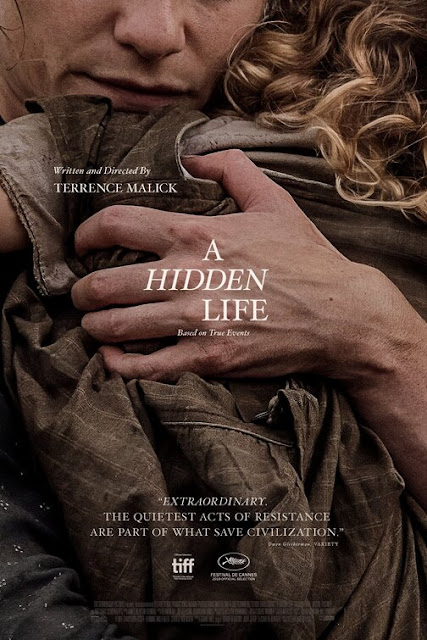 In the past, me and the works of Terrence Malick just haven't gotten along. I actually really liked Days of Heaven but much of his 21st-century-works, including his widely acclaimed The Tree of Life, ended up leaving me cold. Malick must be doing something right considering how so many of his movies have left such a profound impact on so many, but sadly, his movies have predominately left me unmoved rather than engrossed. Keeping all that in mind, watching his newest motion picture, A Hidden Life, was like a lightbulb going off in my brain. All the distinct traits of his recent works, ceaseless voice-over, slow pacing, a singular style of camerawork, that had come off as self-indulgent in other works were put to fantastic use in the context of this story. Count me in on the Malick hype for A Hidden Life, this movie truly works.


The big difference between A Hidden Life and other recent Malick efforts is that this newest movie of his has a concrete story on which Malick can project his usual visual and auditory trademarks. That concrete story concerns the true story of Franz Jagerstatter (August Diehl), an Austrian citizen living a peaceful life in the countryside with his wife, Franziska Jagerstatter (Valerie Pachner) and three children. Their family life transpires as World War II begins and the presence of Hitler's Nazi regime looms over Austria. Franz and his family live far enough away that it doesn't have a constant physical presence in their lives, though the bigotry fueling the Nazi regime certainly seeps its way into their small town.

In the earliest sections of A Hidden Life, footage of Franz being a humble farmer and Father plays out like we're watching somebody reliving wistful memories. It's as if we've been put inside the head of Franz as he thinks back on happier times during the darkest portions of his life. Malick's trademark traits as a filmmaker, namely the use use of somber whispery narration, actually aids these sections of the story to a positive degree. The visual and auditory elements that most evoke his work help to cement the dream-like quality of these tranquil sequences. These dreams eventually turn into a nightmare once Franz is called up to serve Hitler's regime and pledge his loyalty to Hitler. Franz refuses.

From here, Franz is held in a prison for disobeying his country, though even in captivity his dedication to doing good perseveres. The good-natured spirit of Franz embodies another aspect of A Hidden Life that made this newest Malick film step up above his other 2010's directorial efforts. Whereas the likes of Knight of Cups and Song to Song couldn't seem to find a singular theme to concentrate on, A Hidden Life is very much concentrated on the theme of kindness. Specifically, it's all about how important it is to maintain that kindness in even the tiniest of ways. Heck, Franz is basically the human version of Paddington Bear in how he spreads small acts of kindness wherever he goes. He even picks up an umbrella that's fallen down to the ground when he's being transported to another detainment center!

Malick's script smartly manifests the good deeds of Franz and other principal characters in small ways that fit within the restrained confines of the story. Similarly small-in-scale yet effective are the ways Franz and his fellow detainees maintain their humanity while imprisoned. The sky, the grass, conversing with any other person, any sort of connection to elements taken for granted in the outside world reminds them all that they're people and not just creatures in a cage. Just as powerful as the depiction of how Franz and the other prisoners hold onto their humanity is the cinematography by Jorg Widmer, which makes especially impressive use of shadows throughout the appropriately extensive runtime of A Hidden Life.

The majority of the interior environments in A Hidden Life are domains lit up with only natural lighting. This means there's plenty of interior shots making heavy use of pitch-blackness and shadows that are extremely evocative. On the opposite side of the visual spectrum, the broad daylight exterior shots of the environments surrounding the home Franz and his family are utterly gorgeous. If the prison Franz is trapped in is a kind of Hell on Earth, Widmer's cinematography ensures that the home of Franz is properly visually represented as a kind of Heaven on Earth. A Hidden Life is just as powerful of a visual exercise as it is a quietly moving experience. I've been left cold by some past Malick effort, but I was flat-out impressed with A Hidden Life, especially in terms of how well Malick utilized his trademark filmmaking traits to enhance this particular story about kindness as a form of rebellion.
Posted by Douglas Laman (NerdInTheBasement) at 6:12 PM