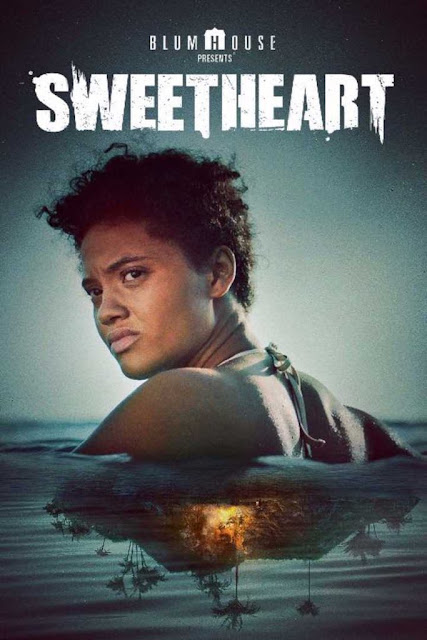 We get about five or six Blumhouse Productions movies a year that get major theatrical releases, the likes of Get Out, The Purge and Halloween (2018) but what about the rest of Blumhouse's annual output? The Jason Blum-run production outfit actually releases more films annually than you might realize, they just end up getting way less prolific direct-to-video bows after brief film festival runs. Such a fate is the one seen by their 2019 feature Sweetheart, a new directorial effort hailing from J.D. Dillard, the filmmaker behind the 2017 film Sleight. After debuting at the Sundance Film Festival this past January, Sweetheart basically vanished before getting dropped on digital retailers in October (currently, there is no physical home video release for the title).


It's a pity Sweetheart got such an unceremonious release considering I'd been looking forward to it for quite a while. Sleight was such a unique take on grounded superhero storytelling, anything its director did next I would be immediately interested in. Having Kiersey Clemons headlined such a project, well, that's just icing on the cake. The project Dillard and Clemons have united for begins with a woman, Jenn (Kiersey Clemons), washing ashore on a deserted island. We don't know anything else about her, we get no flashbacks to her previous life, we just know she's now alone on this island and trying to survive.

Dillard's screenplay shows remarkable restraint in a number of areas in Sweetheart but especially in this sections of the feature concentrated exclusively on Jenn navigating the island alone. Here, Sweetheart was reminding me of Mads Mikkelsen's Arctic in how it's such a streamlined production focused entirely on just a human being defined solely by the need to survive. Dialogue from Jenn is minimal, concrete answers about her past are kept hidden from the audience and even the gradual reveal that there's something else on this island is handled with subtle care. That other creature Jenn has to deal with is some kind of humanoid-shark monster, one that seems to have the head of the Colossal monster but the body of the beast from The Shape of Water.

Midway through Sweetheart, though, it begins to shift gears. The arrival of two more of Jenn's also stranded friends to the island, one of them being a boyfriend played by Emory Cohen, brings with them the introduction of the core theme of Sweetheart. Specifically, this J.D. Dillard directorial effort is now serving as an allegory for the phenomenon of people not believing stories from women about their experiences being sexually assaulted or otherwise abused. It's a clever idea to use the tale of a woman evading a sea monster as a parallel for how people don't believe or outright erase the experiences women have at the hands of real-world monsters like Harvey Weinstein or Donald Trump.

But Sweetheart's script (penned by Dillard as well as Alex Hyner and Alex Theurer) struggles to make the introduction of this core theme feel an organic extension of what came before it. Up to this point, Jenn's been such an intentionally vaguely-defined person so that the focus can be on her trying to survive on the island. Suddenly unloading a whole backstory involving her struggling to have other people believe her hardships just comes off as an abrupt detour without any proper build-up. On the plus side, the way disbelief over Jenn's experiences manifests, particularly with Cohen's character, through small but harmful maneuvers like dismissive dialogue ("You're just tired!") are at least effectively true to life.

Individually, the two halves of Sweetheart are quite interesting and filtering these specific experiences of women struggling to be believed through a horror movie lens is a brilliant idea. As executed here, though, putting those halves together makes the whole production feel disjointed. Both J.D. Dillard's direction and Kiersey Clemons' performance help to compensate somewhat for the erratic quality of Sweethart. Clemons especially excels here as she gets to show off how naturally dialogue-free acting comes to her in the first-half of Sweetheart. Though it's messy and doesn't live up to its potential, Sweetheart at least delivers a strong Kiersey Clemons performance and lets this performer fight a shark-monster, that's not nothing.
Posted by Douglas Laman (NerdInTheBasement) at 2:33 PM