Con Air Is Anything-Goes Ridiculousness, Which Is A Good Thing 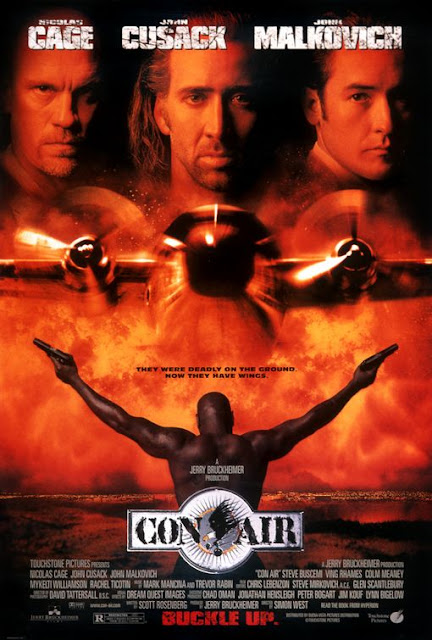 Con Air begins and ends as a music video for How Do I Live by Trisha Yearwood. In between, a lot of recognizable actors dodge explosions. This is the aptest summary for the directorial debut of Simon West, which might be the epitome of the 1990's American action movie filmmaking if Face/Off didn't exist. That doesn't mean Con Air is the absolute best American action movie made in this era, but it does embody a number of the traits found in abundance in this era. A plot clearly aping Die Hard. Lots of R-rated action. Dialogue that runs the gamut from cornball to unbelievably hokey. Recognizable landmarks going boom. Oh, and it's also pretty fun to watch.


How did protagonist Cameron Poe (Nicolas Cage) end up on Con Air, a flight designated for the worst criminals on the planet? Well, the opening scene of the motion picture shows that Poe is a criminal but he's a nice kind of criminal, don't ya see. He's in here for involuntary manslaughter after killing a dude in a fight with some people harassing himself and his wife outside a bar. With his thick Southern drawl and a fervent desire to get back home to meet his daughter for the first time, Poe is the "Aw shucks!" guy on any given chain-gang and now he's been put on Con Air so that he can be transported to his home as part of his release. Poe is going home!

Well, at least, that was supposed to be the plan. Wouldn't ya know it, Poe is trapped on a flight with criminal mastermind Cyrus "The Virus" Grissom (John Malkovich) and he's managed to orchestrate, along with the aid of numerous other deadly convicts, an escape that see's the plane being taken over by prisoners. Poe has now got to put on the act of being a vicious criminal so that he can have a hope of taking down Cyrus and his gang. The script for this feature, solely credited to Scott Rosenberg, is amusingly overstuffed for a movie that's basically just about Nicolas Cage looking to stop John Malkovich from using a plane for nefarious means.
For instance, Cameron Poe isn't just determined to keep his identity a secret to protect his family, he's also got to get some medicine for his diabetic friend Mike O'Dell (Mykelti Williamson). The presence of dangerous criminals overtaking an airplane isn't enough to generate tension in Con Air, there also has to be a ticking clock connected to getting Mike his medicine on-time. At least that subplot is connected to the lead character though. Numerous moments in Con Air ditch Cameron Poe entirely to focus exclusively on supporting character Garland Greene (Steve Buscemi), one of the deadliest serial killers to walk the Earth. Greene has no impact on the plot or other characters, he's basically in a whole other movie.

However, Buscemi is highly amusing portraying a soft-spoken intellectual who also slaughters innocent people and maybe that's enough to justify his presence in a movie like Con Air, which is all about surface-level in-the-moment pleasures. The movie certainly has plenty of those, particularly when it comes to the unhinged performances of a cast comprised of actors like Nicolas Cage and John Malkovich who tend to do their best work when they get to let their freak flag fly. Director Simon West realizes this and just lets these performers chew the scenery and ham up their dialogue deliveries like there's no tomorrow. The uninhibited ridiculousness proves exciting more often than not.

Really, the only part of the movie that pushes the anything-goes approach too far is an extra climactic chase scene, not because of its ridiculousness but because it both feels too tacked on coming after a scene of a gigantic airplane crushing the Las Vegas strip and it feels too divorced from the central airplane conceit. Any action movie could feature a chase scene involving a fire truck, an airplane action movie like Con Air should be focused on doing set pieces set in the sky and involving elements related to aircraft. That's a minor note though in Con Air, a movie that otherwise will handily scratch your itch for 1990's action movies, reminders that Nicolas Cage is an entertaining joy in nearly everything and Trisha Yearwood needle drops.

Posted by Douglas Laman (NerdInTheBasement) at 10:40 AM