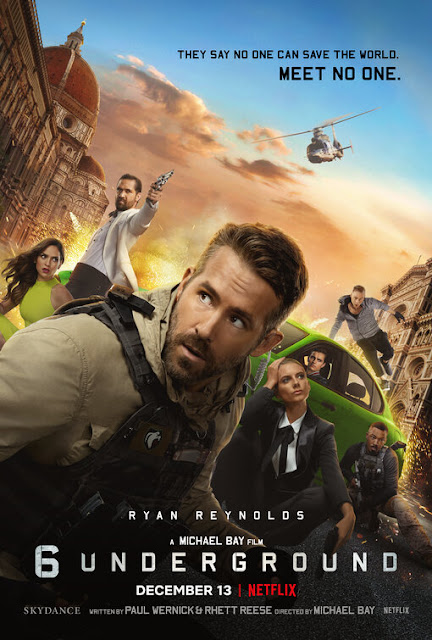 Two very distinct creative talents have formed a union to bring the new Netflix blockbuster 6 Underground to life. In one corner, we have director Michael Bay, the man behind the first five Transformers movies and an assortment of other high-octane action films. In the other corner, we have the writing duo of Rhett Reese & Paul Wernick, the screenwriters who penned the two Deadpool movies. Though both known for making movies where big things blow up, their sensibilities are quite different. Bay is known for his lavish hyperactively edited visual-oriented productions whereas Reese & Wernick tend to work in the confines of mid-budget comedic exercises relying heavily on snappy self-referential dialogue.


Putting their differing approaches together for 6 Underground results in a heavily disjointed movie that's far more tedious than it should be, though you wouldn't know that by the opening sequence. Much like Takashi Miike's Dead or Alive, 6 Underground chooses to open with a gung-ho scene that just throws everything and the kitchen sink at the audience. A car chase through Florence, Italy sends cars into random bursts of explosions, comically takes out innocent civilians with abandon and makes sure to linger on a slow-motion shot of two puppies narrowly avoiding getting hit by a car. The violence is bloody and cartoony while Bay's traditional style of editing and color palette is unmistakably present.

This opening scene introduces us to the majority of our half-dozen lead characters, a group of individuals who faked their own deaths and now live as "ghosts" who take out bad guys without having to deal with government interference. It's amusing how much they resemble the lead characters of a Saturday Morning Cartoon, they even have a secret headquarters and a doggie sidekick! The group all goes by numbers rather than names so that none of them develop emotional attachments on another and are led by One (Ryan Reynolds). Corey Hawkins, Melanie Laurent and Ben Hardy are among the actors playing the other five lead characters.

All of these actors are tasked with how Reese and Wernick's screenplay makes the puzzling decision to make 6 Underground a convoluted production rather than a lean and mean one. The script frequently makes use of extended non-linear digressions to explore the backstories of the lead characters, who are all so thinly-sketched that you wonder why the movie is spending so much time on making sure we understand their individual one-note personalities. This is especially true of the character of One, a pretty boring protagonist with a predictable tragic backstory that the film keeps going back to over and over again.

Why're we wasting time with One's origin story when we could be watching things explode? Aren't Michael Bay movies supposed to be wall-to-wall explosions? Unfortunately, that's not the case here as Reese and Wernick actually opt to frame 6 Underground as more of a heist movie (though the heist being pulled off here is a coup d'etat rather than, say, stealing jewels) for much of its runtime. This turns out to be a bad idea for a multitude of reasons. Chief among those reasons is the fact that heist movies live or die based on how entertaining their characters are and the lead characters of 6 Underground are either tedious or grating. That latter word is a perfect descriptor for ceaselessly aggravating comic relief character Three (Manuel Garcia-Rulfo).

You won't be eager for the characters of 6 Underground to pull off their mission, you'll just be eager for the explosions to start so they can cease trading limp dialogue. The character-driven nature inherent to a heist movie also turns out to be a bad choice for Michael Bay as a filmmaker. Bay is a director who's clearly got an affinity and a gift for creating distinctive bombastic imagery. It's why he excelled as a director in music videos and why certain images in his cinematic works have managed to become outright iconic. Bay's works have also made it clear that he couldn't care less about characters, it's why (among numerous other problems) his attempt at doing a romantic drama with Pearl Harbor failed so badly.

Bay's direction in more intimate dialogue-driven scenes is utterly lifeless and the same can be said for the robotically-executed scenes dedicated to the characters of 6 Underground going through the predictable route of learning they might actually need to care about one another. Reese and Wernick's script is already a largely flat dudebro take on the heist movie genre, but giving something this dialogue-heavy to Bay was a mistake. Giving the lead role one One to Ryan Reynolds was also a mistake, Reynolds keeps swerving around from grizzled reserved lead to just being Deadpool again (the latter trait being especially apparent in a groan-worthy gag where One recites the opening to Eminem's Lose Yourself) in his performance. Plenty of buzzy talent has been assembled for 6 Underground but what good is getting all these famous names together if they're being used on such a lackluster project? Plastering Ryan Reynolds' name on the poster can't disguise the fact that 6 Underground is way more monotonous than a Michael Bay movie should be.
Posted by Douglas Laman (NerdInTheBasement) at 12:13 PM