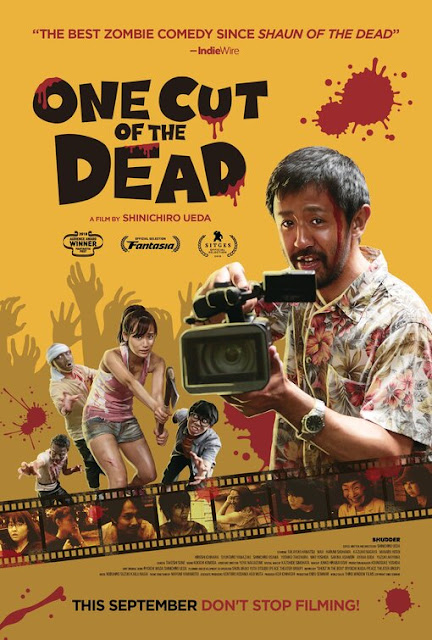 I've mentioned this in prior reviews, but when I'm watching a movie, I tend to live in the present. Sometimes I can predict plot beats coming a mile away if a movie is really just tedious, but usually I'm like a horse on a racetrack; stuck with blinders on that keep me focused on only what's in front of me. I'm not sure if that's something related to my particular form of Autism or if that's just a Douglas Laman thing, but this means twists and turns in movies tend to hit me extra hard. This means the barrage of already clever surprises that make up the crux of One Cut of the Dead were like a revelation to me. Going into this movie totally unaware of what it was beyond just being the newest acclaimed zombie comedy made this such a rich and exciting cinematic experience!


At first, One Cut of the Dead seems like it's an impressively-executed project whose central conceit is easy to get. A group of actors, working under a demanding director, Takayuki Higurashi (Takayuki Hamatsu), are filming a zombie movie in an abandoned warehouse that apparently was used for human experimentation in World War II. Just a spooky old ghost story, right? Well, it is, until zombies begin to start attacking the cast & crew. The dwindling amount of surviving people on the set race to stay one step ahead of the rampaging zombies, with everything being captured in the space of a single-extended take.

Yep, One Cut of the Dead's title isn't lying. Heck, I had to pull a "Could Have Had A V8" on myself when I realized that, of course, the title was referring to this Shinichiro Ueda directorial effort pulling a Birdman/1917 and capturing everything in one shot. That alone gives One Cut of the Dead something unique to differentiate itself among the crowded zombie movie crowd and helps to cement the urgency of the situation the few survivors have found themselves thrust into. While there are dark comedic flourishes tossed in, chiefly in the recurring humorously random appearances of the abrasive director, One Cut of the Dead totally works as a propulsive survival thriller. But it turns out, that's not all this movie has up its sleeve.

37 minutes in, this part of One Cut of the Dead ends and a wholly new movie begins.

Now shot in a traditional style rather than the previously default one-take format, One Cut of the Dead now pulls back the curtain to reveal that all that we've just seen is actually a staged live program to promote a new zombie-themed streaming network. Flashing back to a few weeks prior, we learn that the abrasive director was played by the actual director of the program, a guy previously known for commercials whose tasked with pulling off this elaborate event. Like any live performance, not everything goes according to plan and it's here that the audience gets to see the first-third of One Cut of the Dead from a whole new perspective.

Previously, we'd been limited to a single camera continuously capturing footage from the perspective of somebody in the middle of a zombie apocalypse. Now, we get to see the assorted cast & crew members scrambling to pull this off, in the process delivering countless delightful explanations for certain oddities that transpired in the earlier segments of the runtime. Previous of strangeness that could be attributed to the film’s comedic tone now have these perfectly hysterical explanations behind them. One guy racing out into the zombie-infested outdoors turns out to be a result of his repeatedly easily upset stomach. My favorite of these, though, is the mysterious creature that corners the in-universe zombie movie protagonist in a shed. Previously, we’d only seen the creature's legs in a shot whose framing totally felt at home in a traditional monster movie. This particular visual choice was to keep us at the eye-level of the in-movie characters.

But now, we got to see that the reason we only saw the legs was because they belonged to a random crew member who was just giving written instructions to the actors. A beat that previously worked perfectly as a horror moment now gets to work equally well as a comedic one. One Cut of the Dead’s clever script and direction is great at consistently working on multiple levels like that. The assorted performances in the cast are similarly capable of delivering Russian Nesting Doll-esque turns, particularly Harumi Shuhama as a no-nonsense survivalist makeup artist in the initial segment and then as a hysterical immersive actor in the later sequences. Shuhama's acting is delightfully layered and so is One Cut of the Dead as an entire movie. We've had plenty of zombie comedies before but none of them have been quite like One Cut of the Dead!
Posted by Douglas Laman (NerdInTheBasement) at 1:57 PM