Bombshell Lets Down Essential Perspectives With A Poor Movie 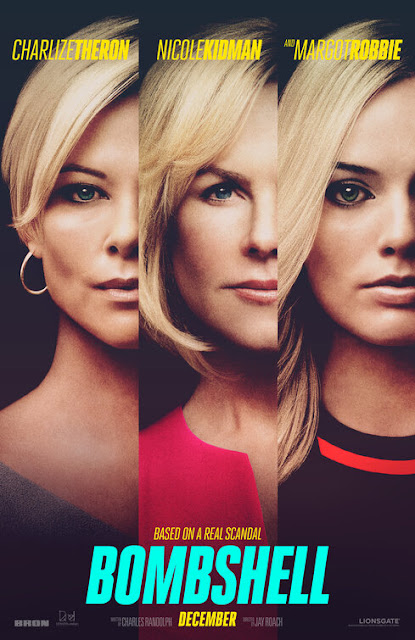 Based on the true stories regarding sexual harassment and sexual assault cases at Fox News, Bombshell chronicles a trio of individual stories each centered on a different woman (two of them being actual people, one of them being a fictional creation) working for Fox News, in-film narrator Megyn Kelly (Charlize Theron), Gretchen Carlson (Nicole Kidman) and newbie employee Kayla Pospisil (Margot Robbie). Bombshell explores the work environment they reside in as well as the gradually increasing presence of a sexual harassment lawsuit (one spurred on by Gretchen Carlson) brewing against the network and its founder, Roger Ailes (John Lithgow).


Ripped straight from the headlines, Charles Randolph's screenplay tackles urgently relevant real-world material and flattens it into a stodgy poorly-assembled drama. Despite having three separate storylines to work with and a whole slew of impressions of famous Fox News personalities, Bombshell ends up being emptier than a bear's stomach in the wintertime. Randolph's script is heavy on characters explaining things to the viewer through fourth-wall breaking side-tangents trying to recapture the magic of similar expository elements in Randolph's screenplay for The Big Short. In Bombshell, such explanations are so clumsily executed and lacking in imagination that they honestly make me regret my high level of praise for The Big Short.

Randolph is super-duper interested in the inner mechanics of how the building Fox News is housed in is organized but he's far less interested in actually exploring the assorted characters in Bombshell as people. The characters in Bombshell are like the inhabitants in a particularly weak Saturday Night Live cold open sketch, a bunch of surprise celebrity cameos and distracting makeup work, but no human beings. Such shallow treatment is fine when it comes to a monster like Roger Ailes (brought to life with legitimately impressive makeup work and an imposing John Lithgow performance), but what about Bombshell's depictions of its lead characters who are grappling with sexual harassment/assault experiences?

We never get time to actually explore them as people in the hands of Randolph's script. The closest we get to any dimensional exploration of our lead characters are brief explorations of Kayla Popisil's sexuality. Otherwise, the screenplay is too busy packing in as many familiar media figure faces and real-world events into a single feature film to bother fleshing out its versions of Megyn Kelly and Gretchen Carlson. This is especially irritating considering you've got the likes of Charlize Theron and Nicole Kidman headlining such a thinly-sketched project. Theron nails Megyn Kelly's vocal patterns, but Theron is so much more as a performer than just an impressionist, a fact Bombshell's script totally seems to have missed.

The lifeless nature of Bombshell's screenplay is only reinforced by director Jay Roach's similarly forgettable direction. Roach's last decade of directorial work (which includes the movie Trumbo and a smattering of HBO properties) has been fixated almost exclusively on stories about or related to American politics. However, I'll be darned if any sort of explicit perspective or vision has emerged in Roach's extensive experience exploring this topic. Roach's primary creative motif in his recent directorial output is merely recognizing that big news stories did, in fact, happen and that motif marches onward with his incredibly generic work behind the camera on Bombshell.

There's nary an interesting visual flourish to be found in here in Bombshell, it's all so stagnantly staged. Worse than those qualities is Roach's choice to coat numerous actors (chiefly Kevin Dorff as Bill O'Reilly) in distracting extensive makeup so that they can resemble their real-world counterparts. That part of Bombshell will make you grateful A Beautiful Day In The Neighborhood just let Tom Hanks, rather than layers of pointless makeup work, sell you on its version of Mister Rogers. Director Jay Roach is on autopilot while screenwriter Charles Randolph's Aaron Sorkin-light script is a frustratingly shallow creation. The experiences that inspired Bombshell deserved an actual film made about their perspectives. They didn't deserve this tedious motion picture more interested in trotting out impersonations of famous faces than exploring sexual harassment/assault survivors as people.
Posted by Douglas Laman (NerdInTheBasement) at 2:08 PM