Noah Baumbach's Marriage Story Is A Powerful Piece of Filmmaking 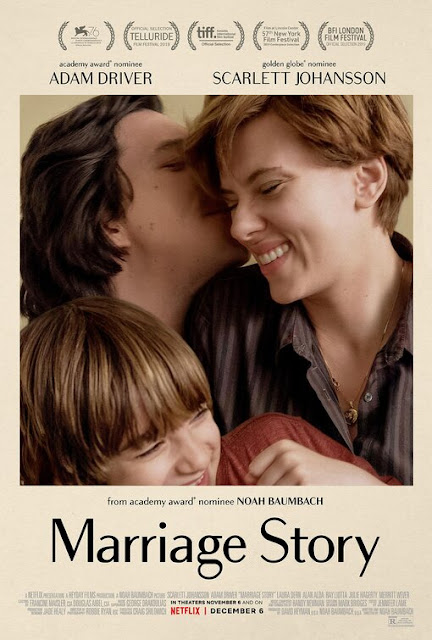 In many ways, it feels like Noah Baumbach has been working his whole career to get to the point where he could make Marriage Story. Throughout his nearly quarter-of-a-century of making movies, fractured families have been a recurring element across a number of his works. The concept of people you're supposed to be closest to having deep-seated problems with one another is one that Baumbach's explored plenty of times beforehand, but never in as insightful of a manner as he has with Marriage Story. Here, the scope is grander, the characters are richer in detail and the emotional moments really hit you in both the gut and the heart. 1995 Noah Baumbach couldn't have made a movie like Marriage Story that so unflinchingly tackles the complexities of going through with a  divorce. Turns out, waiting for him to be ready as a filmmaker was more than worth the wait.


Who exactly is getting a divorce in Marriage Story? Well, that would be Nicole Barber (Scarlett Johansson) and Charlie Barber (Adam Driver). The former is an actress who moved to New York City ten years ago to live with the latter individual, an experimental theater director. Since then, they've developed a whole life together that includes an eight-year-old son, Henry (Azhy Robinson). However, tensions between the couple have reached a point where their relationship can't go on. It's time for Nicole to take some control of her life again, which she begins to do by taking a TV acting gig in Los Angeles. With both parents living in different states, Nicole and Charlie try their best to navigate a new parenting dynamic while also exploring the tricky domain of actually going through with a divorce.

Marriage Story is a movie about divorce but one of the best parts of Noah Baumbach's script is how the lead characters aren't singularly defined by the process of leaving one another. This is made apparent in the very first scene, which consists of footage of Nicole and Charlie engaging in everyday parent duties while voice-over from each character plays complimenting the other on their best strengths as parents. From here, a number of key defining characteristics emerge from each of our two lead characters that appropriately paint them as complex individuals. Such complexity is beautifully reinforced in how Baumbach constantly brings these characteristics, like how Charlie is super energy-conscious, in realistically subdued ways throughout the movie.

This is one of the many ways Baumbach makes the people in Marriage Story such believable human beings, one whose individual perspectives you can fully understand. Many movies about divorce or relationships crumbling are about the big sweeping fights or, whether intentionally or not, reduce one side of the relationship to a brash caricature. But in the case of Marriage Story, we see the intimate toll this divorce is taking on both Nicole and Charlie, it's not an easy process for either one of them and they don't immediately become fiery adversaries once they separate. They still see each other frequently, they tell their lawyers they don't want a big sprawling fight and Nicole even cuts Charlie's hair like old times.

Their dynamic in the process of divorce is not one that can be boiled down easily and that's a rapport that proves to be endlessly engaging. It helps that Baumbach's script is more than up for handling all those complexities and the same can be said for the pair of lead performances. Scarlett Johansson, for instance, gets a number of scenes that serve as basically showcases for her chops as an actor. Johansson is remarkable in portraying Nicole as a person finally getting to express herself after years spent in a marriage that kept chipping away at her humanity, particularly in an extended single-take scene showing her going through a rollercoaster of emotions relaying the experience of being in love with Charlie to her lawyer Nore (Laura Dern in her second top-notch supporting film turn of 2019)

Something I love about how Johansson portrays this scene is that she plays Nicole's dialogue delivery kind of like it's a run-on sentence. Nicole isn't used to having such prolonged periods of time dedicated to her expressing her mind, she's usually too busy fulfilling the duties of being a Mom or whatever new artistic passions Charlie is enamored with. Now that she has a chance to actually express her own worldview, Nicole is gonna run and run with it. It's a tiny detail in Johansson's performance in this scene that just says so much about who the character is, what she's going through.  Her work in the lead role is a perfect complement to the similarly insightful writing of Noah Baumbach.

The same can be said for the equally impressive work delivered by Adam Driver. A regular in Noah Baumbach modern-day works, Driver is similarly adept at expressing his character's perspective in the tiniest of ways, though that trait is applied to Charlie's specific experience of coming to terms with the cavalcade of change in his life. All of Driver's performance is great, but I was especially taken by how well he portrays the imperfect Dad side of Charlie. Calvin's Father in Calvin & Hobbes once said "I wouldn't have been in such a rush to be a grown-up if I knew so much of it was gonna be improvised" and that quote raced through my head a lot when watching Driver authentically portraying Charlie as a guy trying to navigate what it means to be a good Dad in these turbulent circumstances.

Johansson and Driver are surrounded by a cast so stacked with exemplary work that it includes a brief scene-stealing turn from Wallace Shawn. Meanwhile, Randy Newman's score is a lovely compliment to the atmosphere of the whole project. Much like Nicholas Brittel's (albeit far more romantic) If Beale Street Could Talk score from last year, Newman's score is a pronounced work meant to vividly convey internal emotions of characters who have to primarily keep their own feelings bottled up inside. Noah Baumbach's exceptional direction similarly serves as a vivid extension of the interior emotions of Nicole and Charlie, especially in the way empty space in the frame is thoughtfully utilized in scenes set in Los Angeles. In these respects and so many more, Marriage Story beautifully captures the complex experiences of its two lead characters. This means it's a tough watch in certain spots (this is a movie about people engaging in the process of divorce, after all) but it also means Marriage Story ends up being the best thing Noah Baumbach has created as a filmmaker to date.
Posted by Douglas Laman (NerdInTheBasement) at 11:37 AM