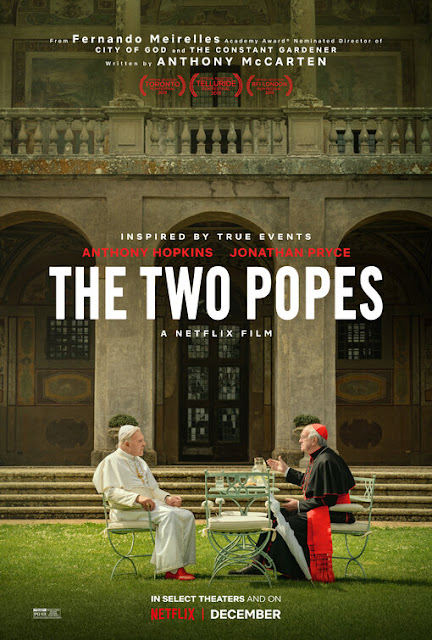 The idea that the best leaders are the ones who don't want to become a leader is heard early on in The Two Popes and it's an apt descriptor for Cardinal Jorge Mario Bergoglio (Jonathan Pryce). An easygoing fellow open to new practices (a sharp contrast to the Catholic Church's default to tradition) and who works as the Archbishop of Buenos Aires, Bergoglio is preparing to retire. This is a task that requires him to get the permission of the current Pope, Benedict XVI (Anthony Hopkins), who's the total opposite of Bergoglio in every way. Turns out, Bergoglio's prospective retirement is coming just as Benedict XVI is facing a slew of scandals that mean he could use the aid of Bergoglio.


Before it becomes clear how Benedict needs Bergoglio's help as much as Bergoglio could use Benedict's approval for retirement, The Two Popes is content to have these two Pope's (one currently in the position of power, the one unknowingly set to gain the title one day) hash out their differing personalities and approach to the Catholic Church in debates. One's a strict rule follower, the other one's a loose cannon who likes pizza. No, they're not the stars of a NBC sitcom, that's the dynamic at the heart of The Two Popes, a new feature film from Fernando Meirelles, one of the two directors of City of God.

The Two Popes is a simple movie, even on a character level. Despite so much of the screentime being spent on the dialogue between our two lead characters, the screenplay by Darkest Hour writer Anthony McCarten doesn't so much make two Popes human beings as it does render them as broad Odd Couple archetypes. Sometimes they stand-in for certain political ideologies (no prize for what Benedict XVI is supposed to represent when he goes on a tangent emphasizing the importance of walls). Sometimes they serve as vessels for comedy stemming from the juxtaposition of religious figures engaging in casual activities like drinking Fanta soda. Most of the time, though, The Two Popes engages with its central characters in a surface-level way.

This lack of deeper introspection means The Two Popes is as fluffy as a cloud, its casual hangout vibe never leads anywhere deeper nor does it deliver exceptionally enjoyable light entertaining. This approach is mostly inoffensive at least, save for how this tone trips up any of the times The Two Pope's tries to tackle darker material, chiefly the Catholic Church sexual abuse cases. However, this thinly-sketched affair does ensure that two reliably solid performances are around to help carry the two-hour runtime. If legendary performer Jonathan Pryce could deliver fine work in The Man Who Invented Christmas, it's no surprise to see that he delivers a good lead performance under the direction of one of the two City of God directors.

The best quality Pryce brings to his turn as Bergoglio is a believable sense of easiness. Pryce's Bergoglio is a man whose everyman manner never feels like a strained act, it comes as natural as can be. You can totally see yourself feeling at ease around such an amiable guy. Pryce's work in The Two Popes thrives on a sense of tangible humanity the script struggles to capture. Of the two leads, Hopkins has the more rigidly-defined character to play in the form of tradition-bound Pope Benedict XVI. However, that doesn't stop Hopkins from communicating an effective sense of weariness in his performance. As The Two Popes goes on, Hopkins nicely captures how the growing complexities of this job are taking its toll on this religious leader.

Fernando Meirelles' direction opts heavily for grand wide shots that allow for every nook and cranny of the assorted decadent environments (including set recreations of rooms in The Vatican) that the two titular lead characters converse in. The Two Popes is not short on extravagant production design, that's for certain, though such lavish visual choices are in service of a screenplay that ultimately keeps The Two Popes from fulfilling its fullest potential. This is frequently an agreeable motion picture but it's one that also takes safe and easy narrative routes, especially in terms of rendering the rapport of its lead characters as a super predictable odd couple routine. The Two Popes is blessed with two noteworthy central performances but it could use some forgiveness for its more derivative storytelling elements.
Posted by Douglas Laman (NerdInTheBasement) at 3:02 PM