Hotel by the River Quietly Captures Humans Struggling To Connect 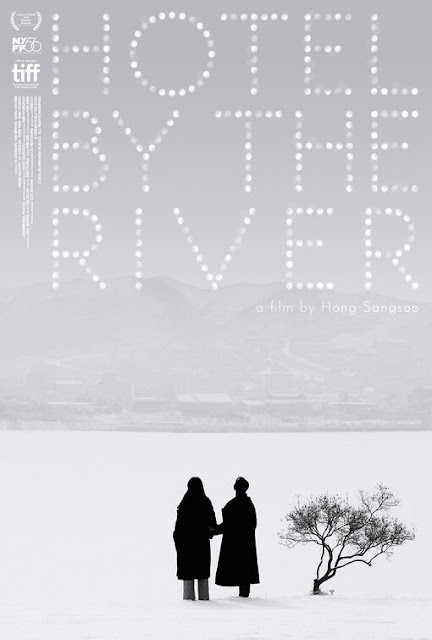 Winter always gets me into a melancholy reflective mood. It's hard to put into words why, but it's reassuring to know that I'm not the only one whose introspective mood tends to intersect with the chilly weather. Poet Young-Hwan (Ju-bong Gi) is also having the same kind of contemplative mood as the snow falls outside, though his own personal circumstances are informing his current mindset more than the external weather. As he sits in his hotel room, he decides to call up his two estranged sons, Kyung-Soo (Hae-hyo Kwon) and Byung-Soo (Joon-Sang Yang) to meet up with him in the lobby of the hotel.

Seeing that this is a movie, this seemingly simple meet-up soon becomes anything but as Young-Hwan and his son manage to miss each other in the lobby. Their struggles are observed by a sort of Greek chorus in the form of two ladies also staying at the hotel, A-Reum (Min-hee Kim) and Yeon-Joo (Seon-mi Song). This intimate tale comprised of just five players serves as the focus for Hotel by the River, a Sang-soo Hong directorial effort from earlier this year that serves as my personal introduction to the acclaimed South Korean filmmakers work. Though I can't say if its emblematic of  his filmmaking approach for the majority of his filmography, Sang-soo Hong tends to opt for restrained visual choices in Hotel by the River.

Though there's plenty of tension, stemming from everything to Young-Hwan's absence as a parent to the height of one of his kids, brewing between the three family members at the heart of the movie, Sang-soo Hong persistently keeps his camera still. The people on-screen may be motivated by chaotic emotions but the camera capturing them is anything but chaotic. A sense of measured calm is exuded by Sang-soo Hong's direction that makes the film as calm as a stroll through a snowy field. It's an interesting visual approach, even if there are instances where this specific execution of a muted style of directing ends up working too well at muting the emotions of the characters to the point that you're momentarily outright detached from their plights.

Some of this occasional struggle to connect with what's happening on-screen does stem from instances where Sang-soo Hong's script keeps the characters too under wraps. It's true that less is more but a bit more concrete personality on the two son characters, for instance, could have laid an even better dramatic foundation for the complex dynamic they have with their father. On the other hand, the numerous character-related elements that do work well in the script for Hotel by the River end up being exceptional. This is especially true in regards to the handling of the characters of A-Reum and Yeon-Joo, who exist on the periphery of the primary storyline involving an old poet and his two sons.

It's fascinating to ponder how well these these two characters function at filling various different types of roles in the story without breaking the extremely grounded style of storytelling Sang-soo Hong is aiming for. Sometimes, they're people basically going through their own separate movie, sometimes they serve as voices for the thoughts of the audience, sometimes their easygoing rapport with each other reinforces just how much difficulty Young-Hwan and his sons are having even looking at each other. These two are such malleable individuals that can do so much in Hotel by the River yet they're still able to resonate as detailed human beings in their own right. It helps half of this duo is played by Min-hee Kim, who, as those who saw The Handmaiden can attest, is an effortlessly riveting performer.

Maybe the best way this duo crosses over into the plight of Young-Hwan is a recurring quietly tragic bit involving Young-Hwan being able to make conversation so easily with these two strangers at the hotel while he struggles to connect with his estranged children. Among the many functions they serve in Hotel by the River, A-Reum and Yeon-Joon also serve as a way to cement the difficulties the protagonist of this movie has with connecting with his own flesh and blood. I may have admired Hotel by the River more than I was bowled over by it, but it's those moments of haunting human tragedy that made me recognize that Sang-soo Hong is widely acclaimed as a writer and a filmmaker for a reason.
Posted by Douglas Laman (NerdInTheBasement) at 10:34 AM