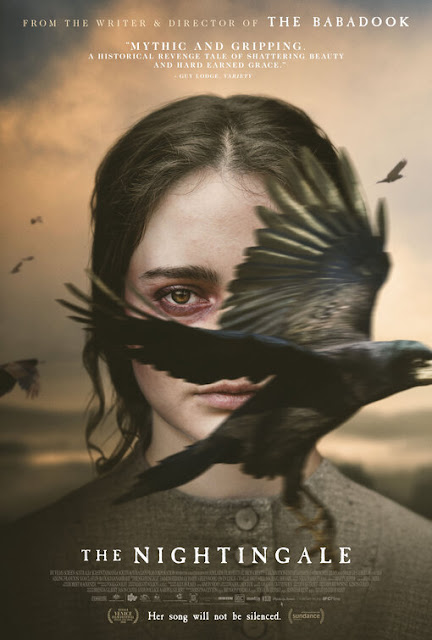 CW: Discussions of Sexual Assault ahead

The first word that pops into my mind when thinking about The Nightingale is "uncompromising". Jennifer Kent's new film, her follow-up to her horror movie sensation The Babadook, is the farthest thing one could imagine from a cookie-cutter major studio production with its bleak examination of how English settlers dehumanized members of marginalized populations, like women and Aboriginal Australians. It's something that evokes Au Hasard Balthazar in numerous moments in its unflinching darkness. Kent's filmmaking is wall-to-wall misery but it isn't just empty gruesomeness. This is an extremely appropriate tone, especially in the way she executes it, for the bleak story she's seeking to tell here.

Said bleak story concerns Clare Carroll (Aisling Franciosi), an Irish criminal working for Lieutenant Hawkins (Sam Claflin). Her time working for the British soldiers is one rife with horrors, including Hawkins sexually assaulting her and refusing to let Carroll out of her contract for servitude. Carroll at least has a semblance of a life beyond just her duties for Hawkins as she has a husband and a baby. Both of those things are taken away from her one gruesome night when Hawkins shows up to Carroll's home with two other men. They proceed to rape Clare Carroll and kill her partner and their child. It's an experience that leaves her scarred, horrified and also thirsting for revenge.

Soon discovering that nobody with any authority is going to help her, Carroll sets out with a tracker by the name of "Billy" Mangana (Baykali Ganambarr) to seek out Hawkins, whose assembled a troop to pursue a high-ranking military job. While much of the anguish of this tale is told through on-screen depictions of human misery, The Nightingale also smartly captures aspects of societal oppression that don't manifest in physical forms. Jennifer Kent's screenplay is able to effectively communicate how the structure of the society Clare Carroll inhabits is inherently designed to make sure she has no say, that the horrors perpetrated against her can go on unpunished. Just as terrifying as on-screen violence is how The Nightingale portrays how systemic oppression is carried on in even seemingly mundane ways.

Its exploration of systemic oppression extends beyond just how Australia circa. the 1820's treated women, The Nightingale is also concerned with how natives of Australia have been enslaved and cruelly treated by white settlers. As a white person, I shouldn't be the utmost authority on if The Nightingale treats this subject with respect or not, but I can say its approach to this topic did strike me as well-done. This is mostly due to how exploring this topic helps to reinforce how widespread societally-ingrained prejudice is and how Kent's script makes sure that Mangana and even side PoC characters human beings are rendered as individuals with distinct personalities. This ensures that Clare Carroll is not the only person dehumanized by Australian society that The Nightingale seeks to frame as actually a human being.

Kent's direction similarly tackles this heady topic with remarkable results, her steady camerawork capturing on-screen brutality makes one sick to their stomach as it should. The Nightingale seeks to pull back the curtain on societal oppression minimized both in the past and present and Kent's harrowing direction fulfills that objective impressively.  Both her direction and the editing by Simon Njoo are extremely precise in how they visually-execute the most gut-wrenching sequences in The Nightingale, each cut and position of the camera helps to enhance the appropriately overwhelming nature of key disturbing scenes of The Nightingale. Meanwhile, Kent's thoughtful writing ensures that the characters are always so well-defined that the onscreen carnage never just becomes empty woe.

Aisling Franciosi's lead performance is similarly capable of capturing humanity in even the most pain-drenched stretches of The Nightingale. Franciosi's whole lead turn here is incredible but I'm especially struck by her powerful facial expressions, Kent can just let the camera linger on her face for moments on end knowing that Franciosi is capable of communicating endless agony through just her eyes. Speaking of great casting, clever move putting Sam Claflin, usually a loveable heartthrob in movies, in the role of a scumbag British general with seemingly no limit to the depraved acts he'll commit. It's a role that Clafin brings actual menace to and serves as just one of the many ways Jennifer Kent's The Nightingale effectively and terrifyingly realizes real-world horrors.
Posted by Douglas Laman (NerdInTheBasement) at 1:52 PM