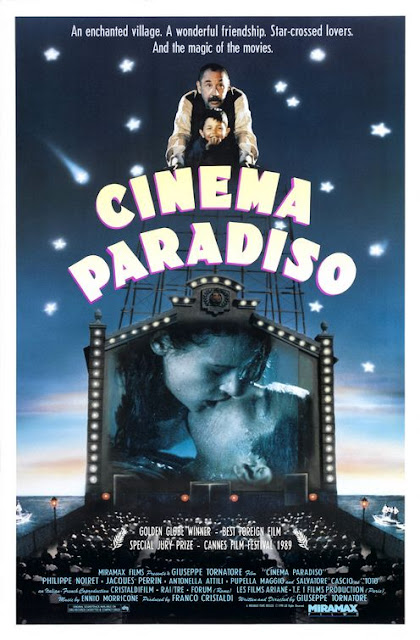 Unless you’re Paul Schrader, chances are you have fond childhood memories connected to cinema if you’re an adult devotee of movies. For me, it’s my faint memories of being an expert in inserting and ejecting VHS tapes in my families VCR player before I even learned how to talk! That kind of childhood connection to cinema can have long term effects that are felt well into adulthood and Giuseppe Tornatore’s Oscar-winning feature Cinema Paradiso isn’t just aware of this, it’s the foundation on which the entire story is built. Unlike sand, the experience of youthful love for cinema turns out to be a great foundation on which to build something.

Salvatore Di Vita wasn’t always a household name of a filmmaker. Once upon a time, he was just a kid (played by Salvatore Cascio) who had a penchant for getting into trouble and bothering Alfredo (Philippe Noiret), the man tasked with running the projector at the cinema in Salvatore’s village. At first, Alfredo sees Salvatore as merely a nuisance, some obnoxious kid who refuses to listen to any of the rules he puts down. But eventually, Alfredo and Salvatore manage to form a deeper friendship, one built on how cinema can be more than just entertainment.

Films, like friendships, can have a profound impact on our lives and that potential power of filmmaking leads Salvatore to pursue a career as a projectionist into his teenage years (here he’s played by Marco Leonardi). Once Cinema Paradiso leaves the childhood portions of Salvatore’s life, there’s a discernible dip in quality in the overall film. It’s not that the film goes from being great to terrible, it’s just that the childhood friendship between Salvatore and Alfredo is such a unique interesting dynamic whereas the Salvatore teenage years follow a more conventional storyline centered on Salvatore falling in love with a girl named Elena (Agnese Nano).

Elena just isn’t all that richly defined as a character, the scenes between her and Salvatore feel very one-sided in favor of the latter character. Thus, sequences in the second-half of Cinema Paradiso dedicated to this romance (and there’s many of them) aren’t quite as emotionally compelling as they could be. On the other hand, the Salvatore/Alfredo friendship that serves as an even more prominent fixture of the movie is exquisitely realized because the script makes sure to give both of them distinct and well-defined perspectives. Such perspectives are especially manifested well by the performances, particularly Philippe Noiret as Alfredo.

Noiret can play both the gruff and loveable versions of Alfredo with equal levels of believability and the way he portrays Alfredo's growing affection for the young version of Salvatore Di Vita in a gradual manner. It's a choice in his acting that lends a shade of realism to this friendship that serves as the anchor of the entire production. Giuseppe Tornatore's direction also proves integral to Cinema Paradiso, especially the way he frames the flashback scenes to the years of Salvatore as a child in such a warm manner that effectively reinforces a sense of wistfulness. It's a cinematic way of looking through the past with rose-colored glasses that appropriately echoes how so many of us look back on our own past.

Plus, visually approaching Salvatore's past in this manner makes the present-day sequences set in the more destitute version of Salvatore's past sting all the more. A single frame in a movie will always look the same no matter what happens in the world, but the same cannot be said for reality which is always affected by the unwavering effects of time. Cinema Paradiso is very much a cinematic exercise relying on emotions, whether it's in the poignancy found in the friendship between Salvatore & Alfredo or in the bittersweet contrasts between Salvatore's youth & his adult self or in simply the reaffirmation of the emotional power of cinema. Feature films are capable of conjuring up some powerful emotions in a human being and the same can be said for Cinema Paradiso.
Posted by Douglas Laman (NerdInTheBasement) at 10:33 PM