Jumanji: The Next Level Delivers Some Laughs But Can't Quite Hit A High Score 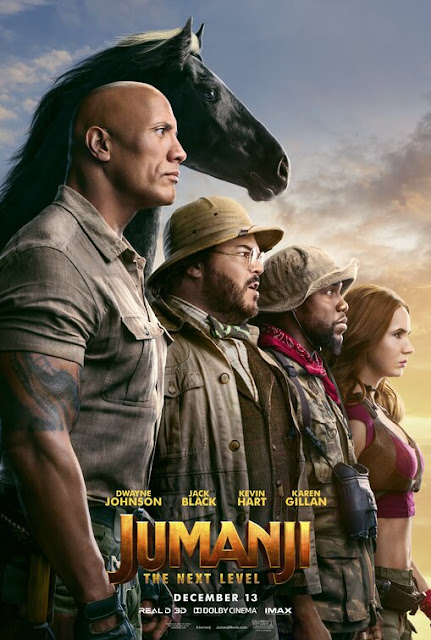 The good news with Jumanji: The Next Level is that it's hard to dislike this Jake Kasdan directorial effort. How many comedy sequels can you say that about? Unfortunately, at the same time, it's also hard to really get wrapped up in this fourth entry in the Jumanji universe (yes, Jon Favreau's Zathura is apparently canon). It's not necessarily because the production is a big mess or that a singular element has gone horribly wrong in the scripting department. It's just the gags just aren't as spry as before, the adventure stuff still feels more perfunctory than it should, enough stuff comes up just short that it begins to add up after a while.


Continuing a short time after Jumanji: Welcome to the Jungle, the four teenagers that previously got sucked into the Jumanji video game, Spencer (Alex Wolff), Martha (Morgan Turner), "Fridge" (Ser'Darius Blain) and Bethany (Maidson Iseman), have all gone their separate ways and become adults. They still keep in touch, though Spencer has become distant in recent months. The challenges of being a neurotic college student make him yearn for the time he was in a video game as a figure who looks like Dwayne Johnson. Stuck with his grandfather, Eddie Gilpin (Danny DeVito), over Winter Break, Spencer fiddles around with the Jumanji video game cartridge and ends up getting sucked back into the world of Jumanji.

Shortly thereafter, Martha, Bethany and "Fridge" all go into the game to rescue their pal, though Eddie and Eddie's former friend Milo Walker (Danny Glover) have also gotten sucked into the game. This means everyone, save for Martha, is now stuck in the bodies of different video game avatars (played by Dwayne Johnson, Kevin Hart, Karen Gillan and Jack Black) than last time. This is all a pretty lengthy set-up for a premise that ends up hinging heavily on a lot of gags about Hart (now controlled by Milo Walker) speaking slowly and Johnson (now controlled by Eddie Gilpin) reveling in his smooth-as-butter hips.

Simple comedic pleasures like those gags are the stock and trade of these two new Jumanji movies. The last movie managed to go to some nicely unexpected places with such pleasures, this go-around mostly settles for what you'd expect. That's fine whenever gags like Dwayne Johnson doing a brash Danny DeVito impression are playing out on-screen. Between his work in the Jumanji movies and his excellent turn in Pain & Gain, Johnson is turning out to be an actor who actually does his best work as an actor playing against his default on-screen persona as a macho reliable hero. Johnson's a hoot channeling the spirit of Danny DeVito, even if it is disappointing that he never offers anybody an egg for these trying times.

The other standout in the cast is Awkwafina playing a brand new video game avatar character. The Next Level turns out to be a great showcase for Awkwafina's versatility as a performer since she has to portray the personalities of two vastly different "real-world" people in her screentime. She manages to nail both of them and in the process gets some of the biggest laughs of the project. The other primary cast members are mostly amusing but are mostly just doing reheated leftover versions of their performances from the last Jumanji movie. Jack Black especially finds less success in channeling a musclebound college kid than he did in portraying a teenage girl, though he still admirably gives the role his all.

Both Jumanji movies have turned out to be old-school Hollywood affairs relying heavily on just the comedic rapport of big-name actors, a smart move since director Jake Kasdan has had plenty of successful experience with that in his prior directorial efforts, chief among them Walk Hard. Anytime Jumanji shifts into other gears, it tends to fall flatter, particularly when it comes time for action set pieces. Much of these sequences in The Next Level are just a barrage of uninvolving CGI animals chasing our lead characters across distractingly-fake landscapes. The Next Level's action scenes are mostly just a lot of noise that makes you wonder when we can get back to the smaller-scale bits of comedic acting.

The attempts at characterization in Jumanji: The Next Level are similarly lacking in consistent success. At least the assorted arcs are executed cogently, there's a clear beginning, middle and ending for them and at least this is the rare comedy sequel that doesn't jettison the female lead of its predecessor, points for that. But too often the character beats are wholly detached from the comedy/adventure antics transpiring on-screen. What do ostriches racing after our heroes have to do with their personal woes? Basically nothing. Eddie and Milo's long-standing bitterness especially comes off as too disengaged from the rest of the movie. There's a solid amount of laughs to be had in Jumanji: The Next Level but the action and character elements are undercooked enough to ensure that it can't escape the shadow of its predecessor.
Posted by Douglas Laman (NerdInTheBasement) at 2:38 PM