In Laman's Terms: The Definitive Ranking of the Six Best Star Wars Characters

Star Wars discourse is toxic. It's been that way ever since the Phantom Menace backlash caused Ahmed Best and Jake Lloyd to receive relentless bullying and the ever-growing presence of the internet in the modern era has only accelerated that level of toxicity for the modern Star Wars movies. With The Rise of Skywalker just two days from release, the Star Wars discourse is about to get revved up into overdrive and inevitably, a large sum of that is gonna be virulent. In an effort to combat that, I've decided to make a positive Star Wars essay for this weeks In Laman's Terms column. I've decided to run down six background/supporting Star Wars alien characters I adore. Basically, this is The Definitive Ranking of the Six Best Star Wars Characters!

No Han Solo to be found here, but plenty of distinctively designed aliens are ahead, starting with... 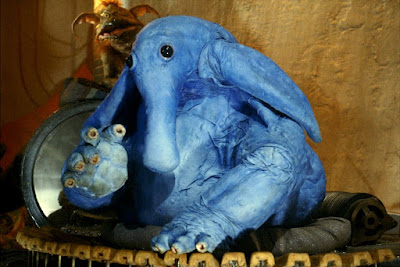 Max Rebo
There is no greater character in all of Star Wars than this blue pachyderm. That's just an objective fact. Heck, scholars have made convincing arguments that there's no greater character in the history of fiction than Max Rebo. In all seriousness, I genuinely love Max Rebo. Yes, he's goofy-looking and his design being basically just an elephant painted blue reeks of being thrown together last-minute. However, above all else, he's utterly adorable with those big black eyes and his dedication to jamming out on a space piano. Plus, you can't help but be charmed by such a cute critter hanging around all of these far more menacing looking gangsters. His screentime may be minimal but Max Rebo is so instantly loveable that he becomes the true hero of Star Wars and cinema itself. 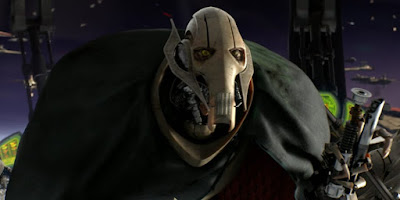 General Grievous
Is there a greater dissonance between visual appearance and actual personality in all of Star Wars than General Grievous? Even Yoda at least looked kind of wise. Grievous looks like a beast of a baddie, four arms, a face place designed to be in a permanent frown, only a trace of humanity found in those piercing yellow eyes. Yet, in Revenge of the Sith, he's a bumbling coward with a persistent cough. Dude's all show and no actual bite. Still, as a sucker for robots, the most dastardly robot in all of the Star Wars movies was already getting off on the right foot with me and when you look at Grievous in still images or as a poseable toy, he still really does look like a villain for the ages. 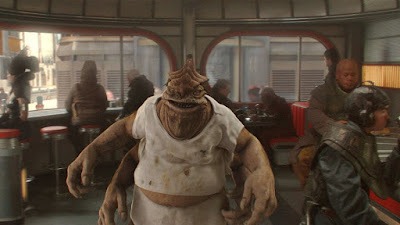 Dexter Jettster
Basically the one normal person in the entire Prequel trilogy, Dexter Jettster is an alien residing on the planet Coruscant who just wants to run his diner and sometimes meet up with his old buddy Obi-Wan Kenobi. Who can't relate to that? In a saga full of people who can move stuff with their minds and who also tend to look like models, this easygoing DadBod diner owner is a super relatable figure. Despite having four gigantic arms and being an extra-terrestrial, Dexter Jettster is somebody who could have stepped out of our world. He only gets one scene in Attack of the Clones but that's enough to cement Dexter Jettster as one of the most human organisms in all of Star Wars. 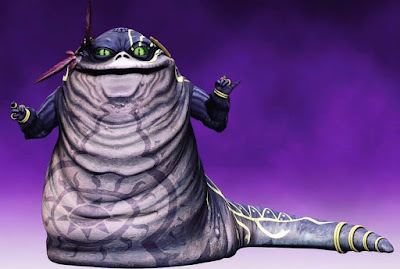 Zirro the Hutt
One of the strangest creative decisions made in the Prequel Trilogy was having alien characters being suddenly capable of speaking English. Previously, Star Wars aliens spoke their own language but now, everybody in the galaxy had a hand at English save for Poggle the Lesser. This puzzling move did at least give us Zirro the Hutt, Jabba's Uncle who doesn't just speak English, he speaks like Truman Capote. What an utterly bizarre creation, I can't even begin to imagine what possessed this idea to be conjured up in the first place. Corey Burton's gusto vocal performance goes a long way to making this character at least an over-the-top treat to watch in his few Clone Wars guest appearances. Plus, looking back on initial responses to the 2008 Clone Wars movie (which Zirro appeared in), it looks like the presence of a character this explicitly coded as queer angered a lot of jackasses on the internet, gotta give points for that. 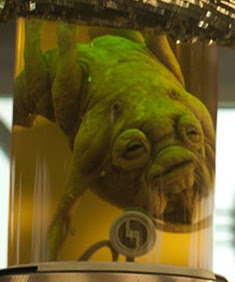 Luleo Primoc
Briefly appearing on Dryden Vos' party barge, Luleo Primoc is a nightclub singer that basically just looks like one of those heads in a jar that showed up frequently on Futurama. A head in a jar singing nightclub tunes is just the kind of weirdness I can party with and the fact that he's named after Louis Prima makes him even better. Like the best blink-and-miss-them background Star Wars characters, your imagination reels about the possible backstory for this strange-looking creature. How did he get in the jar? Maybe he was always in the jar? What would a music biopic about his life look like? Star Wars is all about the unspoken possibilities and the distinct design of Luleo Primoc certainly inspires your brain to think about those.

Cad Bane
Remember that time a children's program introduced a new baddie by having him shoot an unarmed man in the back without even looking? Murder, just what I expect to see airing on Cartoon Network right after Chowder. Cad Bane has got the bad-assery to make sure he isn't just a dynamite look, though, to be fair, his look is pretty stellar with that big old hat, leather jacket, two tubes running into his head and those pools of red serving as his eyes. Cad Bane is basically what would happen if Sergio Leone got to design a Star Wars alien and his numerous Clone Wars appearances were always a joy. Him being the rare animated kids TV character who actually got to dish out lethal behavior made you genuinely unsure of what grisliness he was capable of and boy was that entertaining. I'm usually against fan-servicey cameos, but I'm totally down if J.J. Abrams wants to slip me some Cad Bane into Rise of the Skywalker. Ditto for Max Rebo.
Posted by Douglas Laman (NerdInTheBasement) at 8:00 AM