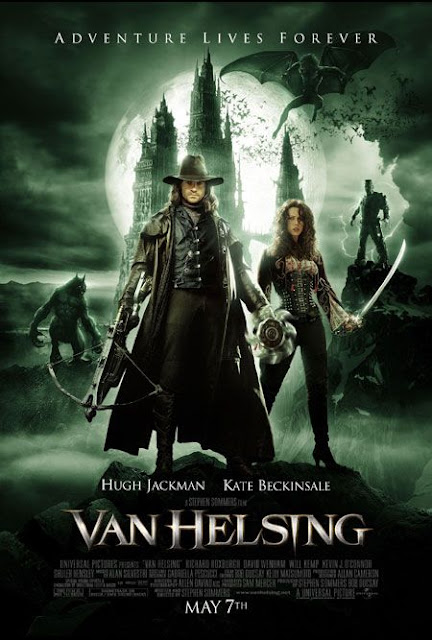 Don't you hate it when a movie has an excellent opening scene and then everything that comes after it is just crummy? It's like chowing down on a delectable appetizer prior to being served rotten meat as your proper meal, the already substandard main course gets its awfulness hammered home by coming hot off the heels of the delicious appetizer you just scarfed down. That's what happens with Van Helsing, which opens with a black-and-white sequence that feels like Universal Monsters Fan-Fiction come to life as Dracula (Richard Roxburgh) plots to use a new monstrous creation of Victor Frankenstein for his own wicked devices, a plan that Frankenstein's Monster (Shuler Hensley) does not particularly care for. This results in the monster grabbing the corpse of his now deceased "father" and running to a windmill that is promptly set on fire, resulting in the apparent death of the creature much to Dracula's anger.


It's all a bunch of monster movie nonsense dialed up to 11, particularly in terms of grandiose performances that include Kevin J. O'Connor as an Igor whose voice makes him sound exactly like Nick Kroll. There's nowhere to go but down after that as the plot proper starts, which involves the titular character Van Helsing (Hugh Jackman) going about his job of hunting down monsters for a secret organization. He has been tasked to track down Anna Valerious (Kate Beckinsale), who might just be able to lead him to the infamous Dracula, who is terrorizing the village Anna calls home with an assortment of monsters like The Wolfman and a trio of vampire ladies.

If that all sounds like a recipe for some trashy horror/action fun, it probably would be if it was all packed into a concise 90-minute thriller ride, but Van Helsing, for some ungodly reason, lurches onward for over 130 minutes and is packed with far too many subplots that go nowhere. Anna and her relationship with her brother, for instance, ends up being meaningless to the plot while Van Helsing's yearning for discovering his past, seemingly his key character trait, sputters out and gets no satisfying resolution. Van Helsing feels like a precursor to the bloated Pirates of the Caribbean sequels in terms of its needlessly complex nature that ends up detracting from any kind of fun it could have given the audience.

The convoluted nature of Van Helsing is especially puzzling when one considers how it's clearly being done to capitalize on the success of The Mummy and The Mummy Returns, to the point that the filmmaker behind those two features, Stephen Sommers, is in the director's chair on Van Helsing. That original 1999 Mummy film was so much fun because of its straightforward nature though, it just let some fun thrills and two charming as hell lead performances carry the project, resulting in a totally charming blockbuster. Van Helsing, meanwhile, becomes too enamored with just piling on extraneous narrative details and hollow spectacle, and when those are your two key ingredients for your movie, it's no wonder the results are something as lackluster as Van Helsing.

Perhaps most tragic of all in this mess of a movie is that Hugh Jackman and Kate Beckinsale get totally wasted in the lead roles. Jackman provides one of his most forgettable leading man performances in a movie that refuses to give him any chance to be charming, instead just making Van Helsing an inert individual without any distinctive traits to his name. What a bore of a protagonist. Poor Beckinsale fares even worse in a disposable love interest role while the supporting cast is similarly forgettable, though Shuler Hensley is actually solid in a far too small role as Frankenstein's Monster, I like how he combines an intimidating physical presence with the characters intellectual tendencies in terms of personality and dialogue.

Some aspects of the movies take on the Universal Monsters are the only real area where Van Helsing manages to excel. In addition to a decent interpretation of Frankenstein's Monster (though that's more on Hensley's performance than anything else), the visual decision to make werewolf to human transformations akin to a snake shedding its skin is a cool and unique idea. Unfortunately, too many of the other monsters, including some CGI offspring of Dracula that look like they wandered off from the planet Geonosis, aren't all that creative or interesting in their designs and the fact that so many of them are rendered in CGI graphics that were out of date back when it was originally released in 2004 further detracts from any tension these beasties are supposed to bring. This means you won't be on the edge of your seat when the lead hero of Van Helsing fights monsters, hell, I'd be surprised if you don't start dozing off. But hey, to the movies credit, at least it's better than last year's The Mummy debacle.
Posted by Douglas Laman (NerdInTheBasement) at 11:14 AM