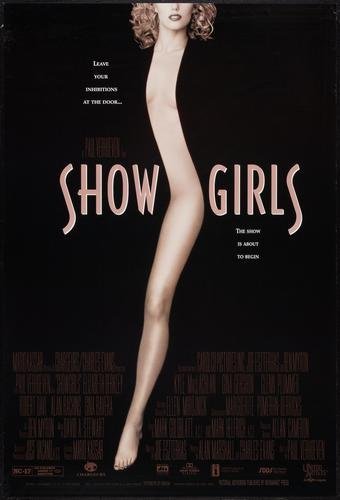 Content Warning: Discussions of sex (it's a review of the most high-profile NC-17 movie of all-time, what did you expect?) and sexual assault ahead.

What Ishtar was to the 1980's, Showgirls was to the 1990's, a unique high-profile movie that generated all kinds of scorn and became known as an all-time entry in the halls of bad cinema. But just like Ishtar, Showgirls has been given a hefty critical re-evaluation in recent years, with praise of the film being widespread enough for the project to warrant a theatrical screening at the Museum of the Moving Image in New York City on Sunday, June 24, 2018 that I was lucky enough to attend. What better way to watch Paul Verhoeven's incredibly divisive motion picture for the first time than on a 35mm print projected on the big screen? Even if the film was terrible, the experience itself was too good to pass up!

Luckily, Showgirls ended up being far from terrible, on the contrary, it's an incredibly bold piece of satirical cinema that plants its flag firmly on the surface of Planet Audacious from frame one and never even thinks of plucking that flag out of the ground. Verhoeven has done satire all throughout his directorial career, but never this flashy and never this stylized. The most gloriously unhinged moments of Showgirls satirical take on how men objectify and treat women are so stylized that they end up making the ultra-violent satirical mayhem of RoboCop look like a down-to-Earth Noah Baumbach movie.

The story of Nomi Mallone (Elizabeth Berkley), who hails from "different places", begins with dreams and ends in a nightmare, as so many tales about small-town girls with aspirations of becoming a big star do. Mallone resides in Las Vegas and in order to make ends meet, she strips at The Cheetah, a club whose patrons, one fateful night, include famous dancer Cristal Connors (Gina Gershon) and her husband Zack Carey (Kyle MacLachlan). These two are the masterminds behind the hottest show in Vegas and Mallone ends up getting hired to perform in it. While there, she and Connors develop a rivalry that spurs Mallone's hunger for the spotlight, a hunger that will permanently alter her already troubled life.

Screenwriter Joe Eszterhas takes this basic outline for a movie and proceeds to expand that outline in a manner that ensures that everybody in the universe of Showgirls is dialed up to 11 in terms of kooky they are. There are no subtle people in this movie, they're all dropping profane pieces of dialogue and reveling in their over-the-top personalities. Is that an unorthodox choice? It sure is but it fits the world Showgirls inhabits, the world of Las Vegas entertainment. Very little about the real world of Las Vegas entertainment is subdued, why should a movie that's entirely about a newcomer trying to rise to the top of that world be any different? Not every instance of zaniness in Showgirls works, goodness no, but there is a purpose for why everything's so stylized.

Or, perhaps, I should say purposes, since the other reason everything is so over-the-top in Showgirls is so that it can get a point across about the absurd ways men treat and objectify women. Similar to how I, Tonya used a heightened tone to explore the ways real-life abuse can manifest in stylized ways, Showgirls wants to use its own unique farcical aesthetic to hammer home how the predominately unhinged dialogue the characters are engaging in about female characters isn't all that different from the conventional way men tend to talk about women. Is a line from Showgirls like "Must be nice not having someone come on you." really all that much more nuts than what the sitting President of The United States self-describes as "locker room talk"? Maybe in the context of a movie such lines sound strange but they're disturbingly similar to real-life pieces of dialogue men tend to use about or towards women. Showgirls is holding up a funhouse mirror to real-life ways women are treated and ends up creating an all too accurate reflection in the process.

By making everything so off-the-wall nuts, Showgirls is echoing the preposterous ways women are treated or objectified in America. In addition to being thematically rich, the memorably ludicrous dialogue is also just a lot of fun to watch get delivered by the actors, with sequences like a conversation about eating dog food going on so much longer than I could have expected, but the way said exchange is delivered by the actors makes it a total joy to watch unfold. The cast seems to have just decided to toss themselves head-first into the madness of Showgirls and never look back and that's especially true for the film's leading lady. There isn't a ketchup bottle Elizabeth Berkley won't toss aside or a line of dialogue she won't deliver with off-the-charts ferocity in her (successful, I might add) quest to deliver an unforgettable bravura performance. Kyle MacLachlan, no stranger to entertaining hammy roles himself, is quite fun in the male lead while Gina Gershon is a total delight as a rival/potential love interest for our protagonist. Gershon sinks her teeth into all the zany dialogue she's given and the result is something that can stand toe-to-toe with Berkley's work here in terms of exquisitely entertaining unhinged acting that fits right in with the tone of the script.

Said script does manage to make the colossal misstep of incorporating a sequence depicting Mallone's best friend, Molly (Gina Ravera) being raped at a party, a turn of events Showgirls really doesn't feel prepared to deal with properly. Such a gruesome event ends up just being used as a way to motivate the lead character into action for the third act and even worse, Mallone's violent revenge on the man behind the rape is kept mostly off-screen while the camera had previously lingered on Molly being raped, a gender double-standard in terms of whose anguish gets depicted that feels like a betrayal of Showgirls attempt to use a stylized tone to shed light on how dehumanizing culturally accepted  ways of treating and objecting women are.

It's a majorly thoughtless plot turn that ends up severely cutting down on the previously entertaining atmosphere of the rest of Showgirls, though some fun scenes (namely the final goodbye between Gine Gershon and Elizabeth Berkley's characters) do manage to emerge before the credits roll. Such a narrative blunder ends up being the biggest foible on a movie that's usually able to turn scenes or pieces of dialogue that don't work as well as they should into entertaining bits of comedy. Despite it garnering such a toxic reputation back in 1995, I, as a 2018 viewer watching it for the first time, would say Showgirls works far more often than it doesn't and overall registers as another sharp piece of entertaining satire about American society from director Paul Verhoeven. Showgirls is a one-of-a-kind movie with all kinds of oddball touches to it (do I need to go through that iconic dog food scene again?), but we all know about how weird it can be. Let's also start recognizing how smart this movie is and the clever reason for why it's utilizing such a stylized tone in the first place.
Posted by Douglas Laman (NerdInTheBasement) at 5:32 PM