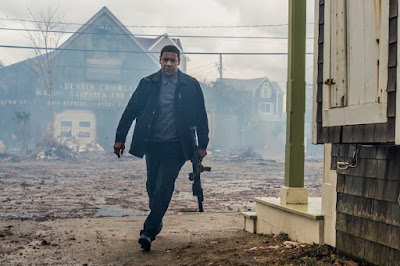 It's getting increasingly rare to find an instance at the domestic box office where the film everyone predicts will rule the box office over any given weekend doesn't inevitably win that weekend, mainly because such films are usually massive blockbusters that tower over the competition. But in the duel between two mid-budget sequels, The Equalizer 2 took a surprising lead over Mamma Mia: Here We Go Again, the latter being the film everyone, myself included thought would rule the weekend. But it was The Equalizer 2 that managed to top the frame as the action film managed an impressive $35.8 million, up 5% from the $34.1 million bow of the first Equalizer and the third best opening weekend ever for Denzel Washington.


When the summer of 2018 began, I thought The Equalizer 2 would end up doing only OK business simply because it had been four years since the first Equalizer and I didn't think that 2014 action film had left much of an impact on viewers. I'm eating crow now for sure as Sony/Columbia smartly marketed The Equalizer 2 as a Denzel Washington vehicle first and foremost, a brilliant idea because audiences generally love Washington in anything but they especially love him in action thrillers like this one. The fact that we haven't had a high-profile R-rated action movie in months also allowed The Equalizer 2 to fill a void in the marketplace. If The Equalizer 2 can hold on through August, there's a good chance it ends up becoming only the sixth movie ever for Denzel Washington to crack $100 million domestically. Looks like Denzel Washington's first ever sequel is an out-and-out hit.

Don't feel too bad for Mamma Mia: Here We Go Again though, as the musical managed to fare just fine over the weekend with a great $34.3 million bow. That's a 25% improvement over the first movies opening weekend and the fourth biggest opening weekend ever for a musical. Ten years may have passed since the first Mamma Mia!, but the film has remained well-regarded by audiences in that time and just as Equalizer 2 excelled due to the lack of R-rated action movies in the marketplace, the lack of similar musical fare in the summer 2018 landscape allowed this new Mamma Mia! adventure to thrive.

Hotel Transylvania 3: Summer Vacation had a sharper second-weekend decline than past Hotel Transylvania films as it dropped 47%, but the other two entries in the franchise opened in September, meaning it's likely this is more due to kids being able to see the film during the week, thus reducing the necessity of weekend showings, rather than word-of-mouth. Grossing another $23.1 million, the newest Hotel Transylvania movie has grossed $91 million so far. Fellow July 2018 holdover Ant-Man and the Wasp grossed another $16.1 million this weekend, a 44% third-weekend drop, a better third-weekend drop than last year's early July 2018 MCU movie Spider-Man: Homecoming. The newest Ant-Man adventure has grossed $164.6 million after 17 days of release.

BH Tilt released Unfriended: Dark Web this weekend to middling results as the horror sequel grossed $3.4 million, a massive drop from the $15 million bow of the first Unfriended. Equalizer 2 and Mamma Mia 2 didn't seem to suffer from a long amount of time between installments, but it does feel like Unfriended did get damaged from having such a prolonged amount of time between the first and second movie. This is the fifth biggest opening weekend ever for BH Tilt and the first time the studio has released a follow-up to a film released from Blumhouse Productions by Universal Pictures.

The top 12 movies this weekend grossed $157.7 million, down about 11% from this same weekend last year when Dunkirk began its impressive domestic box office run.
Posted by Douglas Laman (NerdInTheBasement) at 10:39 AM