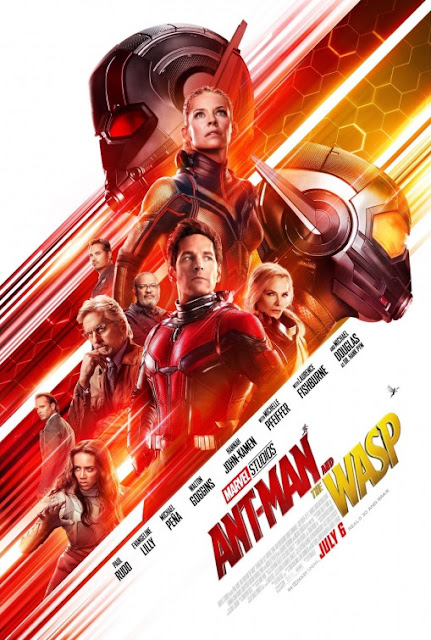 As the great mid-20th century philosopher The Cat In The Hat once proclaimed "It is fun to have fun, but you have to know how." That's oh so true under any circumstance, but it's especially relevant when talking about making movies that are supposed to be just light-hearted fun. If you make these kinds of films well, they can be oh so enjoyable, but if you make them in a rushed or otherwise subpar manner, you end up with something empty that's grating rather than entertaining. Just compare the best Will Ferrell comedy vehicle like The Other Guys to his worst comedy vehicle like Daddy's Home, both movies are aiming to be entertaining yukfests, but one shows craftsmanship in creating its comedy, whereas the other is a lazily constructed cash-grab that just bores rather than delights you. Both are aiming for fun, but only the one that's actually well-made hits that target.


Ant-Man and the Wasp, the 20th movie in the Marvel Cinematic Universe, is a great example of how to execute a zippy fleet-footed comedy right, with director Peyton Reed and a gaggle of writers (one of which is the film's star, Paul Rudd) teaming up to bring a small-scale (no pun intended) adventure that's heavy on the weirdness and laughs. Following up on the events of both Ant-Man and that superheroes participation in Captain America: Civil War, Scott Lang (Paul Rudd). the alter-ego of Ant-Man, is under a two-year-long house arrest that's kept him separated from the outside world and his former mentors Hank Pym (Michael Douglas) and Hope Van Dyne (Evangeline Lilly).

But now Pym and Van Dyne need Lang's help since he's got some information that could be the key to helping save Hope's mother and Hank's wife, Janet Van Dyne (Michelle Pfeiffer) from being trapped in an alternate dimensional space known as The Quantum Realm. Now Scott Lang is being dragged along on an adventure that will see the trio try to evade FBI agents looking to bust Lang for skipping on house arrest, a Southern arms dealer played by Walton Goggins and an adversary known as Ghost (Hannah John-Kamen) who is eyeballing Hank Pym's technology for her own purposes. Whereas other superhero movies may put the fate of the world at jeopardy, here, the stakes are extremely low-key and that's one of Ant-Man and the Wasp's greatest charms, it keeps things more intimate and character-focused rather than going for spectacle just for the heck of it.

Instead of resembling what one might consider a conventional 21st-century superhero movie, the way the plot of Ant-Man and the Wasp unfolds frequently reminded me of a silent movie comedy that Harold Lloyd and Charlie Chaplin could have starred in that the story is heavily driven by comedic screw-up's and the characters trying to recover from said screw-up's that have consequences rippling throughout the story. The sight of beautifully executed awkward physical comedy was a riot to watch in 1918 and a century later it's lovely to see Ant-Man and the Wasp utilize that type of comedy so well, particularly in any scene where Ant-Man's device that makes him switch sizes malfunctions (one sequence set in elementary school is especially a keeper simply thanks to Paul Rudd's body language).

There's all kinds of fun visual humor to be had throughout Ant-Man and the Wasp, especially in any appearance by heavily enlarged ants, but there's also laughs to be had in the dialogue exchanges between the cast, with Michael Douglas especially getting some of the best jokes as a foil against all of the wackiness happening around him. It isn't just Douglas that shines here though as the cast for this motion picture does some really great work, with Rudd and Lilly (the latter actor actually getting to play a character this time around compared to her role in the first Ant-Man) serving as entertaining leads, Hannah John-Kamen making for a fascinating baddie in her riveting performance while Michael Pena once again steals the show with his constantly delightful antics. Bonus points too for allowing Walton Goggins to go full-on Southern Gentleman in his role as a wicked arms dealer, that's a persona Goggins always plays so deliciously well and he's a total winner here.

The script, written by Rudd and the screenwriting duo's of Chris McKenna & Erik Sommers and Andrew Barrer & Gabriel Ferrari, provides plenty of chances for this cast to shine while also showing some ingenuity in, among other areas, how it handles its villains. One of the best aspects of the first Ant-Man was how rival stepdad Jim Paxton (Bobby Cannavale) turned out to actually be a nice & caring guy, a nuanced way of looking at potential adversaries that's carried over in how this particular screenplay approaches its own set of foes.  That's the kind of thoughtful detail that makes the fun of this movie so enjoyable, there's clearly thought going into how characters can evolve over the course of the story as well as how individual character dynamics should function and putting that kind of consideration into the story helps make the overall movie that much stronger.

Aside from some clunky plot beats (there's one point where Scott, Hope and Hank have abruptly managed to escape a villain's clutches that had me briefly confused), the script's a well-done piece of work that director Peyton Reed brings to life with real imagination and flair. Reed seems to be having a blast with all the visual opportunities offered up the unique power-set of the main superhero duo of this feature and that results in Ant-Man and the Wasp having some thrilling realized sequences involving shrinking, growing and fighting evildoers. Some real care and thought has gone into how to bring the delightfully madcap world of Ant-Man and the Wasp to life and the result is a movie so thoroughly entertaining and fun that it would make The Cat In The Hat proud.
Posted by Douglas Laman (NerdInTheBasement) at 10:25 AM