Giddy On Up With Andrew Haigh's Emotional Rollercoaster Lean on Pete 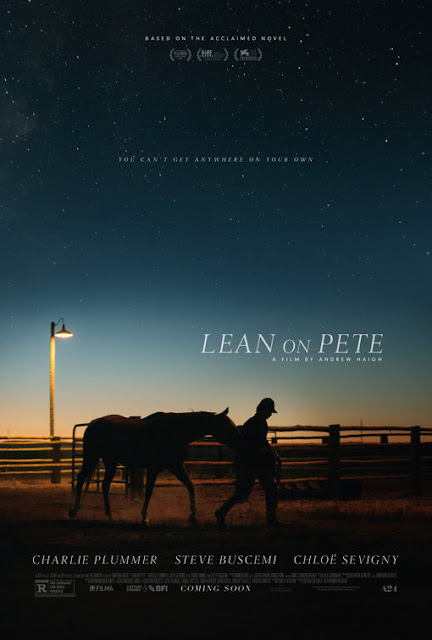 Assistant editor turned director Andrew Haigh has quickly become well-known for working on films that carry a harrowing emotional quality to them, whether it's 45 Years or Weekend or Shanghai Knights. His newest directorial effort, Lean on Pete, carries on this tradition by telling the story of Charley Thompson (Charlie Plummer), a 15-year-old kid who lives with his single father, Ray (Travis Fimmel), in a trailer home in Portland, Oregon. Charley's life is one filled with struggles as his dad, who's still emotionally recovering from Charley's mom walking out on the both of them years prior, barely makes ends meet financially, spurring Charley to make some money at the local racetrack doing odd jobs for Del Montgomery (Steve Buscemi).


There's a version of Lean on Pete where Del Montgomery ends up becoming a father figure and a mentor to Charley, one who divulges little life lessons at every turn, but this is not the version of that story. Instead, Montgomery is a man who has basically given up, he goes through his day-to-day routine with little in the way of palpable life, let alone enthusiasm. The bleak way in which this character is rendered matches the world around Charley, Lean on Pete's depiction of portions of Portland, Oregon is that of a quietly devastating place where people have resigned themselves to whatever lowly hand life has dealt them. It's a morose location that, combined with his own personal life, has left Charley as a quiet shell of his former self.

Charley finds some happiness in the presence of a racehorse named Lean on Pete. Montgomery thinks very little of the creature but despite the advice of jockey Bonnie (Chloe Sevigny), Charley develops a bond with Lean on Pete, offering him some form of companionship in a life devoid of connecting with other individuals. There are all kinds of dramas about young people managing to connect with their Equus pals, but Lean on Pete opts to take such a well-worn story in a bleaker direction as it delves into the kind of pain Charley is grappling with as a result of constantly losing people close to him, thus offering an explanation for why the bond he's developed with this horse is so incredibly important to him.

The fact that Haigh's script chooses to render Charley's surroundings in such a realistic manner helps makes the characters withdrawn nature easy to understand. The denizens and even the look of the buildings found in the town Charley calls home have a closed-up nature to them, adding further hardships to a young man looking for some form of human connection in a domain that seems to live by the creed of "I'm looking out for number one". At the same time, Haigh doesn't go over-the-top in this direction, allowing nuance to emerge in small touches like Montgomery making sure to pay Charley extra on their first day of working together or in the fact that the strained relationship between Charley and his dad comes from Ray being more distant from his son than anything else.

Letting the audience see these nuanced facets of the people in Charley's life allow the world of Lean on Pete to feel ripped straight out of reality and the same level of compelling realism can be found in the character of Charley himself who is brought to life by Charlie Plummer. This movie is heavily concentrated on the character of Charley that it's no exaggeration that the film was gonna live or die based on the performance given by Plummer, and luckily, he does fantastic work in this role. Plummer realizes the withdrawn nature of Charley beautifully especially in a scene where Montgomery, over lunch, finds getting answers about Charley's personal life from Charley himself to be as difficult as pulling teeth.

It's a scene that owes so much of its effectiveness to how Plummer conveys the characters subtle unwillingness to delve too deep into his personal life. Of course, Plummer's ability to make Charley's taciturn tendencies so believable also make the few times the character overtly expresses his anguish heartbreaking to watch, Plummer knows just how to make these rare instances of outward expression feel like an emotional dam bursting and it's harrowing to watch. That's far from the only time Lean on Pete manages to rivet the viewer with its powerful sense of aching pathos, of course, and Andrew Haigh does a commendable job of creating a motion picture all about one young man's everyday torment that feels so thoughtful rather than exploitative.
Posted by Douglas Laman (NerdInTheBasement) at 12:24 PM