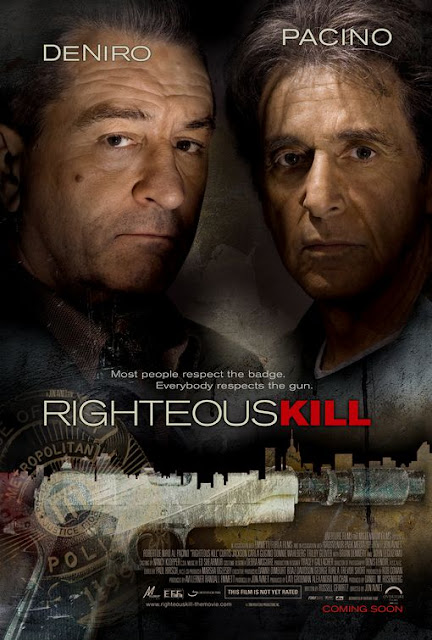 Let's not beat around the bush here, in the 21st century, Robert De Niro and Al Pacino have both been known to star in some crummy movies. That can be mostly chalked up to how, when you work as an actor consistently for over four decades, you're bound to show up in some dud movies, that's just the law of averages at work, but it can also be attributed to how both Pacino and especially De Niro have taken a lot of roles in subpar movies looking to either lampoon or ride the coattails of the duo's groundbreaking work in the 1970s, work so exquisite that even a billion movies as bad as Righteous Kill couldn't dilute their quality, though this 2008 disaster that unites Pacino and De Niro certainly tries its hardest to do just that.

There are two detectives who star in Righteous Kill, one of them is Tom Cowan (Robert De Niro) and the other is David Fisk (Al Pacino) and they've been working together for ages now, they're as thick as thieves and then some. Cowan has recently become disillusioned with how many of the criminals they help arrest end up going free on technicalities and at the exact same time this frustration develops, someone begins murdering the various criminals Cowan and Fisk tried to bring to justice. Could Cowan have been the guy to commit these killings? Well, we get various videos of Cowan talking about how he committed these murders throughout the film and everyone suspects him basically from the get-go, so if that all sounds a little too tidy in terms of pinpointing who is behind the slayings, congrats, you're smarter than the professional highly-paid detectives in this movie.

Righteous Kill is such a clumsily structured movie that it's hard to even describe what it's doing for most of its runtime. It's all just an extended preamble for a twist ending that even I was able to figure out in the first five minutes, and I'm uniformly terrible at figuring out potential twist endings in movies (at the age of 13, I was totally blindsided by the big twist in G.I. Joe: Rise of Cobra). Before we get to the big "gotcha!" moment, the script mostly just jogs in place as various supporting characters try to figure out how they can prove Cowan is behind the murders while much of the drama hinges on the relationship between Cowan and Fisk that we haven't been given a reason to care about.

Part of the reason these two are never believable as a pair of long-time best buddies is that the script by Russell Gewirtz suffers from a severe case of telling instead of showing, with Fisk and Cowan constantly talking about how much they value each other as friends but such a sentiment is never conveyed in their on-screen actions or even in their rapport together. While I'm sure some marketing executive's pupils turned into dollar signs at the thought of pairing Michael Corleone with the acting legend who played the younger version of his father, such a pairing can't salvage the dreadfully written dynamic between the two leads that's only further hindered by the lethargic performances given by both De Niro and Pacino.

It isn't just in the lead duo's relationship that Gewirtz's script fails to rise to competency, though, the whole movie is just terribly written, with a sloppy story that's already muddled and hard to follow even before one takes into account all the wonky editing that frequently makes it hard to figure out what happening and where in the story. Worst of all in the writing might just have to be the dialogue, which, between Al Pacino going on a monologue about how Underdog influenced kids to be pill-poppers and a prisoner responding to questioning by delivering a profane rhyme, feels like it wants to mimic the vulgar pop culture savvy rhythms of how Quentin Tarantino characters speak but misses the mark completely.

Any of the wit or cleverness found in the best of Tarantino's writing is entirely absent here with all kinds of ham-fisted and ridiculous dialogue played entirely too straight-faced (there's a scene where De Niro constantly louds and anrgliy insists to his fellow detectives he's not the murderer at the gym, the perfect move for someone who's totally innocent) showing up instead. All of it's filtered through unimaginative directing and cinematography that make Righteous Kill look like any other number of other 2000's crime thrillers you've seen, though I doubt there's a whole lot of those 2000's crime thrillers that could attest to being as awful as Righteous Kill.
Posted by Douglas Laman (NerdInTheBasement) at 7:21 PM