With In Bruges, Director Martin McDonagh Made A Phenomenal Foul-Mouth First Foray Into Helming Feature Films 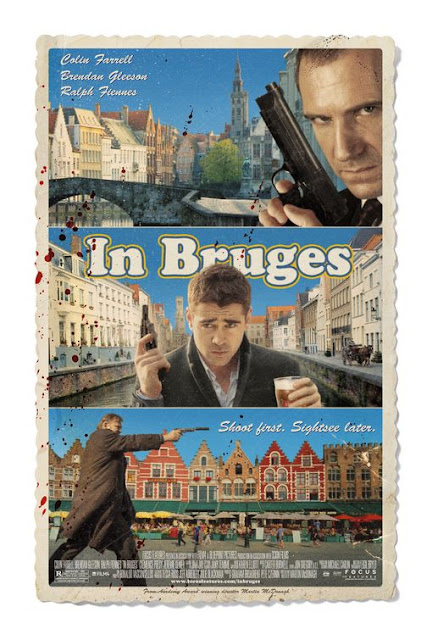 SPOILERS FOR IN BRUGES AHEAD

Something I just discovered about director Martin McDonagh, the man behind Three Billboards Outside Ebbing, Missouri and Seven Psychopaths, is that he's been primarily a man of theatre in his writing/directing career. He did about a decade of consistent work in the world of plays that was showered with acclaim and Tony award nominations before deciding to direct his first feature film, 2008's In Bruges. Directing motion pictures may have been unfamiliar terrain for McDonagh, but the process of directing, in general, was not and his experience with directing plays likely informed the assured hand that guides the one-of-a-kind nature of In Bruges to such exceptional success.


Like all but a rare few characters in McDonagh's movies, the lead character of In Bruges is a foul-mouthed selfish person, with the character in question being hitman Ray (Colin Farrell), who's been sent for an extended vacation with fellow hitman Ken Daley (Brendan Gleeson) after Ray was responsible for an assignment gone wrong. The two are staying in Bruges, a Belgium city that immediately earns the ire of the perpetually irritated Ray. During the two's stay in Bruges, Ray finds himself attracted to a lady who's acting in a local film production while Daley awaits orders from their boss, Harry Waters (Ralph Fiennes), which turn out to be Waters asking Daley to kill Ray.

Ray and Daley's stay in Bruges has them running into all kinds of seedy low-life's who speak primarily in profane ways. As said above, these are the kind of characters that serve as the default in McDonagh's films, with the likes of Ken Daley, a more soft-spoken and kindhearted man, being the exception rather than the rule. While the characters in his work may be as boorish as a heavily intoxicated Shrek, McDonagh's movies, and this is especially true of In Bruges, aren't really sadistic exercises in hopelessness. McDonagh is fascinated by bad people and examining what drives them, what makes them tick and is there any hope for a complex road to something remotely resembling redemption to be found in these people?

The dialogue and characters may be loutish but the Martin McDonagh penned stories they inhabit tend to be more about challenging such behavior rather than reveling in it. In Bruges, being the very first feature film of his kicks off this thematic throughline in McDonagh's movies by centering the story on Ray, a guy who never met a human being who couldn't hurl a crude insult at. Ray is just overflowing with hate at anyone that comes near him, but he's also wrestling with the fact that he just accidentally killed a child, a gruesome action that's driving him to almost commit suicide.  McDonagh isn't excusing Ray's vulgar behavior, but he is clearly wondering if these flashes of remorse signal hope that Ray can improve himself as a person, with the arguments for and against this idea being personified by the characters of Ken Daley and Harry Waters, respectively.

The debate on whether Ray is even capable of some kind of reformation is brought to fascinating life in McDonagh's script, which doesn't find itself succeeding when grappling with this specific debate. The characters in this screenplay are so vividly realized thanks to both McDonagh's sharply written dialogue and the various work by the actors in the cast that bring these striking individuals to life with appropriately scintillating performances. Watching Collin Farrell and Brendan Gleeson as these characters engage in humorous back-and-forth dialogue exchanges is pure distilled fun on its own, and best of all, such exchanges subtly get you wrapped up in the characters themselves, making the larger questions the story wants to probe about redemption all the more absorbing to watch unfold.

And when I say Farrell and Gleeson are fun in this movie, boy do I mean it, this has to be one of Farrell's best roles as an actor. Farrell seems to just come alive when you hand him an offbeat complicated part to play (just look at the excellent performances he gave in the last two Yorgos Lanthimos movies) and playing the vulgar with a capital V role of Ray is one he just shines as brightly as the Texas sun in the summertime in. Gleeson makes for a wonderful foil for Farrell as well as providing numerous beautiful moments of acting that excellently convey his characters more world-weary self. And as for Ralph Fiennes as the film's antagonist, well, it's a riot to watch Fiennes in this part, Fiennes sells his character's determination to give a composed business-like composure to the gruesome violent actions he commits beautifully, it's a wonderful performance.

McDonagh gets some great work out of these trio of actors who handle the thoughtful and profane nature of this movie wonderfully.  McDonagh also shows real skill in properly handling those two elements in his writing and direction, which is how scenes like the film's quiet open-ended conclusion are able to work as powerfully as they do (though Colin Farrell's voice-over work in that ending is also a crucial reason why it's such an effective capper to the proceedings). Martin McDonagh may have been a man of the stage rather than the screen prior to 2008, but with In Bruges, he made a top-notch inaugural foray into filmmaking that not only set the stage for what kind of heady themes he'd be exploring as a feature film director, but also delivered so much craftsmanship and well-realized thoughtfulness that, well, In Bruges ended up being great enough to feel like something out of a fairy tale, y'know?
Posted by Douglas Laman (NerdInTheBasement) at 2:00 PM