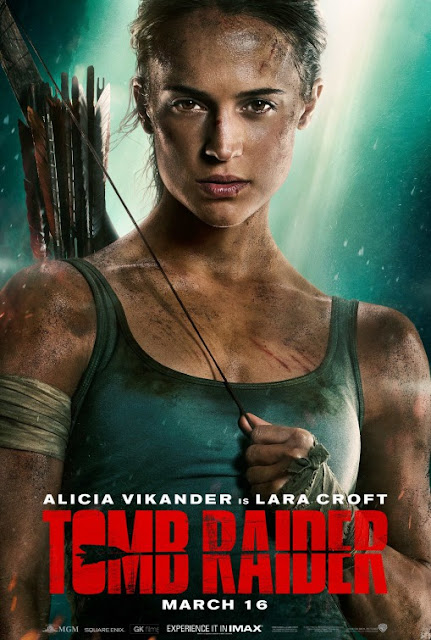 It's been 15 years since the last time Lara Croft got a movie adaptation, so it's about high time for a reboot according to Hollywood studio executives. After all, we got a Hitman reboot just eight years after the first time they tried to turn that video game into a movie, so MGM/Warner Bros/GK Films have been practically dragging their feet at getting this character back onto the silver screen. Alicia Vikander is now playing the role once inhabited by Angelina Jolie and the resulting quality of this new film, called Tomb Raider, is noticeably better than the original Lara Croft: Tomb Raider film from 2001, though that's probably the highest piece of praise I can offer it.

Tomb Raider serves as an origin story for the famous Lara Croft as she grapples with refusing to accept the demise of her late father, Richard Croft (Dominic West). Upon discovering a trinket left to her by her dad, Lara Croft discovers that her father was searching for a special island that was home to an entombed queen, one that evil forces will stop at nothing to get. With the help of boat captain Lu Ren (Daniel Wu), Lara Croft heads off to find the island, only to find that the nefarious Mathias Vogel (Walton Goggins) is already there and is here to carry out dastardly plans for all the secrets this island contains.

The story of Tomb Raider isn't, conceptually, all that bad, but the screenplay, penned by Geneva Robertson-Dworet and Alastair Siddons, suffers greatly from a lack of personality, with director Roar Uthaug similarly lacking all that much in the way of distinctive qualities in his direction. Much of this comes from the decision to play Tomb Raider as a (sigh) grim n' gritty realistic film like it was 2006 again and Batman Begins was the only movie you could imitate if you wanted to be a box office smash hit. This means anything too wacky or fun has been eschewed, with the climax itself humorously bending over backward to justify the inclusion of what basically amounts to zombies into the proceedings.

This adherence to uber-realism leaves a lot of the action sequences floundering as simply either generic shoot-em-ups or booby trap sequences set in ancient ruins that could have come out of any of the Brendan Fraser Mummy movies. Eschewing any sense of fun gets especially egregious when it means poor Walton Goggins is left woefully miscast in a role that doesn't allow the actor to use his gift for entertaining scenery chewing even once! If you have Goggins around as a bad guy and he's not just delightfully fun every time he's on-screen, well, that's just a whole other level of screwing up on par with making inedible chocolate chip pancakes.

The tediously dreary nature of this adventure wastes a game performance from Alicia Vikander whose take on the famous Lara Croft character is easily the best thing about the entire movie. Vikander provides a level of admirable realism in her more dramatic sequences while making good use of her characters wits and relative inexperience with extensive hand-to-hand combat in the action sequences, it's a darn good performance that deserved a better movie. Daniel Wu is also solid in a supporting role as a boozy ship captain that, unfortunately, leaves Wu with nothing to do once the generic as hell third act gets going.

Performances from Alicia Vikander as well as the underutilized Daniel Wu provide the best aspects of Tomb Raider overall, though at least the camerawork and visual effects work are competent if thoroughly paint-by-numbers. Come to think of it, that's a good descriptor for much of Tomb Raider, it's painless but far too generic for its own good. If you had told someone in 2009 they were making a grim n' gritty Tomb Raider movie, this is exactly what they would have pictured (though the 2009 equivalent for Alicia Vikander, Marion Cottilard maybe, would have played the lead role). Even if Tomb Raider is the best live-action movie Lara Croft has gotten so far, that doesn't mean it's all that great on its own terms.
Posted by Douglas Laman (NerdInTheBasement) at 10:23 AM