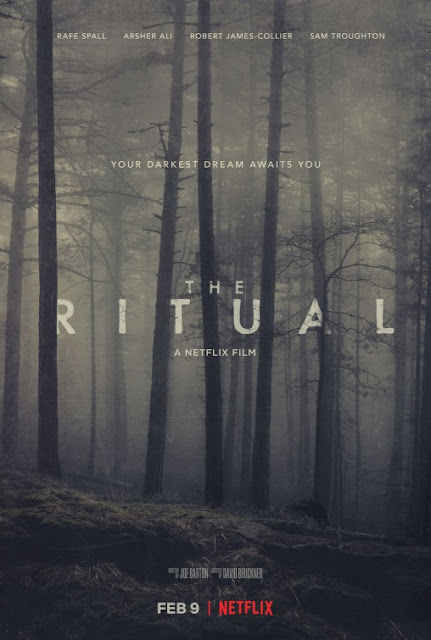 Don't go into the woods alone, that should be up there with not opening the door to discover where that creepy noise is coming from as go-to pieces of knowledge for horror movie protagonists looking to stay alive. That's what the lead characters of The Ritual decide to do as they head off on an extensive hike through Sweden and they want to take a shortcut to help ensure they can get proper medical help in a hurry for one of their injured friends. Part of the group is the film's protagonist, Luke (Rafe Spall), who is racked with guilt over not doing anything to help his friend during a robbery that ended up costing that friend his life.


Guilt over not being able to save his friend won't be the only thing on Luke's mind soon enough though as it soon becomes clear that Luke and his fellow hikers are not alone in these woods. Someone is following them and something is looking to devour them before their trek through these woods is over. A thriller about people slowing falling apart while getting lost in the woods can't help but echo the iconic horror movie The Blair Witch Project and while The Ritual isn't quite able to escape that movies looming shadow, it does its best to put its own chilling stamp on this type of horror story, most notably through having the story of being chased through the woods by some big monster serve as a parallel to the internal struggle Luke is going through.

Like The Void from last year, The Ritual has trouble with fully merging its more thoughtful character-based material with its horror movie trappings, but it's handling of Luke's survivor's guilt is handled in an interesting manner more often than not, most notably in the visually memorable motif of having the grocery store surroundings that Luke watched his friend get murdered in suddenly appear in the middle of the woods he's lost in. Rafe Spall also delivers a great performance that gets a lot of power out of conveying his characters pain in a muted manner, Spall convincingly depicts Luke as a man disconnected from everything around him as he navigates an omnipresent haze of guilt.

Rafe Spall really lends gravity to his character's plight through his performance, while director David Bruckner handles the movies horror elements well in a visual sense. Bruckner's camerawork shows a fine sense of understanding how long to linger on disturbing imagery without coming off as gratuitous, for instance, and he especially knows just how to, in the vein of Cloverfield or Alien, keep a sense of visual mystery surrounding the being that's hunting our lead characters down which leads to some highly suspenseful moments. The being itself is also well-designed and carries a unique look more inspired by Tolkien and other fantasy mainstays rather than your run-of-the-mill movie monster.

The main monster of The Ritual and a well-executed small-scale third act provide the most memorable of the scares found in the motion picture, which does tend to excel more on suspense rather than characterization with that shortcoming rendering the three other hikers Luke is traveling with as disposable individuals despite being played by actors who offer up game performances in their roles. Still, enough of how this feature handles Luke coming to terms with a hugely pivotal loss in his life works to lend some amount of substance to The Ritual, a diverting campfire tale of a movie.
Posted by Douglas Laman (NerdInTheBasement) at 10:14 AM