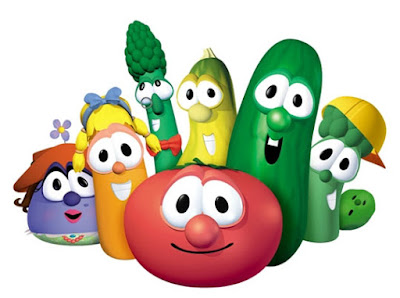 About a week ago this past Monday, I came back from a glorious trip to New York City that was basically life-changing, I spent five tremendously exhilarating days up in the city that never sleeps with a whole bunch of the best friends you could ask for. Obviously, such a high-quality trip would deliver all kinds of fond memories for those who went on it and one of the best memories I have in my time in New York came about when me and my friends were walking about at night en route to a tavern. One of my pals, a native to New York, calls out "Just keep walking guys!", prompting me to start to sing out some lyrics from the VeggieTales song Keep Walking.

I intended to just sing that small passage of the tune and then move on, but then another person in the group started singing along with me, prompting someone in the group to inquire "Are you guys talking about VeggieTales back there??" The entire group was suddenly united in our experiences with VeggieTales, a series of direct-to-video computer-animated specials starring vegetables who would impart Christian messages, one that turns 25 years old this year. VeggieTales was a cornerstone of my childhood as well as serving as my first exposure to both a number of pivotal Bible stories and awesome songs like The Hairbrush Song or Love My Lips.

VeggieTales was far from the only series of direct-to-video Christian children's programming, but it managed to rise above the pack simply by being fun to watch. There were plenty of lessons to impart unto children and each episode would end with QWERTY the computer (get it?) delivering a Bible Verse that was relevant of the story the viewer just watched. But there was also a witty streak to the program that ensured it wouldn't just be ham-fisted moralizing, a stark departure from many other similar programs whose attempts at humor were like nails on a chalkboard at best. The ways the writers would reinterpret classic Bible Stories into comedic kid-friendly tales (the story of David and Goliath becomes Dave and the Giant Pickle for instance) showed some real creativity.
Meanwhile, the famous Silly Songs With Larry segment ensured that each episode would come with a stand-alone catchy and humorous tune that you wouldn't be able to get out of your head. The best of these, like The Hairbrush Song or His Cheeseburger, excelled because of how much commitment they showed to the basic premises of such, well, silly songs. Anyone could make a kid-friendly song about looking for your hairbrush, but VeggieTales went and gave Larry's plight in searching for his hairbrush all the musical gravitas of Jean Valjean insisting to Inspector Javert that he only stole a loaf of bread in the opening number of Les Miserables. When you add in the various humorous visual touches seen in The Hairbrush Song, like the times dramatic lighting or extreme close-up's are employed, well, it's no wonder that this tune, as well as numerous other Silly Songs With Larry and various other VeggieTales songs, have ended up being so well-liked by people of all ages.
VeggieTales rocks and that's why it was so disheartening for me to read yesterday that the entire VeggieTales enterprise is basically canceled, for the time being at least. Phil Vischer, one of the creators of the program as well as the voice of numerous characters on the show like Bob the Tomato, noted on Twitter that the individual crews behind the direct-to-video VeggieTales specials and the Netflix VeggieTales TV shows have been disbanded. 2018 will be the first year since 1992, the year before the first VeggieTales video was released, where there will be no new VeggieTales content released. Even as someone who hasn't watched any new VeggieTales content in years (I watched an episode of the Netflix show VeggieTales In The House and it was...not good), it's a pity to hear that this series has, for now at least, come to a close.

Veggies In the House was a different crew. DVD crew was shut down 3 years ago - In the House crew when they wrapped last year. No crews left!
— Phil Vischer (@philvischer) January 11, 2018

Of course, it's certainly not surprising to hear that the stand-alone VeggieTales specials were shut down since the business plan of releasing two or three half-hour long pieces of children's programming for $20 on home video a year that worked so well in 1995 now seems like a fool's errand in 2018 when streaming channels like Netflix are how kids consume content. Hopefully, there will be a place for these vegetables in the pop culture landscape in the future so that they can bring the sort of joy and fun to new generations of kids that I so thoroughly adored as a youngster. After all, there may be countless kids TV shows out there, but as the VeggieTales theme song explicitly states, "There's never ever ever ever been a show like VeggieTales".

Posted by Douglas Laman (NerdInTheBasement) at 9:55 AM