In Laman's Terms: Ten Years Ago, I Had The Time of My Life Discovering Mamma Mia! 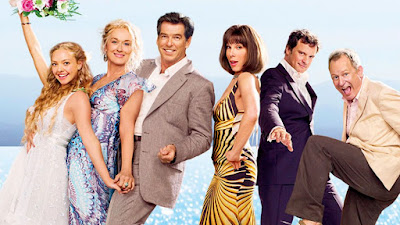 Today is July 18th. Ten years ago today, in the summer of 2008, one movie opened that managed to change our cinematic landscape forever. Breaking box office records across the globe and redefining what kind of money movies in its particular subgenre could do, it also managed to meet expectations of fans who had been waiting for it for so long.  Many have tried to imitate its success in the years since its release, but on its tenth anniversary, it's easy to see that there's really one and only Mamma Mia! Oh, and fellow July 18th, 2008 release The Dark Knight was also kinda influential, though the other movie opening on that day, Space Chimps, turned out to leave way less of a mark on pop culture than expected.


Mamma Mia! was a pop culture property that twelve-year-old-me had only a passing familiarity with prior to its film adaptation opening in July 2008. Unbeknownst to me though, my knowledge about all things Mamma Mia! was about to massively increase when, on only its second day of domestic release, my Aunt popped in on me watching an episode of Chowder to ask if I would care to join her and other female members of my family in going to a screening of Mamma Mia! Not one to pass up a chance to go to the movie theater, I happily accepted the offer, not having any clue what even the basic plot of Mamma Mia! was, let alone having any recognition of the music of ABBA that would serve as the entire driving point of the endeavor.

Our screening was packed to the gills with people all awash in excitement for what was to come. Such excitement proved to be infectious and I too soon was overcome with exhilarated with exhilarated anticipation for the coming attraction that I still knew nothing about. After an assortment of trailers (none of which I can remember save for the one for How To Lose Friends And Alienate People for some reason), the motion picture itself started and I was tossed into the saga of Sophie Sheridan (Amanda Seyfried) and her desire to discover the identity of her father in time for her incoming wedding. By the time Seyfried was only in the middle of excitedly singing Honey, Honey with her two best friends, I was fully enamored with what Mamma Mia! was throwing down and my love for what I was watching only increased from there.

Practically each and every scene brought out a new bouncy tune that had me tapping my toes, there was just so much energy and fun occuring on-screen that, like the pre-movie excitement of the audience at my screening, it became a sensation that's impossible not to get sucked into. All of the cornerstones of ABBA's discography that millions had known for decades were being heard my ears for the very first time and it was nothing short of a transcendent experience. That wasn't the only thing I got introduced to in this inaugural Mamma Mia! viewing though, looking back on it, I realize that this was also my first exposure to legendary performers like Meryl Streep, Pierce Brosnan, Christine Baranski and Colin Firth. So many parts of my pop culture diet that are now as commonplace as the very act of breathing were first introduced to me in that fateful Mamma Mia! screening.

It isn't just nostalgia that makes me love Mamma Mia! though, the film offers up plenty of reasons for one to be captivated by it without the aid of rose-colored nostalgia goggles. Perhaps most pivotally among its amazing qualities are two elements that most resonated with me in watching it for the first time a decade ago; the sense of omnipresent joy and the level of commitment from the A-list cast assembled to belt out these ABBA tunes in glorious sunny locales. The latter element helps make the former element resonate as deeply as it does, the likes of Meryl Streep refuse to sleepwalk here and go all-in on making this as fun of a ride as possible. Hell, even Pierce Brosnan's infamously poor vocals in the S.O.S. number reinforces how much of a difference it makes that the cast is giving it their all here.

Brosnan may have the singing ability of, well, me, but is that stopping him from giving it his 110% in his passionate emotional serenda to Meryl Streep? Hell no! Brosnan is still giving the number everything he's got and soon the level of effort he's giving in performing this tune wins you over. The energy and joy come through fully in the various musical numbers of Mamma Mia! and director Phyllida Lloyd makes the brilliant decision to place such wholly dedicated performances within the confines of musical numbers that are, like the performances, also swinging for the fences in their delightfully over-the-top details. I can't think of any other movie that would decide to have a bunch of dudes in scuba gear serve as backup dancers to a rendition of Lay All Your Love On Me while Christine Baranski's Does Your Mother Know? has all kinds of risque choreography that make it an innuendo-filled joyride.

The fact that we get so many of these kinds of musical numbers in the course of this one film that, no matter the tone, are always dialed up to 100 means Mamma Mia! never has time to become boring, it's too busy figuring out the next way it can create an energetic beachside ditty to end up as plodding. It's a feature film packed to the gills with entertaining musical numbers that I still find myself engrossed by after countless viewings so you can imagine how much my mind was blown upon leaving that special first time viewing of Mamma Mia! I had entered this screening a young man unfamiliar with even what ABBA was, but now I only ever wanted to hear their music until the end of time.

The summer of 2008 was filled with seminal movies, from the very first Marvel Cinematic Universe film Iron Man to WALL-E, one of the very best PIXAR films to Mamma Mia!'s opening weekend competition The Dark Knight. Would I say Mamma Mia! is the absolute best of all the movies that opened that summer? Probably not. Did it end up being one of the most influential of that summer's murderer row of motion pictures? I actually might, especially since Mamma Mia! helped solidify my adoration for musicals. Between seeing Mamma Mia!, Hairspray and Enchanted all in the theater in the span of a year, I was transfixed by what musicals were capable of as movies, they could do things that no other genre of cinema could do and that idiosyncratic nature that permeates the world of musicals is especially true of Mamma Mia! This is a wholly unique film with all kinds of delightfully wacky details to it in its performances and musical numbers that show a commendable sense of commitment from the actors and director Phyllida Lloyd to the immeasurable fun of so much of ABBA's music. That infectious sense of fun found all throughout Mamma Mia! still captivates me as thoroughly as it did on that fateful first viewing ten years ago.
Posted by Douglas Laman (NerdInTheBasement) at 9:46 AM