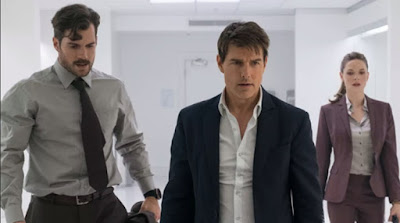 
Normally, franchises in their 22nd year of existence would be struggling to pull in audiences if they even still exist at all, but the Mission: Impossible movies just keep on chugging, mostly thanks to positive reception garnered by prior installments as well as marketing campaigns for newer entries that emphasize unique spectacle. That was certainly the case here as Paramount made sure to pump up the marketing campaign for Fallout with all kinds of large-scale mayhem, as well as making sure to differentiate it from its predecessors by emphasizing the presence of franchise newcomers Henry Cavill and Angela Bassett. If Fallout holds similarly to the last Mission: Impossible film, Rogue Nation, which also bowed in late July, it would make about $218 million domestically, enough to make it the biggest Mission: Impossible movie ever at the domestic box office.

Over in second place was holdover Mamma Mia! Here We Go Again, which fell 57%, significantly higher than the 36% second-weekend dip of the first movie, to add $15 million to a domestic haul that now stands at $70.4 million. Looks like this feature is well on its way to becoming only the thirteenth musical in history to cross $100 million at the domestic box office. The Equalizer 2 was hit hard by the presence of Mission: Impossible as the action film plunged 61% to gross another $14 million. With $64.2 million after ten days of release, this new Denzel Washington feature should finish its domestic run in the vicinity of $90-95 million. Falling 48% this frame was Hotel Transylvania 3, which grossed another $12.3 million for a domestic gross of $119.2 million.

Though its source material may be popular on television, Teen Titans Go! To The Movies failed to gain much traction in movie theaters as the feature grossed only $10.5 million over the weekend. Given that the feature cost only $10 million to make, that's not a terrible result, but Warner Bros. surely wanted more from the feature especially given the aforementioned popularity of the TV show. The marketing for the movie didn't do much to win over newcomers not familiar with the original television program, which is crucial for making these film adaptations of still ongoing TV shows work. Given the frontloaded nature of this title over the weekend, don't be surprised to see it top out with only $30 million domestically.

Ant-Man and the Wasp dropped 49% this weekend for an $8.4 million fourth weekend haul that puts its domestic cume at $183.1 million, just above the $180.2 million domestic gross of the first Ant-Man movie. Fellow Disney superhero title from summer 2018 Incredibles 2 went down 39% this weekend and added $7.1 million to its massive domestic gross that now stands at $572.7 million, while Jurassic World: Fallen Kingdom also fell 39% this weekend, though it grossed $6.7 million for a domestic gross of $397.5 million. Skyscraper continued to crumble as it dropped another 52%, giving it only $5.4 million for a $59.1 million domestic cume. Rounding out the top ten was The First Purge, which dropped 56% to gross another $2.2 million, bringing its domestic haul up to $65.4 million.

In its second weekend of release, Unfriended: Dark Web fell a harsh 59%, grossing $1.5 million in the process and giving it a 10-day domestic haul of only $7.3 million. In its third weekend of wide release, Sorry To Bother You grossed $1.4 million, a 49% drop from last weekend, giving it a domestic gross of $13.3 million. Expanding into a wider release (though not quite a proper wide release) this weekend was Blindspotting, which grossed an OK $1.3 million from 523 locations for a per-theater average of $2,533 and a 10-day domestic total of $1.7 million. Playing in just 158 locations, Eighth Grade took in $1.3 million for a fantastic per-theater average of $8,339, giving it a domestic total to date of $2.9 million. Also expanding its theater count this weekend was Three Identical Strangers, which played in 433 locations this frame and took in another $1.2 million (a 13% dip from last weekend) for a domestic total of $6.7 million.

The top 12 movies this weekend grossed a total of $146.2 million, about 5% ahead of this same weekend last year when Dunkirk led the box office again.
Posted by Douglas Laman (NerdInTheBasement) at 10:22 AM