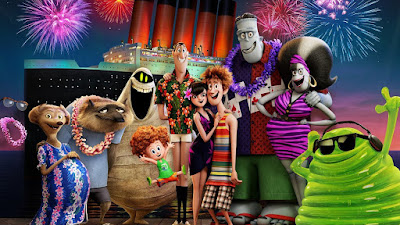 Audiences decided it was time for some R&R as they took a trip with Hotel Transylvania 3: Summer Vacation, which got off to a great $44.1 million start (it's grossed $45.3 million domestically thanks to grosses from a June 29th screening for Amazon Prime members). Though below the $48.4 million bow of Hotel Transylvania 2, this is still above the $42.5 million debut of the original Hotel Transylvania film and the second biggest Sony Pictures Animation opening weekend ever. A premise about the Hotel Transylvania characters going on a cruise ship wasn't enough to take the franchise to the box office heights seen by recent early July animated hits like The Secret Life of Pets, but it was good enough to ensure the franchise held better in its third installment than many prior animated second sequels. If it holds like other conventional summertime animated family fare, there's a good chance Hotel Transylvania 3 manages to crack $150 million domestically.

Ant-Man and the Wasp fell 62% in its second frame, grossing another $28.8 million. That's on par with the second-weekend drop of last year's early July Marvel Cinematic Universe movie Spider-Man: Homecoming. Interestingly, the only MCU films to lose over 60% in their second weekends are the only three (Captain America: The First Avenger is the third) to open in July. I wonder if the more competitive nature of July is the reason behind these larger second-weekend drops? Who knows, but Ant-Man and the Wasp has grossed a solid $132.8 million in ten days of release and is headed for a domestic cume in the rnage of $200-210 million.

Skyscraper became the second blockbuster box office bomb of summer 2018 following Solo: A Star Wars Story as it grossed only $25 million this weekend. That's one of Dwayne Johnson's weaker opening weekends in recent memory, coming in 17% behind the $29.8 million bow of Hercules in 2014 and only 3% ahead of the opening weekend of Race to Witch Mountain from nine years ago. Dwayne Johnson is a guy who is a box office draw in movies aimed at families, hence why the Fast & Furious movies, Moana, Jumani and Rampage all worked so well for him. But take him into something that doesn't have so much family appeal like Pain & Gain, Baywatch or now Skyscraper, he just doesn't excel as a box office draw. The fact that Skyscraper's marketing struggled to make the film stand out as more than a Die Hard knock-off didn't help Skyscraper, which will now look to the Chinese box office to help it make a profit on a $125 million budget.

In the face of a new animated family movie, Incredibles 2 dropped 43% this frame as it grossed another $16.2 million, giving it a $535.8 million domestic gross to date. Right behind the Parr family was Jurassic World: Fallen Kingdom, which fell 45% for a $15.5 million fourth weekend, giving it a domestic total of $363.2 million. Looks like this one will end up sneaking past the $400 million mark. The First Purge had a much better second-weekend hold than its predecessors as it fell 47% to gross another $9.1 million for a $49.5 million domestic haul to date.

Sorry To Bother You had a great expansion into wide release this weekend as it grossed $4.2 million from 805 locations for a per-theater average of $5,289 for a domestic total to date of $5.3 million. Looks like Annapurna has their first box office hit as a self-distributing studio and the summer of 2018 seems to have their first non-documentary arthouse crossover hit! In its third weekend of release, Sicario: Day of The Soldado fell 49% to gross another $3.9 million for a domestic gross of $43.2 million. Meanwhile, Uncle Drew fell 51% for a third-weekend sum of $3.2 million and a domestic gross to date of $36.6 million. Rounding out the top ten was Ocean's 8, which fell 42% to add another $2.9 million to a domestic haul that stands at $132.2 million.

The top 12 movies this weekend grossed a total of $156.7 million, down 1% from this same weekend last year when War For The Planet of The Apes lead the box office.
Posted by Douglas Laman (NerdInTheBasement) at 10:33 AM