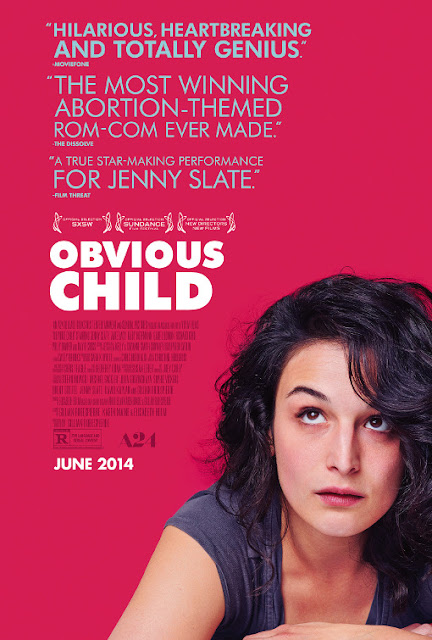 Why don't we talk about Obvious Child more? I know the film garnered acclaim in its initial theatrical release in June 2014, but man, I feel like writer/director Gillian Robespierre's work here deserves so much more recognition than it's gotten in the four years since it first came out. With Obvious Child, she's created such an entertaining and wonderfully low-key character study bolstered by a terrific performance from Jenny Slate. To boot, this movie is all about lending humanity to a scenario that's usually reserved as a go-to plot twist in a bad melodrama or as a source of villainy in a dreadful Christian movie starring Kevin Sorbo.

The scenario I'm talking about is the process of a woman getting an abortion, and in those aforementioned pieces of media, this scenario is only brought up so that it can be the sole defining trait of a female character, one that's supposed to earmark her for the viewer as either a villain or troubled because said female character, for any myriad of understandable reasons, decided not to have a child. What's brilliant about Obvious Child is that the prospect of getting an abortion isn't the sole defining feature of the film's main character, Donna (Jenny Slate), nor is it something that's meant to indicate she's evil. The idea of undergoing this procedure is just one part of her complex life while the process itself is depicted in a normal manner that dilutes the cloak of treachery conventional pop culture has placed upon the idea of getting an abortion.

The way Obvious Child handles the topic of a woman getting an abortion is just one way Gillian Robespierre's script impresses the viewer with its subtle ingenuity as it tells the tale of a New York City stand-up comedian Donna Stern (Jenny Slate) as she grapples with all kinds of personal life turmoil, including the closure of the bookstore she works at and her fractured relationship with her mother. There's also the matter of a one-night stand with a good looking guy, Max (Jake Lacy in a role much different from the one he played in Rampage), resulting in her becoming pregnant and now Donna is struggling with how to tell Max about her desire to get an abortion.

This story transpires in a wonderfully low-key manner that allows the viewer to get to really know Donna and understand how the various troubles she's going through are impacting her. Keeping things small-scale delivers a number of advantages to Obvious Child, namely in how it uses quiet bouts of awkwardness between Donna and Max or Donna and her mother, rather than big bombastic moments of melodrama, to signal turmoil for our lead character. Such well-rendered depictions of awkwardness show that Robespierre clearly has her finger on the button of reality which is something that's reflected throughout the rest of the movie too.

Most notably, the character of Donna is such a wonderfully realized creation from the moment she steps onto the screen. Right from the opening credits of Obvious Child that show Donna delivering a stand-up comedy bit about how crumpled up women's underwear gets in the course of the day, we understand that Donna is the kind of person that just says what's on her mind without reservation usually with an accompanying sarcastic retort ready to go. This engaging personality is well-established right off the bat and that makes it all the more fascinating to watch her struggle with bouts of indecisiveness as the plot of Obvious Child unfolds. Such a wonderfully realized complex character feels like such a fitting lead for Obvious Child which is all about how life is more nuanced and complex than one can expect.

Not only is Donna well-written, but she gets to be played by one of the most underrated American indie actors of recent years, Jenny Slate. Playing the complete opposite of the character she would play in Robespierre's follow-up feature Landline, Slate is extremely impressive in bringing the subtly layered nature of this character to life. Slate can make you laugh in one scene (her reaction to Max stepping in dog feces is so great) and then pluck your heartstrings like a harp with the instantly recognizable vulnerability of her character, with the latter element being especially apparent in an early scene where she waits outside her ex-boyfriend's house, all the while saying she's going to leave any minute now. It's an impressive bit of acting in a movie that serves a sterling showcase for Slate's immense talents as an actor.

The supporting cast turns in all kinds of memorable performances as well, with Polly Draper upending conventional depictions of a stern mother figure in her more complex than expected turn that feels like a nice companion piece to Jenny Slate's leading performance while Jake Lacy is just endearing as heck as Max. The strong cast work well with Gillian Robespierre's script which gives most of them (sans some intentionally one-dimensional figures like David Cross as an ex-flame who's the kind of guy who really would be this shallow in real life) some thoughtfully realized characters to play, ones with complexities and nuances a-plenty. It isn't just in the tragically rare kind-hearted manner in which it handles the topic of a woman getting an abortion that Obvious Child stands out as something special, it's characters, performances, Robespierre's direction, they all help to make this feature thoroughly remarkable. Now you can see why I think we should be talking about Obvious Child more!
Posted by Douglas Laman (NerdInTheBasement) at 11:36 AM