Mamma Mia! Here We Go Again Exceedingly Delivers On What It Needed To Get Right: Eccentric And Fun Musical Numbers 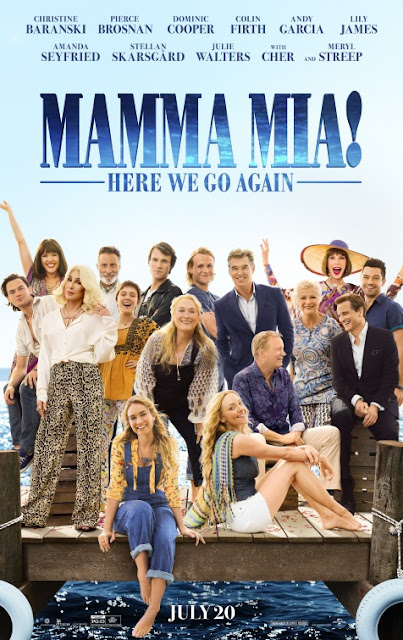 The most important question one must ask when making a follow-up to 2008's musical movie Mamma Mia! is simply this: will it have enough nuttiness and fun, frequently at the same time? A huge part of what made that original movie work was how often it just swung for the fences in terms of bringing to life eccentric musical fun, such as in sequences where men in scuba gear belted out ABBA tunes or Pierce Brosnan trying to harmonize his way through a rendition of S.O.S. By the time Mamma Mia!: Here We Go Again was concluding one of its very first musical numbers with a crowd of people in graduation caps and gowns on bicycles crooning I Kissed The Teacher, well, I knew this follow-up was keeping its predecessors gonzo sense of entertainment alive and well.


In terms of its plot, Mamma Mia!: Here We Go Again decides to take a cue from another American motion picture that heavily utilized ABBA musical numbers, The Godfather: Part II. While The Godfather: Part II followed the further exploits of Michael Corleone in the present while also delving into a storyline dealing with a young version of his father, this new Mamma Mia! films follow Sophie (Amanda Seyfried) as she prepares to re-open her mom's hotel while simultaneously exploring a young version of Sophie's mom, Donna (played by Lilly James), as she graduates from college and discovers the Greece hotel she'd dedicate her life to.

In both storylines, a massive bevy of musical numbers utilizing existing ABBA tunes, a good number of which already got utilized in the first film, get performed. Such extravagant performances are the whole reason for this production to exist, they're the lifeblood of these Mamma Mia! movies and thankfully, given how important they are, the musical numbers here are wonderfully realized. The Mamma Mia! movies are, unlike other modern-day musicals, not ashamed of being musicals, they race head-on into over-the-top choreography and elaborate dance numbers as people belt out peppy Swedish pop-rock tunes from the 70's and the results are frequently so incredibly fun that I was left with a big o'l grin on my face.

How can one not smile at the sight of Waterloo being performed, in an exquisitely over-the-top fashion, through a French restaurant or Cher doing an appropriately grandiose rendition of Fernando? Even better, director Ol Parker also departs from other recent musicals (most notably Beauty and the Beast and The Greatest Showman) in terms of his filmmaking in utilizing wider shots and also letting shots linger during musical number, thus allowing the viewer to really take in the imagery during these flashy sequences of spectacle. Distractingly frantic editing and claustrophically tight close-ups are mostly eschewed here as Mamma Mia! Here We Go Again wants the viewer to soak in every visual detail of their various musical numbers.

The deliriously joyful musical numbers aren't the only thing to have returned from the first film, the excellently committed cast has also come back. The best of the returning cast members, without question, are Christine Baranski and Julie Walters, Baranski especially shines in her effortlessly confident character. The rest of the returning cast members are usually just going through the motions in replicating the broadest traits of their characters in the non-musical sequences, but when you've got performers like Colin Firth and Stellan Skarsgard on hand, even more phoned-in performances are still entertaining to watch. As for the new players, Lilly James eschews settling for just a Meryl Streep impression and instead creates a wonderful lead performance by creating her own unique winning version of Donna in her younger days.

The script for Mamma Mia! Here We Go Again, penned by the film's director Ol Parker, isn't as overall successful in terms of structure or pacing as the musical numbers or performances, particularly in Seyfried's storyline which feels far less interesting than the flashback sequences. That being said, the screenplay isn't without its assorted charms, most notably in some lovely bits of dialogue (namely Baranski's characters first reaction to a character played by summer 2018 heartthrob Andy Garcia). The script, like a lot of elements of Mamma Mia! Here We Go Again, tends to feel like a retread of what worked last time, but when a movie is this much fun to watch, it's hard to get too worked up over the lack of originality. Ten years after the first film, this new Mamma Mia! movie can still dance, jive and bring some highly entertaining eccentric musical fun to life.
Posted by Douglas Laman (NerdInTheBasement) at 9:34 AM