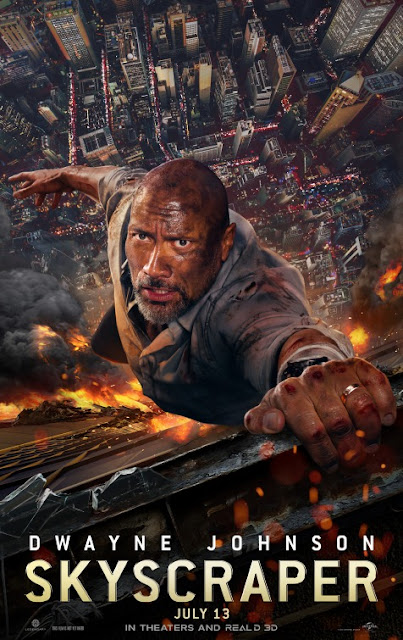 Skyscraper is very obviously being made in the mold of the iconic 1988 movie Die Hard and who can blame writer/director Rawson Marshall Thurber for wanting to make a film in that mold considering both how good Die Hard is and how there's a surprisingly large number of Die Hard emulators that have turned out to be awesome, most notably Roland Emmerich's criminally underappreciated 2013 gem White House Down. Unfortunately, Skyscraper will go down in history as one of the more middling Die Hard knock-off's, one that's shockingly bland considering its central premise is all about the leading man from Faster trying to break into a massive skyscraper that's on fire.

Before he's trying to accomplish such a feat, Will Sawyer (Dwayne Johnson) is your run-of-the-mill security assessor of major skyscrapers, one who has a loving wife, Sarah Sawyer (Neve Campbell), and two precocious kids. The newest building whose safety he's gotta inspect is a skyscraper called The Pearl located in Hong Kong, one that's explicitly said to be three times the size of the Empire State Building. It's a gargantuan building and one that Will and his family are staying in as Will goes through the proper protocols to make sure the place is safe for the public. During such routine procedures that take Will outside of the Pearl, the Pearl is attacked by Kores Botha (Rolland Moller) and his gang, with Sarah and the kids still inside.

Now Will's gotta single-handedly try to save his family while facing off against all these intruders with a secret agenda against the creator of the Pearl. The odds are against him...but that's just the way Will Sawyer like it! Everything I just described about the plot of Skyscraper is about the level of detail you get in the actual film, which really hinders the amount of fun the film is able to provide. The characters are especially disappointing in their lack of details, everyone from an on-the-ground law enforcement officer to the owner of the Pearl to Will Sawyer himself are lacking in distinguishing personality traits or fun details that might make them stand out in one's mind.

Even the villains, a role that, in a Die Hard knock-off like this one, should be a prime opportunity for some enjoyable scenery-chewing, are all thoroughly disposable, with Kores Botha having no real presence or menace as a villain, you'll forget about him before the credits start rolling. A lack of invention also creeps into probably the most important part of a summer blockbuster like Skyscraper, the various large-scale action set pieces, which tend to be derivative of better spectacle sequences from other blockbuster movies. A climax that's basically a serious version of the funhouse mirror sketch from Key & Peele caps off Skyscraper on an appropriately predictable note, complete with a final twist in the hero/villain confrontation you can see coming a mile away.

Writer/director Rawson Marshall Thurber is entering brand new territory as a filmmaker and a writer here in trying to create a suspense action thriller after spending well over a decade directing comedies like Dodgeball and Central Intelligence. Kudos to him for trying to step outside of his comfort zone as an artist, but his lack of experience in this type of filmmaking, unfortunately, definitely comes through in how generically filmed the various action sequences are. It also feels like Thurber was so intent on proving that he could do a more serious style of cinema that he forgot to bring any fun to the table, which might explain why the film opts for such a gloomy color palette and why all of the villains and other characters in Skyscraper are so gravely no-nonsense in their personalities.

Dwayne Johnson, opting to show off a predominately grey beard here to indicate his character is older you see, can never quite make Will feel like his own individual character like he did with his character in his last collobaration with Thurber, the far more enjoyable Central Intelligence. While Johnson's watchable in the part and he has reasonably good chemistry with Neve Campbell (whose performance and her character actually getting to be a part of the plot are probably the best parts of Skyscraper), it's probably one of his most paint-by-numbers performances as a leading man and, like the movie he's starring in, desperately needed a jolt of uniqueness.
Posted by Douglas Laman (NerdInTheBasement) at 11:19 AM