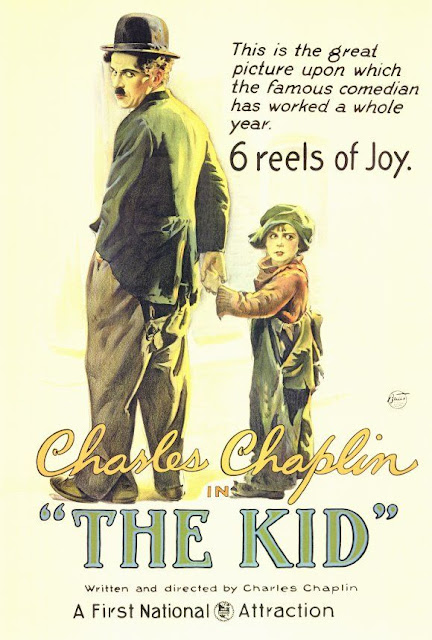 Transitioning from short films to feature films is a daunting prospect that many filmmakers and production companies have faced over the years, among them being Charlie Chaplin, a star of silent short films that found himself trying his hand at a longer-form of storytelling with 1921's feature The Kid. The runtime may be longer, but Chaplin's character The Tramp is very much the same fellow audiences had come to know and love while the type of physical comedy and level of quality that had made Chaplin such a revered cinematic icon in the past were very much in hearty supply on this bold new step in Charlie Chaplin's fascinating career.

If you're thinking this movie is about Charlie Chaplin getting into escapades and learning life lessons with a younger version of himself played by Spencer Breslin, you would be slightly off the mark. Instead, it's the tale of The Tramp (Charlie Chaplin) stumbling upon an orphaned baby whose mother, The Woman (Edna Purviance), has been forced to give up her child due to societal stigmas of being a single mom. The Tramp is unsuccessful in finding anyone else who can take care of the child and promptly decides to take up the responsibility of raising this child himself, with the kid (known only as The Child and John) growing up into a precocious youngster played by Jackie Coogan that helps The Tramp out on his window fixing service.

Both The Tramp and The Child end up facing all kinds of trouble that could result in them being separated, a situation meant to be taken seriously by the audience on an emotional level as indicated by opening text noting that The Kid is supposed to provide laughs as well as possibly a tear. Indeed, The Kid, though not as emotionally powerful as fellow 1920's silent movies Wings or especially the masterpiece Sunrise: A Song of Two Humans, does end up succeeding in its mission of getting one to be emotionally invested in the plight of its two lead characters, with much of that effective pathos coming from the realistically rendered loving father/son dynamic found in the performances of Chaplin and Coogan.

The two have highly natural interactions that help sell the idea of them being a devoted father/son duo while making sure that the Tramp's concern for The Child being taken away from him is entirely chalked up to his own personal devotion to the youngster rather than coming from financial desires or other self-centered means further helps make the primary relationship of The Kid one that's easy to get into. It's also impressive how Chaplin, who writes and directs this project in addition to starring in it, manages to organically integrate impressive extended sequences of physical comedy into the story at hand. Given that The Kid is explicitly trying to be more of an emotionally driven tale, scenes dedicated to Chaplin's masterful physical comedy could have felt forced in their presence here, but Chaplin makes sure they feel right at home in where and how they occur in the story proper.

The Kid also allows for Charlie Chaplin, as a writer, to indulge in a bit of fantastical whimsy intended to visually demonstrate The Tramp's innermost desires as that character dreams about being in a version of heaven in a sequence whose visuals and tone feel straight out of an Alice Guy-Blanche short film. It's hard to imagine such an extended dream scene being even considered for inclusion in one of Chaplin's earlier short films simply due to the constraints of pacing, but going into the world of feature-length storytelling has allowed Chaplin to expand his scope as a storyteller to more imaginative heights in addition to increasing the amount of pathos on hand.

Going into more expansive types of storytelling had allowed Chaplin to stretch himself as an artist in numerous ways, but he wasn't forgetting the extremely hilarious comedy that had garnered him so much acclaim in the process. The Kid see's Chaplin in rare form utilizing beloved elements of his past work while also blazing new trails for himself as a filmmaker and an actor. Nearly a century after it's initial release, it's fascinating to watch this pivotal chapter in this legendary artists career, especially since it's so entertaining even when divorced completely from its historical context. It doesn't reach the heights of City Lights, but few films, starring Chaplin or otherwise, do and The Kid is still superbly well-done comedy with some well-realized heart.
Posted by Douglas Laman (NerdInTheBasement) at 10:37 AM