A Man of Kindness Is The Subject of The Excellent And Emotionally Powerful Documentary Won't You Be My Neighbor? 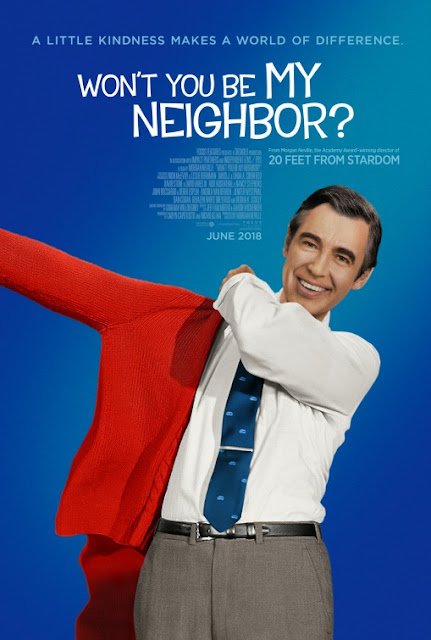 Kindness is so important. Considering how pervasively cruel the world can be, we owe it to ourselves and to those around us to try and impart kindness whenever we possibly can, even if such kindness manifests in the smallest of ways. But that's not really the default behavior of far too many in this world, with selfishness instead being the de facto behavior that people (myself, unfortunately, included) tend to engage in even subconsciously. If only we could look beyond ourselves and think about the well-being of others, maybe the world would be a better place. Maybe the world would be a little bit more like Fred Rogers, the subject of the documentary Won't You Be My Neighbor? and a source of hope for so many over numerous decades.


For the few of you reading this that are unaware, Fred Rogers was the star of Mister Rogers Neighborhood, a television program for children that ran for nearly forty years from the 1960's to the first year of the 21st century.  Rogers started out as a pastor-to-be who had his sights set on a career in theology but found himself enamored with the possibilities of the then brand new technology of television. He saw how much of the television programming aimed at youngsters was simply empty abrasive noise and decided to create something that was more substantive and would instill positive messages to the kids who would be watching it. The result was Mister Rogers Neighborhood, one of the most influential television programs, aimed at children or otherwise, to ever exist.

Won't You Be My Neighbor?, which comes courtesy of director Morgan Neville, explores how this show came to be as well as numerous other aspects of the life of Fred Rogers including how the show impacted the people who worked on it and how the program would tie itself into real-world issues in a way that was revolutionary. Similar to how Peanuts writer Charles M. Schulz would weave sociopolitical issues of the 1960's (like campus riots) into a comic strip aimed at youngsters, Fred Rogers made sure that his show addressed real-life tragedies, such as the JFK assassination, so that the program and its characters could help children process the daunting horrors happening around them.

Fred Rogers appreciated the intellect of his younger audience and Won't You Be My Neighbor? does a great job showing how Rogers conveyed this appreciation in his own show. Mister Rogers Neighborhood was a show all about elegant simplicity in every aspect from its sets to the behavior of its host and it can be all too easy to take that kind of beautifully executed simplicity for granted. But through Won't You Be My Neighbor, we get assorted interviews with personnel like Joanne Rogers, the widow of the subject of this documentary, or crew members who worked on the show for decades that offer insight into what part of Fred Rogers and his psyche impacted the show.

So much of Rogers own life, namely a childhood where he was frequently stuck in bed with all kinds of diseases, impacted what went on in this program and how he used it to impact the lives of others for the better. That latter element is another thing Won't You Be My Neighbor does an excellent job showcasing, the small but important ways Fred Rogers would interact with children and remind them that they're not alone. Rogers doesn't shy away from harsh realities of the world in these interactions, like when he's talking to a child whose cat recently died via the Daniel Striped Tiger puppet. There is no attempt to lie to this boy and tell them the cat will come back, but there is a successful attempt to connect with this child and remind them, in a moment where they feel surrounded by darkness, that someone out there cares about them.

Simply reminding others they have value sounds so simple, but it's something so many go their whole lives without being reminded of and Fred Rogers dedicated his life to instilling this message to all, a mission Won't You Be My Neighbor chronicles from the start of Fred Rogers' career in show business in the 1950's all the way to the shows ending at the dawn of the 21st century. Juggling all this material without making the film feel at all overcrowded is a remarkable feat, one that's accomplished by way of the documentary knowing when to keep things simple. Mister Rogers Neighborhood knew how to convey complex messages in a concise form and it's only appropriate that a documentary about the man behind such a show would be similarly succinct, to the point that director Morgan Neville knows that certain segments from the original show can speak about the power of Fred Rogers work better than any interview segment.

My favorite sequence in the whole movie is simply a vintage segment from the original Mister Rogers Neighborhood, one emotionally powerful enough and conveying so much of what Fred Rogers wanted to accomplish as an artist that the film smartly realizes the segment is powerful enough to just be shown on its own with minimal accompanying commentary. The segment in question (which is embedded directly below this pharagraph) shows Daniel Striped Tiger asking Lady Aberlin outright if he's a mistake. Noticing how his more kindhearted behavior differentiates himself greatly from the behavior of typical tigers, he then softly harmonizes his own worries that what makes him different also makes him a mistake. Though Aberlin reassures him in accompanying vocals that she likes him just the way he is, he still sings about his internal worries about being a mistake, a move that, as pointed out in the documentary, subtly normalizes for children the all too real experience of insecurities persisting even after getting kindly words of encouragement.

Through a singing tiger puppet, Fred Rogers captured the complexities of dealing with internal insecurities, a situation he and millions across the world are all too familiar with. Translating that into the world of children's television, a realm known in the 60's and even today as one that could only contain loud slapstick, seemed like an impossible mission, but it's one he accomplished and then some simply by imparting kindness to the world around him. The good deeds of Fred Rogers and what informed them are covered beautifully in the superb documentary Won't You Be My Neighbor. If you're like, you'll cry during this film about as many times as your heart soars. It's a beautifully realized emotional experience that feels like fitting tribute to a one-of-a-kind icon.