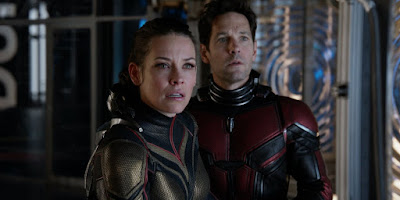 The third Marvel Cinematic Universe movie of 2018 and the twentieth movie MCU movie overall debuted this weekend to solid numbers as Ant-Man and the Wasp grossed $76.5 million. That's 34% bigger than what the first Ant-Man opened to back in July 2015, the seventh biggest opening weekend of 2018 and the thirteenth biggest opening weekend ever in July. On the downside, this was one of the more frontloaded Marvel Cinematic Universe movies, with a steep 30% decline from Friday's grosses on Saturday that can be partially attributed to its Thursday night gross ($11.5 million) making up a larger share of its eventual opening weekend than last year's early July MCU movie Spider-Man: Homecoming, which actually made more on its Thursday night showings.


Many, myself included, thought Ant-Man and the Wasp might be able to break out of its tracking and overperform like Fallen Kingdom did just two weeks, but instead Ant-Man and the Wasp ended up performing on par with its box office tracking. I'd chalk that up to the film opening directly in the wake of Incredibles 2 and Jurassic World: Fallen Kingdom as well as marketing that leaned too heavily on just appealing to MCU fanboys and fangirls when the biggest of these MCU movies have an all-audience appeal. But this is still a solid debut for the $162 million budgeted title that should have no trouble becoming the 16th MCU feature to crack $200 million domestically

In second place this weekend was fellow Disney blockbuster Incredibles 2 fell 37% this weekend, giving it a $29 million fourth weekend and a domestic total of $504.3 million, making it the first animated film in history to gross over $500 million domestically. Meanwhile, it seems Ant-Man and the Wasp stung Jurassic World: Fallen Kingdom in its third weekend as the dinosaurs fell 53% to gross another $28.5 million, ensuring that the newest Jurassic Park film has now grossed $333.2 million. If Fallen Kingdom can hold a bit better than this throughout the rest of July, there's a solid chance it could still clear $400 million domestically, which would make it only the second Universal movie (following Jurassic World) to make that much domestically in its initial theatrical release.

The Purge still made a killing this weekend, even if it was less of a bloodbath than its predecessors. The First Purge grossed $17.1 million this weekend, the lowest opening weekend of the franchise and down 45% from the opening weekend of The Purge: Election Year two years ago. However, The First Purge was the first entry in this series to open on a Wednesday and its $31 million domestic haul in its first five days of release is much closer to what its predecessors took in in their respective first five days of release. Not too shabby of a haul, especially since this one still only cost $13 million to make.

Won't You Be My Neighbor experienced its fifth straight weekend of weekend-to-weekend box office increases as it grossed another $2.5 million from 893 theaters for a per-theater average of $2,900. It's gross this weekend was a 7% increase from last weekend, an impressive feat considering it was already in wide release last weekend and wide releases, arthouse or otherwise, rarely increase from their first weekend of release to their second. This documentary has now grossed $12.3 million domestically. Rounding out the top ten was Deadpool 2, which fell 53% this go-around for another $1.6 million and a $314.5 million domestic total. Whitney premiered in 454 theaters this weekend and grossed a decent $1.2 million, the 24th biggest opening weekend ever for a documentary and the 13th biggest opening weekend ever for distributor Roadside Attractions.

In its second weekend of domestic play, Sanju fell 54%, giving it an additional $1.2 million for a $5.9 million domestic haul. Right behind it was Hereditary, which dropped 56% to gross $1 million for a $41.8 million domestic haul. Solo: A Star Wars Story, in likely its last weekend of wide release (it's currently playing in 778 locations), fell 63% from last weekend and grossed $982,000 for a domestic total of $210.8 million. Right behind that Star Wars adventure was another Disney blockbusters (lots of those in the marketplace), Avengers: Infinity War, which dropped 43% for an $865,000 eleventh weekend sum, bringing its gargantuan domestic gross to $674.7 million.

The top 12 movies this weekend grossed a total of $179.8 million, a solid sum for the first weekend of July, though down about 10% from this same weekend last year when fellow MCU title Spider-Man: Homecoming swung into a massive $117 million opening weekend.
Posted by Douglas Laman (NerdInTheBasement) at 11:00 AM