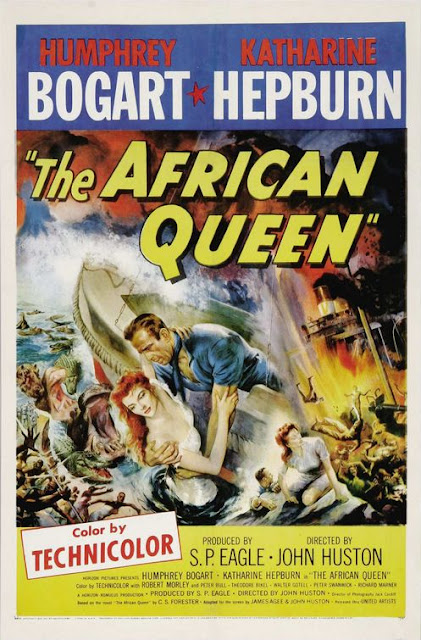 Akin to my experience with watching Casablanca for the first time two years ago, I realized just as The African Queen began that I was unfamiliar with the specific plot of this highly regarded 1951 motion picture. As it turns out, the story concerns missionary Rose Sayer (Katharine Hepburn), who, while being situated in East Africa, loses everything, including her brother, to the hands of destructive German forces. World War I has begun and all that Rose holds dear has become one of the early casualties of this conflict. Seeking revenge on those who destroyed her life, Rose procures the help of Charlie Allnut (Humphery Bogart) and his boat The African Queen for mission to destroy a ship that proves crucial to enemy forces.

In order to get to that ship, Rose and Charlie are gonna have to travel down the Ulanga River which is impossible to navigate. Trying to get down this river and watching this mismatched pair turns out to be the primary point of focus for The African Queen and it turns out to be perfect fodder to center a film around. It's hard to imagine pairing up two incredible actors like Katherine Hepburn and Humphery Bogart and not getting at least some level of entertainment, but The African Queen is a film that's actually good enough to be worthy of the talents of its leading actors, which, considering we're talking about Hepburn and Bogart here, is a massive compliment.

There's so much to love here in The African Queen, but perhaps best of all is how the screenplay (attributed to four writers, including the project's director John Huston) allows Rose and Charlie to be subversions of typical jungle adventure archetypes. The stoic male lead who can conquer any challenge presented to him in the jungle and the female damsel-in-distress are mostly eschewed in favor of making far more interesting characters in Rose and Charlie that deviate from such archetypes. Specifically, Charlie is a withdrawn soul who finds solace in liquor and constantly frets about potential dangers ahead while Rose finds constant thrills in navigating the perilous obstacles in their path.

Not only is is it cool to see the storytelling norms of this subgenre get upended, but the characters on their own merits are incredibly engaging on their own, especially when paired up with Hepburn Bogart's performances. There are few performers out there who could play undaunted conviction like Katharine Hepburn, it's a trait she made mesmerizing in her comedic work in the 1930s and 1940s and performing in a more dramatic feature like The African Queen hasn't diluted that skill of hers one bit. She manages to sell her poignant moments, most notably in how she conveys her character being composed but internally shattered right after her brother dies, beautifully while providing numerous moments of delight in showing Rose's unwavering commitment to her mission of vengeance.

Katharine Hepburn is top-notch here and to boot, she has great chemistry with Humphery Bogart, a man who was the Toshiro Mifune to John Huston's Akira Kurosawa or the Michael B. Jordan to Huston's Ryan Coogler. Bogart gets to play more of a light-hearted scoundrel here compared to the darker characters he played in past Huston efforts, like his morose detective in The Maltese Falcon or the doomed lead of The Treasure of the Sierra Madre, and it's a part that he plays in a highly entertaining fashion. Bogart is so adept at making Charlie a human being that he can go from delivering humorous lines of dialogue to playing the characters dependency on alcohol entirely straight on a dime without risking tonal whiplash. Him and Hepburn play wildly different characters, but both actors excel in The African Queen thanks to how well their performances sell the complexities found in these two characters.

It's a good thing for The African Queen that these two lead performances work as phenomenally as they do since so much of the script is just about their characters traveling down the river and gradually growing as people as they're growing closer romantically. It's a simpler story leaning heavily on just the interactions between the lead duo that shows a refreshing sense of straightforwardness, one whose streamlining nature allows the two characters to really come to life. Making so much of The African Queen just about intimate conversations between its main character means the viewer gets the chance to know and understand Rose and Charlie and that makes emotionally investing in their plight something that, to quote George Strait, "just comes natural".

Also worth mentioning is how having World War I be the backdrop to this already absorbing romance adds a subtly incorporated note of emotional potency to the proceedings. The people of planet Earth are engaging in the first-ever worldwide conflict that's providing chaos and destruction to so many innocent lives, but amidst it all, these two human beings are falling in love. It's a portrait of hopeful intimate romance set against a time of far-reaching despair, a concept that certainly could have been cornball schmaltz in the wrong hands, but luckily, director John Huston is the one steering the ship (no pun intended) here and he brings this idea to riveting and powerful life in The African Queen, a motion picture that manages to wildly surpass one's lofty expectations for how good a movie that paired up Katharine Hepburn and Humphrey Bogart could be.
Posted by Douglas Laman (NerdInTheBasement) at 2:27 PM