Stardust Is A Good Old Fashioned Fantasy Romp And A Highly Entertaining One At That! 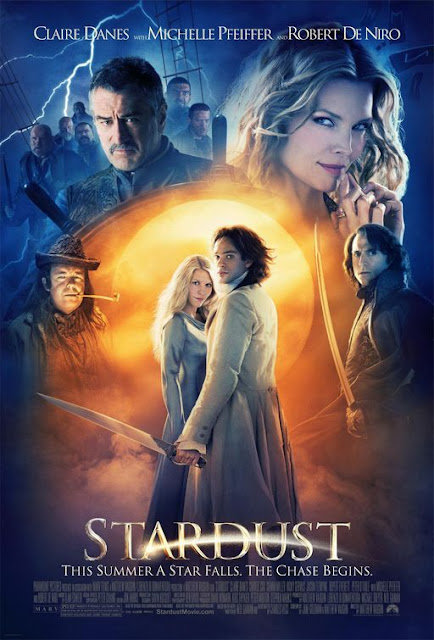 Among his numerous hallmarks as a director, Matthew Vaughn loves to play fast and loose with the comic books and graphic novels he adapts into movies. More often than not, Vaughn will basically just run with the core concept of what he's adapting into a film to better suit his own interests and desires most notably in turning Mark Millar's grim Kingsman graphic novel into a breezy Bond homage. Even X-Men: First Class, his feature most faithful to its source material, took liberties with what it was adapting and this tendency of Vaughn's is on full display in his first ever directorial effort, Stardust, an adaptation of a Neil Gaiman graphic novel that's far more family-friendly than its source material.

Having not read the original Stardust graphic novel, I can't say how Stardust the film compares to its source material in terms of overall comparative quality, but as a stand-alone film, I do feel confident in declaring Stardust to be an entertaining romp with a delightful amount of imagination on hand. Set in the 19th century, Stardust follows ordinary commoner Tristan Thorn (Charlie Cox) as he travels into a nearby hidden fantasy land known as Stormhold to retrieve a shooting star so that he may gain the love of a girl he fancies. The shooting star turns out to be a person named Yvaine (Claire Danes), one who is being pursued by a witch, Lamia (Michelle Pfeiffer), looking to use Yvaine's heart to secure a youthful appearance while Prince Septimus (played by Matthew Vaughn regular Mark Strong) seeks to retrieve Yvaine so that he may possess his kingdom's throne.

Tristan and Yvaine are now forced to outrun these two malevolent forces as they try to make it back to Tristan's village, a journey that'll see them getting to know each other as they survive all kinds of fantastical scrapes. Stardust is very much a classical fantasy tale told in a refreshingly non-cynical manner that must have seemed like a bolt out of the blue in 2007 when films were still enamored with following the path of box office juggernaut Shrek and cynically deconstruct fairy tales. There's a comedic streak in Stardust that sees's unorthodox personalities emerge in fairy tale archetypes (most notably in a pirate captain played with vigor and charm by Robert De Niro) but it's done more in the light-hearted fashion of The Princess Bride, where elements of subversive humor are a spice rather than the whole dish, rather than the obnoxiously self-aware style of the same year's attempt at comedic fantasy cinema Happily N'Ever After.

Approaching the world of fantasy with a sense of excitement rather than cynical condescension is one of the best parts of the script by Matthew Vaughn and Jane Goldman as is the stories ability to constantly come up with new creative characters, obstacles or story beats that take advantage of the possibilities offered up this fantasy world. A unicorn shows up for a pivotal fight scene, there are pirates in the sky, Prince Septimus's brothers show up throughout as ghosts that serve as spectators for whatever antics the characters are getting into, there's no shortage of inventiveness here in what kind of fantasy adventure that the characters get into. And I haven't even gotten to the scene where Claire Danes gives a passionate dramatic monologue to a mouse!

Such wit that makes no excuses for being a fantasy adventure is a key part of why Stardust is so much fun to watch, this is a film that clearly loves the world its characters inhabit and is so enamored with all the fun that can be had in said world that such enamorment ends up becoming contagious. The excellent production design and costumes further help make the realm of Stormhold truly come alive, an achievement that the all-around terrific cast is also responsible for. Legendary dramatic actors Robert De Niro and Michelle Pfeiffer sink their teeth and then some into their off-the-wall roles to thoroughly entertaining results, those two alone provide tons of fun in their performances.

Mark Strong, in one of his numerous blockbuster movie villain roles, provides a charming foe for our heroes to face while Claire Danes and future Daredevil Charlie Cox have charming chemistry together in the stories two lead roles. Matthew Vaughn has shown a real talent for getting remarkable performances out of large casts throughout his career (some off-kilter performances were the only real saving grace of his 2017 dud Kingsman: The Golden Circle) and Stardust is proof that was a gift he had right from the get-go as a filmmaker. Come to think of it, lots of Vaughn's traits as a director can be found within Stardust, though this might be his most fun directorial effort if only because none of his other features contain a glorious unicorn/man-goat showdown.
Posted by Douglas Laman (NerdInTheBasement) at 12:18 PM