The Spectacle Is Pushed Into Overdrive In The Exceptionally Exciting Mission: Impossible - Fallout 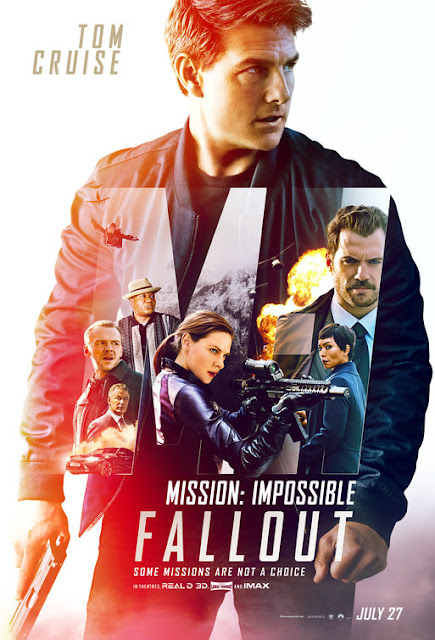 22 years after the first Mission: Impossible came out, you'd think this series would have run out of creative reasons for Tom Cruise to run really fast, but not only is this franchise still going on, its last two entries have been its strongest. Christopher McQuarrie's Rogue Nation and especially Brad Bird's Ghost Protocol were the two strongest installments in the Mission: Impossible saga yet with both carrying all kinds of inventive action sequences that put one at the very edge of their seat. The newest Mission: Impossible entry, Fallout, see's McQuarrie back in the director's chair and while the results aren't quite as good as Rogue Nation and Ghost Protocol, Fallout still finds this series in superb form and delivering the kind of thrills so many blockbusters can only dream about.


In a departure from prior Mission: Impossible movies which opted for (mostly) self-contained narratives, Fallout continues directly on from the end of the previous film, Rogue Nation, as the capture of Solomon Lane (Sean Harris), the head of evil organization Syndicate, has ended up spurring all kinds of evil activity, including the sale of some plutonium that Ethan Hunt (Tom Cruise) and his teammates fail to stop. Incurring the stern wrath of his superiors, Hunt must now track down that stolen plutonium with the help of new character August Walker (Henry Cavill), a mission that ends up getting complicated at every possible turn, especially once former ally Ilsa Faust (Rebecca Ferguson) unexpectedly shows up.

Per usual for this series, all kinds of confusion emerges on who can be trusted (only franchise fixtures Benji and Luther, played by Simon Pegg and Ving Rhames respectively, can ever be trusted!), though here things get so murky on who is on who's side that a portion of the second act focusing on just shifting allegiances ends up feeling slower than it should. Luckily, that's only a brief bump in the road and the movie as a whole does not end up succumbing to the convoluted confusion over who is loyal to who that sunk those Pirates of the Caribbean sequels. Aside from that one aforementioned brief lull in the proceedings, Christopher McQuarrie's script knows just how to play this uncertainty over who can be trusted for intriguing suspense rather than gratuitous confusion.

Said script is also packed with exciting set pieces that certainly live up to the high standards of spectacle that the Mission: Impossible movies have set. All kinds of rousing sequences of spectacle transpire here and, among many other positive features, I love the variety of environments that these sequences take place in. We get a big shoot-out set in a bunker, there's a bathroom fistfight, mountainside duels and suspenseful haywire skydiving, just to name a few, here, and the obvious variety in locales for the pivotal moments of action & suspense ensure that no sense of repetition begins to creep into the proceedings. The action scenes in Fallout are like snowflakes, no two are the same and they're all the better for it!

Christopher McQuarrie's penchant as a filmmaker to frequently opt for wider shots and let said shots linger for a while instead of just relying on close-ups and quick cuts also allows all those beautifully orchestrated spectacle sequences to really get seen by the viewer. You have the chance to take in all the details going into the excitement here thanks to the expertly executed camerawork while the way this movie understands the importance of well-realized visuals can also be seen in how McQuarrie carries over his obvious enjoyment for sequences devoid of dialogue from Rogue Nation to Fallout. Images by themselves can say so much if you let them, glad McQuarrie has remembered that in both of his Mission: Impossible movies.

Also carried over from Rogue Nation as well as prior Mission: Impossible movies is a wry sense of humor in "Gotcha!" reveals that take both characters in the film and the audience by surprise. Between these surprise twists & turns as well as the numerous exhilarating action sequences (the latter element looking particularly nice on a Cinemark XD screen, though I wouldn't say the 3D adds much of anything), is it any wonder Mission: Impossible - Fallout is so gosh darn fun to watch? Much of that fun also tends to come from the cast including franchise newcomer Henry Cavill who, on balance, gives one of the weaker performances of the main cast as he doesn't have the distinctive personalities that Simon Pegg and Ving Rhames convey so effortlessly, but he is quite fun to watch in his role here and he's certainly getting more of a chance to shine as a performer here than in any of the movies where he's played Superman.

Meanwhile, leading man Tom Cruise who reinforces again here that his best modern-day performances come from roles that emphasize the vulnerability of his characters (The Mummy is the exception to this rule, of course). His character, Ethan Hunt, gets taken into some interesting directions here that, without getting into spoilers, intersect with plot details of past movies in a satisfying and surprisingly thoughtful manner. Watching how well Mission: Impossible - Fallout handles the character of Ethan Hunt grappling with his past and present colliding reminds me why these Mission: Impossible movies have endured for so long. They always bring the spectacle, but they also don't forego some interesting character work and performances, not to mention oodles of filmmaking craftsmanship, in the process. In other words, while I don't know if you can or cannot fight the friction, you really shouldn't fight your urge to see Mission: Impossible- Fallout, it's a blast.
Posted by Douglas Laman (NerdInTheBasement) at 5:55 PM