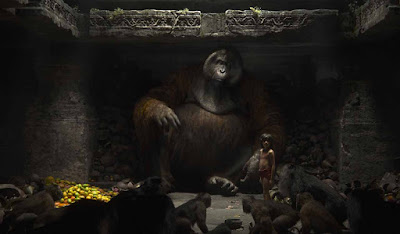 With one week to go until Summer 2016 officially kicks off at the box office, the final weekend of April 2016 proved to be a quiet one as audiences seemed to be hunkering down for the arrival of the newest Marvel Cinematic Universe feature (Captain America: Civil War) to kick the season off, just as the franchise has for all but two of the last eight summers. For now though, The Jungle Book continued to be an impressive box office performer by securing a third consecutive weekend atop the box office, scoring a $42.3 million gross this frame, taking its domestic cume to a massive $252 million.

That's only a 31% decline from its second weekend, a smaller third-weekend hold than all of the other live-action remakes of classic animated Disney movies by a notable margin. It's also worth noting that The Jungle Book had the seventh biggest third weekend of all-time, putting it just behind the third-weekend haul of the likes of The Dark Knight. Obviously, all-around impressive stuff that shows definitively that this new Jon Favreau film is carrying some majorly strong word-of-mouth with it as it heads into the first month of the summer.

In second place, The Huntsman: Winter's War didn't restore some gleam to its reputation this weekend, losing 51% in its second frame and grossing $9.4 million. This prequel/sequel has only taken in $34 million in ten days, a gross the original Snow White & The Huntsman surpassed in its second day of release. With Captain America: Civil War on its way next weekend, this one will almost certainly plummet in the next frame and it'd be a shocker if The Huntsman grossed much more than $45 million domestically.

At least Chris Hemsworth and crew outgrossed the largest of this weekend's crop of newcomers, Keanu, which became a minor box office misfire, opening to only $9.3 million. This one cost only $15 million to make, so New Line Cinema won't be too financially burdened by this performance. I'm a little surprised this one performed so poorly, since the posters seemed distinctive and the trailer always got a good reception whenever it played at movie screenings I attended. It's very likely that Key & Peele just aren't big enough draws on their own (it's worth noting that Amy Schumer had Bill Hader, Shaquille O'Neal, John Cena and Tilda Swinton backing her up in the ads of her debut leading feature Trainwreck) or perhaps an influx of other comedies this month (The Boss and Barbershop 3 both came out in the past four weeks) diluted the need for another comedy in the marketplace. For whatever reason, look for Keanu to make just a little over $20 million in its domestic run

In fourth place one can find another box office newcomer that majorly missed the mark, the newest Garry Marshall film Mother's Day, which bowed to only $8.3 million. Comparing it to the past two holiday-themed ensemble comedies Marshall has directed, this one was 85% below the opening weekend of Valentine's Day and 36% below the debut of New Year's Eve. Unlike those other comedies though, Mother's Day lacked romantic fun in its marketing, instead showcasing tired gags and more generic plotlines. It also didn't carry an A-list ensemble cast, with its lead characters being played financially hit-or-miss actors Jennifer Aniston and Julia Roberts.

In its ninth weekend of release, Zootopia came in sixth place to add another $5 million to its domestic cume, bringing its total in the US to $323.5 million. This Rich Moore/Byron Howard motion picture managed to outgross the opening weekend of animated family movie newcomer Ratchet & Clank, which debuted to a massively disappointing $4.8 million. In the twenty years of computer animated films existing, only seven computer-animated family films debuting in wide release have had worse opening weekends than Ratchet & Clank. In the realm of video game movies, it had one of the worst opening weekends ever, coming in barely ahead of the $4.7 million bow of Street Fighter: The Legend Of Chun-Li. Needless to say, Ratchet & Clank are DOA when it comes to the domestic box office.

Green Room expanded its theater count further to 470 locations and added $960,000, for a per-theater average of $2,043, to its domestic gross which now stands at $1.3 million. Thanks to Captain America: Civil War entering the marketplace next weekend, it's doubtful Green Room expands its theater count beyond its current count and will likely close its domestic run at $2 million. A Hologram For The King also added theaters this weekend, playing at 523 locations and grossing $931,000 this weekend, a small 18% decline from its debut gross last weekend. The newest Tom Hanks movie has now grossed $2.5 million. Meanwhile, The Man Who Knew Infinity bowed at 6 theaters and grossed $88,134 for an OK per-theater avergae of $14,689.

The Meddler added 20 theaters this frame, taking its theater count to 24 location, leading to it grossing an additional $174,369 this weekend for a per-theater average of $7,265. This Rose Byrne/Susan Sarandon vehicle has now grossed $240,000. Considering the film is centered on a mother/daughter relationship, conventional wisdom would think it'd be wise to expand the film's theater count drastically next weekend to coincide with Mother's Day. However, The Meddler is being released Sony Pictures Classics, which I'm presuming is being run by brain-dead primates at this point, so that will almost definitely not happen.

On the arthouse side of the equation, it's worth noting that March 2016 release Eye In The Sky continues to hang in there, as it's still in wide release (barely, playing in 614 theaters) and only lost 28% this frame for a gross of $863,000. This Gavin Hood film has now grossed a strong $16.3 million. Finally, a new IMAX feature, the Jennifer Lawrence narrated effort A Beautiful Planet, debuted this weekend to subpar results, grossing only $66,000 at 137 theaters.

Overall, the top 12 grossed $96.8  million this weekend, down 58% from this same weekend last year when Avengers: Age Of Ultron dominated the box office.
Posted by Douglas Laman (NerdInTheBasement) at 10:12 AM