Scream Is A Frighteningly Sharp-Witted Take On Slasher Movies 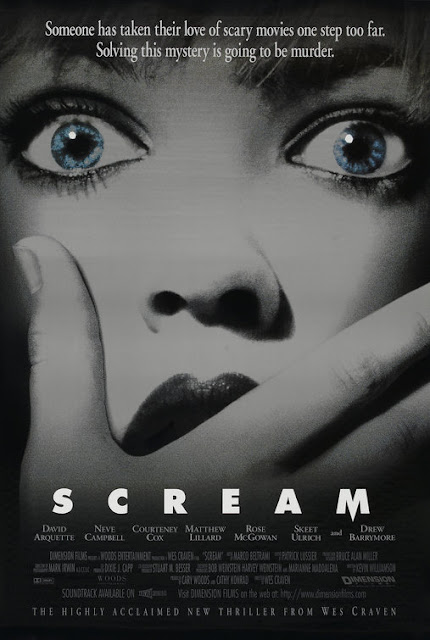 Scream was to slasher movies what Deadpool was to superhero movies. That may sound like the headline to some ill-fated Hot Take that ends up getting dragged all over Twitter, but it seems to make total sense to me, the guy who absolutely nailed the ending of His Girl Friday. Both Scream and Deadpool were attempting to tweak the noses of their respective subgenres, but neither were explicitly deconstructions of those subgenres thanks to how frequently they still indulged in well-known tropes of that subgenre, albeit in a self-aware manner. Thankfully, there's more than just a snarky self-aware streak in Scream, which has held up quite well in the more than two decades since its initial release.

Scream, much like The Lion King, opens with a sequence intended to let the audience know that it means business and that what you're about to watch is not the same-old-same-old formulaic dreck you might be expecting. A young woman, Casey Becker (Drew Barrymore), is alone in her house one night preparing to watch a movie when an unknown caller rings her up on the telephone making small talk that gradually becomes menacing. The tension gets slowly ratcheted up across this scene as a normal night eventually turns into a nightmare involving truly gruesome wounds and deaths and that transformation is exceptionally well-executed, particularly on the part of Drew Barrymore who depicts her characters escalating sense of terror at what she's become trapped in beautifully. Clearly, director Wes Craven is in rare form in executing this brilliantly intense scene.

The stage is now set after this landmark opening scene, time to get on with the story proper. Happily, Scream makes the right call to focus much of its story on the plight of Sydney Prescott (Neve Campbell), who is grappling with the impending one-year anniversary of her mother just as Casey's murder at the hands of a figure eventually known as Ghostface kicks off a killing spree. These slayings, thankfully, serve as an accompaniment to Prescott's personal struggles rather than as an interruption and that allows for her internal turmoil to get properly fleshed out while all of the dead bodies begin to pile up around her.

Whereas certain horror films feel more obligated than enamored with their characterization, Kevin Williamson's script is clearly fascinated by exploring who Sydney Prescott is and the various problems she's facing in her life ranging from troubles with her boyfriend Billy Loomis (Skeet Ulrich) to queries surrounding if she managed to catch the actual person behind the murder of her mother. All of these intimate quandaries lend depth to the proceedings and are handled expertly well by Neve Campbell's stellar lead performance that finds everyday humanity and small touches of nuance in this character even when she's outrunning a deranged masked killer that's just broken into her home.

The other way Scream sets itself apart from its brethren can be found in the way it handles its aforementioned slasher movie villain. In a direct contrast to the likes of Michael Myers, Leatherface or Jason Voorhees that got their menace from looming physical presences, Ghostface conjures up intimidating primarily through just his vocals. Roger L. Jackson's voicework for Ghostface, which is especially remarkable in how well it can go from sounding like a normal person to all of a sudden becoming a voice dripping with bloodthirstiness, makes the character scary even when he's never on-screen. When Ghostface does show up, the character still maintains a degree of scariness, though it is interesting to note that another discernable difference between Ghostface and many prior slasher movie villains is that Ghostface is intentionally more vulnerable looking than the likes of Jason or Leatherface, he's usually about as tall as his victims and can be kicked or hurt easily.

Yet another quality giving Scream its own distinct identity is its pop culture savvy dialogue that hasn't quite aged as well as other aspects of the film, not because the characters are engaging in conversations from a specifically 1996 pop culture lens but because some of the lines here would be clunky no matter what era of pop culture they hailed from, modern or otherwise. However, it does strike me as fascinating how Scream doesn't inherently project a fixation on pop culture as a good thing. It doesn't think movies are evil, but unlike a lot of aspects of 2018 pop culture like Ernest Cline novels, characters who become so absorbed into pop culture that they're distanced from reality aren't inherently thought of as good people.

On the contrary, our main villain, Ghostface, tests a person's knowledge of horror movie trivia as a way of determining whether or not they live or die. This particular slasher movie baddie uses all of that pop culture knowledge for malicious purposes rather than good and even the far more innocent cocky film nerd played by Jamie Kennedy who knows all the rules about surviving a horror movie is depicted as more of a weasely presence rather than the secret savior of the entire film. Who knew a 1996 horror movie like Scream would be so ahead of the curve on realizing that merely amassing a vast knowledge of nerdy pop culture does not automatically make you a God-like being? That's the kind of thoughtful commentary that helps make a movie like Scream so impactful on the horror genre even to this very day.
Posted by Douglas Laman (NerdInTheBasement) at 10:16 AM