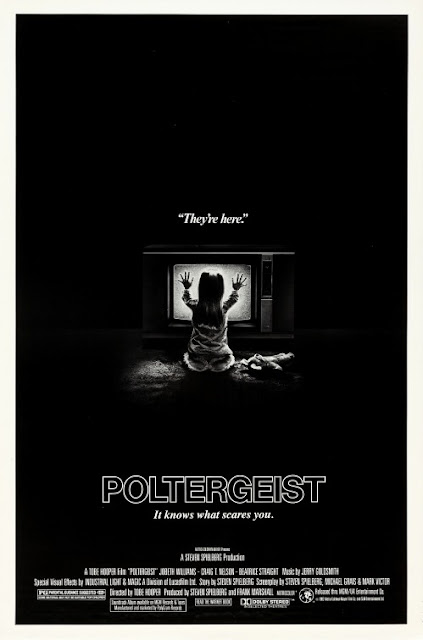 Roger Ebert was not feeling the good vibrations when he penned a mixed review of the Tim Burton directed turkey Planet of the Apes back in 2001. In this review, he mentioned at one point that, years down the line, it would still be the original Planet of the Apes from the 1960's that people would be watching instead of this more recent remake and a similar sentiment can be expressed for the original Poltergeist movie and its own remake. Back over Memorial Day weekend 2015, MGM released a high-profile remake of that horror movie classic that starred noteworthy actors like eventual Oscar winner Sam Rockwell and was even outfitted in 3D, but it's been totally forgotten about in the three years since its release, it's like it never even existed.


By contrast, the original Poltergeist still remains a beloved horror movie staple decades after its release. Though very much rooted in the 1980's, good filmmaking is timeless and that's helped the film to endure like an unrelenting spooky spirit. When I say this Tobe Hooper-directed horror feature is directly rooted into the decade it was released, I mean it, commonplace technology of this era plays an integral role in certain scenes and the opening scenes of the movie are dedicated to establishing the tranquility of 1980's suburban existence, one where kids pull pranks, Dad's try to watch football games and the Freeling family is hoping to make a good life for themselves.

Though clearly meant to evoke the sensibility that this could be any neighborhood in any city, my favorite part about these early scenes is the specific character details that emerge, namely in a nighttime scene with husband and wife Steven (Craig T. Nelson) and Diane (JoBeth Williams) that establishes their individual personalities through mundane pieces of dialogue and action in an entertaining manner. Much like The Exorcist, all of this emphasis on everyday peace and quiet is meant to make the presence of eventual supernatural madness that unfolds all the more pronounced and such a presence makes itself known once the families youngest daughter, Carol Anne (Heather O'Rourke) is taken by an unknown being.

Having previously already learned that there was some kind of supernatural presence in at least their house's kitchen, the Freeling parents turn to local experts in the paranormal to help retrieve their daughter. The portion of the second act showing the experts trying to scout out the home for any potential ghosts is the draggiest part of the proceedings in terms of pacing but at least it has the decency to deliver a handful of truly unsettling moments like one of the experts peeling his own face off. In probably the most brilliant storytelling decision in all of Poltergeist, it's eventually realized that the source of the supernatural force is the fact that the Freelings home, as well as the other houses in their sprawling suburb, were built on a cemetery that developers paid no mind to.

The fact that all of this haunting came about because of this total disregard for the past adds a fascinating layer to what's already a plenty interesting film. This suburban nuclear family life was typically thought of as the ideal way of living in the 1980's but Poltergeist slyly ponders what the cost of trying to capture that ideal is when you pursue it at the expense of others. It isn't just social commentary on the costs of 1980's excess and conformity that stand out in Poltergeist's screenplay (one of just six scripts Steven Spielberg has been credited with writing), the movies also got a delightful sense of how to depict the various horrors that befall this family while making sure said horrors fit into the conventional suburban environments that the Freelings inhabit.

For instance, an empty swimming pool in the background becomes an unexpected domain for skeletons, a TV becomes a place where spirits can communicate with the living and a closet can be a portal of some kind. All the default trappings of one of these middle-class suburban homes are twisted around into something far more sinister that relentlessly terrify the main characters right up until the final frame. As if that all weren't enough to make Poltergeist a stand-out horror film, all of the scares get accompanied by an eerie Jerry Goldsmith score that does wonders for helping to create the films uneasy atmosphere that's so chilling that it's no wonder Poltergeist, like the original Planet of the Apes, has so handily outlived its own modern-day remake.
Posted by Douglas Laman (NerdInTheBasement) at 12:15 PM