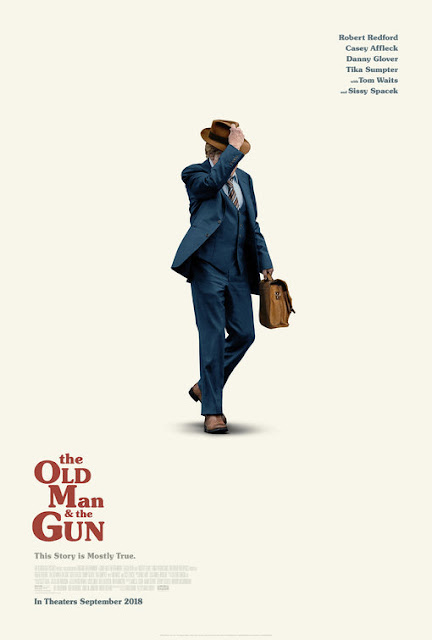 This is the third straight year that director David Lowery has delivered a new film and they're all quite different creatures. 2016 saw him enter the world of family movie filmmaking with the excellent Pete's Dragon, in 2017 he did an avant-garde exploration of life & death with A Ghost Story and now in 2018 he's delivered The Old Man & The Gun, which covers some common thematic ground with A Ghost Story. Specifically, both are wistful tales of how our own lives can impact others even after we're gone, though his newest directorial effort covers this material in a more light-hearted dialogue-heavy manner compared to the stripped-down nature of A Ghost Story.


Another thing separating The Old Man & The Gun from David Lowery's 2017 directorial effort is that The Old Man & The Gun is actually based on a true story, specifically that of notorious bank robber Forrest Tucker, who was a unique bank robber for a sundry of reasons. For one thing, he was over 70 years old, you don't see that every day in a bank robber, while he was also as polite to the people he robbed as the day was long, he never resorted to violence incessant gunfire while getting the money he wanted. Oh, and he never spent any of the money he got from these robberies, he just tucked it away into the walls of his house because getting rich wasn't the point of these robberies.

Tucker had been doing this for decades now and it was clear by now that he wasn't looking to hurt anyone, the thrill of robbing banks just made him feel alive like nothing else on the planet. The default approach to translating this story into film form would likely involve making this a wacky comedy (Going In Style 2.0 if you will) that emphasizes the incredulous nature of this true story, but David Lowery intentionally goes through great pains to make sure the ludicrousness of this true story isn't just the central focus of the proceedings. Instead, he decides to tell this true story in the same style as his last two directorial efforts and that means Forrest Tucker and his unusual life are used as the basis for a riveting melancholy character exercise full of intimate reflections on one's own past, present, and future.

Thankfully, Lowery eschews the traditional route of giving Tucker some tragic backstory to inform his bank-robbing ways and instead goes for the more interesting direction of just having Tucker be hooked on the sensation of robbing banks like a caffeine addict or a life-long smoker might feel about their own habits. Robert Redford, reuniting with Lowery after they worked together so well on Pete's Dragon two years ago, is all-around great in his lead role here but he's especially good at depicting how there's zero malice informing Tucker's behavior, he's just become so thoroughly committed to something he's spent his whole life doing, so why stop now? You know what they say about old dogs and new tricks after all.

Redford's excellent lead performance is also skilled at depicting the crucial gentleman aspect of his character, the manner in which he shows Forrest Tucker being gentle and genial to the bank employees he robs from makes it so clear why these employees always talk about his character being such a classical gentleman. Redford gets a further chance to shine in what may be the movies best sequence, a tete-a-tete between himself and Detective John Hunt (Casey Affleck), the latter being determined to bring Tucker to justice. What a fun sequence this is, a classic cat-and-mouse scene that boils everything down to two characters just talking yet still manages to keep your attention enraptured thanks to both Redford's performance and the writing of this sequence.

This is also probably the best acting from Affleck in the movie, who otherwise does serviceable but not especially notable work in what's probably the weakest performance in the film (it doesn't help that he frequently shares screentime with John David Washington who one wishes was starring in this movie instead!) The rest of the cast is doing sharp work though under Lowery's thoughtful direction which doesn't just extend to the movies thematic explorations but also to little visual touches like intentionally grainy imagery as well as specific pieces of camerawork and editing that are meant to make this feel like a movie straight out of the 1970's or 1980's. I wouldn't say it's quite as good as his last two directorial efforts (though that's a high bar for any film to clear), but The Old Man & The Gun is certainly another exceptional motion picture from director David Lowery that serves as a fine send-off for Robert Redford as an actor.
Posted by Douglas Laman (NerdInTheBasement) at 9:27 AM