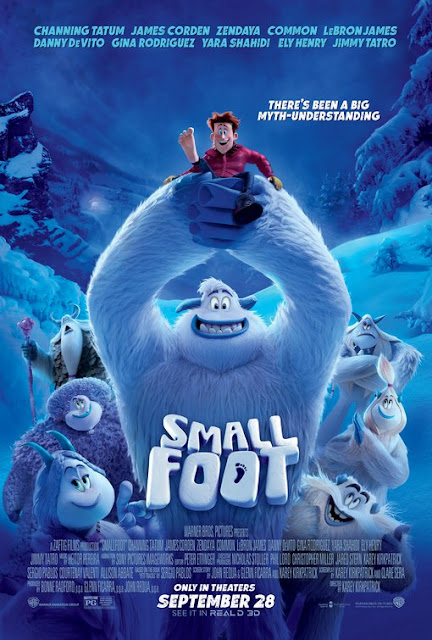 Smallfoot is a new animated family movie hailing from director Karey Kirkpatrick (director of the underappreciated Over the Hedge and the widely forgotten 2009 Eddie Murphy vehicle Imagine That) whose best qualities are the ways it tries to be unique and whose weaker aspects come from when it tries too hard to adhere to what it believes conventional American animated family fare has to be. The majority of our lead characters in Smallfoot are Yeti's who reside in a village located on the very top of a mountain. In this village, we find our lead character, Migo (Channing Tatum), who loves his simple life which is primarily spent preparing to take over the duties of his father, Dorgle (Danny DeVito), and adhering to ancient rules written on stones that nobody is supposed to question.

That strictly enforced law of just following tradition without question introduces one of the more successful aspects of Smallfoot, its social commentary about the importance of individualism, embracing the unknown and questioning authority. It's certainly not original material nor is it subtly presented, but it does lend an interesting backbone to the story that gives it more heft than, say, a Minions movie. Migo's devotion to just following ancient rules blindly is challenged when he accidentally stumbles upon a human being, or, as they're known to Yeti's, a Smallfoot, for the first time. Considering that one of the key rules of their society is that Smallfoot's do not exist, Migo's insistence that he did, in fact, see one leads to him being banished.

It is here that Migo discovers a group of outcast Yeti's, including object of internet virality Meechee (Zendaya), that believe Smallfoot's exist and convince Migo to go down below the mountain to find one and bring it back to their Yeti village. This leads Migo on a journey that's frequently predictable, but rarely dull, one rendered in solid animation that's provided by visual effects house Sony Pictures Imageworks. The animation of Smallfoot maintains the squash-and-stretch sensibility of prior Warner Animation Group effort Storks to ensure that characters like Migo have designs and movements that are ripe for physical comedy while the designs of the homes and locations in the Yeti village take advantage of aspects of the icy locale these creatures call home to create environments that carry a nicely unique look.

Also enjoyable are the musical numbers, yes, Smallfoot is a musical, something the features marketing has hidden away. None of them are even close to being the next Let It Go, but they are solidly crafted tunes in their own right, particularly in an opening musical number entitled Perfection belted out by Channing Tatum (between this and No Dames, we need to have Tatum sing in every movie he shows up in). This catchy as heck song takes the viewer through the main characters home in the vein of classic musical songs like Belle or Good Morning Baltimore while also slyly establishing how this Yeti society cheerfully snuffs out any sort of questioning of the status quo. It is a pity though that, like fellow 2018 Warner Bros. animated feature Teen Titans Go! To The Movies, the musical numbers vanish once the third act begins, Smallfoot's ending is especially just begging for a lavish musical number to help wrap everything up.

As for the requisite voice cast in Smallfoot consisting of celebrity voice-over's, Zendaya is giving the best voice-over performance as Meechee while Channing Tatum equips himself well in a goofball idealist role that he doesn't typically play in any film, animated or otherwise. It's also clever to cast Common in the role of the Yeti leader The Stonekeeper which allows him to use his media personality as a wise and commanding presence for more antagonistic means here. On the other hand, James Corden comes off as distractingly recognizable in the role of human Percy, he always sounds like Corden and not like a separate character (he also gets the worst song, a rap ditty set to the tune of Under Pressure), ditto for LeBron James in a supporting role.

Ely Henry gives the weakest voice-over performance of all in his part as obnoxious Yeti Fleem, an attempt to create a beloved comedic sidekick in the vein of Olaf the Snowman that misfires horribly,. The character comes up so short in being either endearing or funny that eventually characters in the movie begin to say what the audience is thinking and just openly declare "Fleem sucks". Obligatory pieces of bathroom humor and references to modern-day pop culture (twerking gets name-dropped!) are similarly unsuccessful in garnering laughs. As I said at the outset of this review, Smallfoot stumbles the most when it reminds one too much of a modern-day run-of-the-mill computer-animated film, but it has just enough of its own identity to make it a solid family movie you shouldn't give the cold shoulder to.
Posted by Douglas Laman (NerdInTheBasement) at 2:52 PM