Hausu Is As Immensely Entertaining As It Is Endearingly Strange 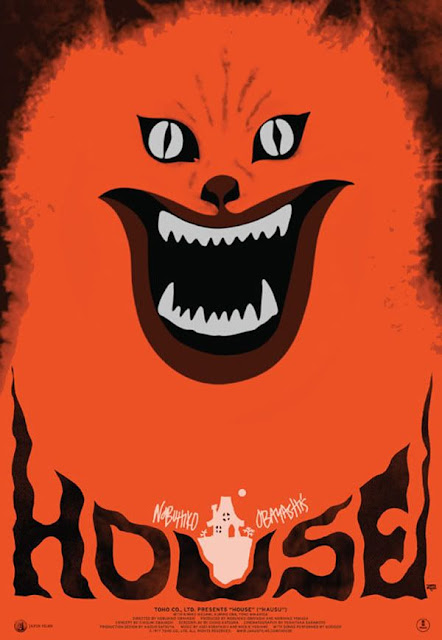 One of the most puzzling criticisms you can offer up a movie is that it was "too strange". Not that the strangeness didn't work for you or that the strangeness was poorly executed but that the mere fact that a movie was strange was just off-putting. I saw this a lot when Ava DuVernay's A Wrinkle In Time came out earlier this year and was greeted by numerous reviewers in a negative fashion for being "too weird". What's wrong with being weird or strange? I've already seen about 115 movies that have come out in 2018 and let me tell you, having the gall to embrace strangeness is a Godsend in a movie, it helps your story stand out from the pack. Maybe the strangeness won't work in execution, but I'll always tip my hat to a movie that opts to swing for the fences on weirdness rather than sit in the sidelines of normalcy.

If you thought the highly charming A Wrinkle In Time was too oddball for your sensibilities though, brace yourself, because the 1977 Japanese feature Hausu (translated as House in English) takes strange cinema to a whole other level. This is a movie whose penchant for absurd imagery and plot turns staggers the mind in the absolute best way possible. Directed by Nobuhiko Obayashi and written by Chiho Katsura, Hausu starts out as a happy-go-lucky tale of a group of girls, each going by a one-word name that sums up their personality, getting ready for the impending summer break and all the fun they'll have in their time not engaging in schoolwork.

Our main character is a young lady known only as Gorgeous (Kimiko Ikegami), whose hopes for a delightful summer are dashed when she learns of her father having a new girlfriend. Distraught, she decides to go stay with her reclusive Aunt for an extended time in the summer and invites her pals, as well as a mysterious new white cat, to join her. Once they arrive, the atmosphere shifts from friendly wacky sitcom to a haunted house movie on bath salts as the girls begin to vanish one by one at the hands of this corrupt house and the Aunt of Gorgeous who has her own malicious plans she's looking to execute. Hausu never really has a foot placed firmly in reality, but once the creepiness begins to take hold, it really just eschews all semblance of the real world and goes for broke on depicting utter madness.

This makes for an incredible cinematic experience that's immensely fun to watch no matter what portion of the movie you're engaged in. The early sequences establishing the home-life of Gorgeous and the dynamic between the group of friends, for instance, are delightful to watch thanks to the banter engaged between these long-time pals and what feels like a sitcom opening credits homage wherein each of the characters gets their name up-onscreen as they look at the camera.  The latter moment comes out of nowhere without any explanation but why should it need one? If it's fun to watch (and oh God, is it ever) then that's what counts above all else in a movie as gloriously entertaining as this one.

Much of that entertainment comes from how Chiho Katsura begins to segway from everyday friendship antics to ominous doom n' gloom midway through the movie, with this transition being helped by the fact that there's a fanciful quality to both aesthetics that help make this transformation function properly. In the horror-heavy second half of Hausu, literally anything can happen, the rules of reality haven't just been bent, they've been snapped in half completely and the movie takes full advantage of this scenario on a visual level with all kinds of well-realized sets and intentionally disorienting editing that put you directly into the perspective of the surviving lead characters who are trying to cope with all the madness occuring around them.

Just as the wrath of the Aunt is fully unpredictable, so are the actions of the various girls as they try to survive all this mayhem, particularly Kung Fu (Miki Jinbo), who won't go down without a fight and who stands out as a delightful creation in a movie packed to the gills with enjoyable characters like Gorgeous or a guy named Togo who is off in his own wacky road trip movie. Clearly, there's so much going on in Hausu and that's to its benefit since it results in a movie that well and truly is unlike anything else I've ever seen before (Mandy is the closest point of comparison I can draw here). Perhaps for those who find anything strange to be an immediate turn-off it'll be repellent, but for the rest of us, Hausu is an honest-to-God treasure of a wonderful bizzare movie.
Posted by Douglas Laman (NerdInTheBasement) at 9:51 AM