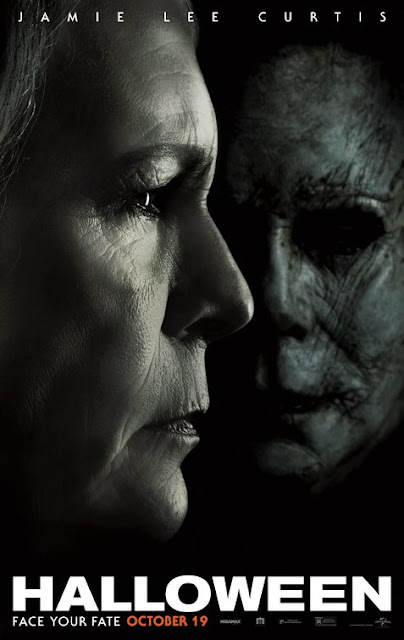 Call Michael Myers the Backstreet Boys, because he's back (ALRIGHT!). Yes, the slasher movie icon who served as the centerpiece of one of the numerous revolutionary horror films back in the 1970's is back in Halloween after nearly a decade of absence from movie theater screens. All the other sequels and the two Rob Zombie reboots have been disregarded to create a David Gordon Green directed follow-up solely to the original John Carpenter directed movie, one that picks up forty years after that fateful night that he came home that left Laurie Strode (Jamie Lee Curtis) permanently psychologically scarred to the point that she now resides in an isolated house that's fortified to the brim to keep anyone, especially Michael Myers, out.


Laurie is regarded as paranoid by everyone around her, including her daughter Karne (Judy Greer), but her fears stemming from all the trauma she's experienced prove to be well-founded once Michael Myers gets out of captivity on Halloween night 2018 and begins to slaughter once again. Though Michael Myers is about as famous as horror movie monsters go, he's not the central focus of the proceedings, Laurie Strode and how was impacted by the events of the very first Halloween movie are what take centerstage here and that's the element that actually manages to shine the most in this newest take on Halloween whose script was penned by Green, Jeff Fradley and Danny "I've Been Drinking Green Tea All Goddamn Day" McBride.

Surprisingly, much of the first act of Halloween deftly handles what it's like for Laurie to live with the lingering trauma of having survived Michael's rampage on a day-to-day basis and the varying ways this impacts the way she interacts with her extended family. We also get to see the ways people try to minimize the kind of horrors experienced by survivors of abuse or trauma by way of two podcasters who are trying to humanize Michael Myers at the expense of dehumanizing Laurie Strode. This is all hefty material that both the movie and especially the lead performance from Jamie Lee Curtis are very much well-equipped to lend substance to that allow the character of Laurie Strode to really come alive.

Focusing so much of the movie on Laurie's experiences and psyche provide the best moments of Halloween, most notably in an emotionally raw scene where Laurie tries to go out to dinner with her extended family only to be overwhelmed with grief over Michael Myers being transported to another prison earlier in the night. The gruesomeness of the first Halloween movie has immense ripple effects all throughout this follow-up and it's fascinating just how the writers decide to have those effects manifest themselves in the modern era whether it be from an older cop (played by William Patton) who was on the force when Michael first went on a rampage to how people in the age range of Laurie Strode's granddaughter Allyson (Andi Matichak) treat Michael Myers as an old-timey campfire story that's rife with inaccuracies.

All of that's thoroughly fascinating enough to make one wish the second act dedicated to typical slasher movie antics would get more character-focused again. It's a tricky near-impossible feat to pull off a motion picture that's simultaneously cognizant of the psychological trauma a person experiences when witnessing violence while also constantly wanting the viewer to go "Check out this gnarly looking death!". Halloween gets too caught up in reveling in over-the-top on-screen death scenes for people at the hands of Michael Myers that feel contradictory to its central themes that are all about lending real weight to the victims of Michael's first rampage. Such demises feel especially lazy when compared to the more creative ways of driving tension that are found throughout the film (motion sensors and teeth get put to especially good use in individual restrained intense sequences).

Once we get through a second act that's too heavy on brutal slayings and tosses out too many twists, we come to a climax that wraps things up beautifully with a small-scale showdown that's heavy on payoffs for our three lead characters (Judy Greer gets a really fun moment to shine that may be the best part of the whole movie) and is also incredibly well-done in terms of drumming up engrossing suspense that leaves you constantly guessing what might happen next. This ending provides the kind of restrained chills you'd want out of a Halloween movie while also delivering an impressively well-realized and realistic exploration of what it's like to have been like Laurie Strode in the years since the first Halloween. Unfortunately, the middle section of the movie is mostly derivative slasher movie fare complete with a retrograde choice for what type of teen girl has to die that, like the amount of on-screen violence, feels counterintuitive to the movies more thoughtful nature, but even here one can find positive elements like some creative camerawork and a hysterical performance from young actor Jibrail Nantambu.
Posted by Douglas Laman (NerdInTheBasement) at 2:13 PM