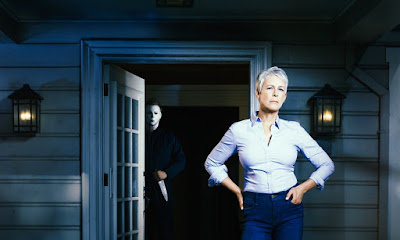 
Franchise revivals have become a common element (well, even more common than they already were) in the pop culture landscape but more often than not, it helps to have original cast members along in these revivals to goose nostalgia among audience members and add a sense of legitimacy to the proceedings. Having Jamie Lee Curtis occupy the lead role of this new Halloween movie and having it be about her character preparing for the return of Michael Myers helped make Halloween feel like The Force Awakens of horror movies in its marketing and with no other horror movies opening in October, the landscape was primed for the arrival of a major new horror event movie like Halloween.

In second place this frame was A Star Is Born, which grossed another $19.3 million this frame, a 32% third-weekend drop, which is actually an improvement over the third-weekend dips of early October sleeper hits The Martian and Gone Girl. Having now grossed $126.3 million, about three times its opening weekend over 17 days of release, it looks like A Star Is Born is headed for a final domestic gross of at least $170 million. Right behind that musical drama was Venom, which dropped 48% in the face of Michael Myers and grossed another $18.1 million for a phenomenal domestic haul of $171.1 million. Venom is headed for a domestic total of at least $215-220 million.

Goosebumps 2: Haunted Halloween grossed another $9.7 million this weekend, a 38% drop from opening weekend, a larger drop than the 34% drop of the first movie. Goosebumps 2 has now grossed $28.8 million after ten days of release. Meanwhile, hopes that First Man would have the box office legs of Bridge of Spies from three years ago got dashed this weekend as the Neil Armstrong movie dropped 46% this frame, a noticeably larger drop than the 26% second-weekend dip of Bridge of Spies. First Man added $8.5 million this weekend for a $29.9 million ten-day domestic total.

The Hate U Give expanded into wide release this weekend and grossed a middling $7.5 million, one of the weaker wide release launches for a film adaptation of a YA-novel (though it at least had a bigger opening weekend than far more expensive far in this subgenre like The Darkest Mind and Cirque du Freak: The Vampire's Assistant). The Hate U Give has now grossed $10.6 million, a sum that's surely beneath 20th Century Fox's expectations, but on a $23 million budget, they won't lose too much, if any, money on this widely acclaimed motion picture.

In its fourth weekend of release, Smallfoot dipped just 27% this weekend, the smallest weekend-to-weekend hold in the top twelve. Adding $6.6 million to its domestic haul, Smallfoot has now taken in $66.3 million, putting about 12% ahead of Storks in terms of domestic gross at the same point. Night School also held well this frame as it dipped just 35% to gross another $5 million for a $66.9 million domestic gross. Bad Times At The El Royale couldn't save face after its dismal opening weekend in its second frame as it dropped 53% to add $3.3 million for a domestic gross of just $13.3 million.

The top 12 movies this weekend grossed $160.3 million, the biggest 42nd weekend of any given year and the second-biggest October weekend of all-time. With massive hits like Venom, Halloween and A Star Is Born around, October 2018 will have no trouble surpassing the $758 million sum of October 2014 to become the biggest October in the history of the domestic box office.
Posted by Douglas Laman (NerdInTheBasement) at 10:51 AM