Bad Times At The El Royale Is A Mostly Good Time 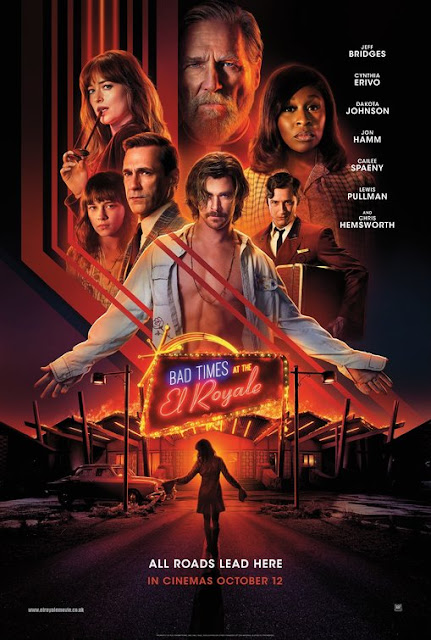 After six years of waiting since his directorial debut project The Cabin in the Woods turned out to be such a phenomenal blast, writer/director Drew Goddard finally returns behind the camera with Bad Times at the El Royale. Interestingly, despite having a larger cast and a bigger budget to work with, Goddard (who also wrote the scripts for Cloverfield and The Martian) goes smaller-in-scale than he did on Cabin in the Woods. No threats of zombie rednecks or possible worldwide consequences for the actions of our lead characters here, instead, Goddard does a Rashomon-esque take on a quasi-Hateful Eight set-up wherein we follow the differing perspectives of a group of strangers staying in one location over the course of a solitary night.


To get more specific, all of these people are staying at the El Royale hotel, a bi-state establishment that's half located in Nevada and half located in California, in the year 1969. Among the strangers staying here are singer Darlene (Cynthia Erivo), priest Daniel Flynn (Jeff Bridges), vacuum cleaner salesman Laramie Sullivan (Jon Hamm) and mysterious hippie Emily Summerspring (Dakota Johnson). They all meet in the hotel's lobby in the film's opening scene before going off into their separate rooms, the story begins to divide itself into distinct chapters focusing one person's perspective at a time as the individual backgrounds and secrets of these people begin to crash into one another as well as against the hotel and its lone staff member, Miles Miller (Lewis Pullman).

Watching everyone get in over their heads at this hotel and getting some background context for how they ended up here in the first place turns out to be entertaining more often than not especially since Goddard truly commits to a slow-burn style of storytelling that dedicates entire scenes to just showing Broadbeck silently digging up listening devices or Flynn and Darlene talking over drinks. Whether it's communicated subtly or as overtly as a whiskey bottle to the head, there's always a sense of unease hanging over these scenes and Goddard has some fun unveiling how the individual personalities of the various characters at the El Royale inform that sense anxiousness. If you're gonna be leaning heavily on atmosphere, it's good if your movie has an interesting atmosphere and luckily, Bad Times at the El Royale has a mighty fine uneasy atmosphere that it gets a lot of mileage out of.

Despite the fact that the vast majority of these movies is just characters spouting dialogue meant to explain what's going on in their head, the biggest fault with Bad Times at the El Royale is how it shortchanges the character of Emily Summerspring, a life-long survivor of abuse that's shockingly given the least to do in the story despite being the only one dealing with a serious real-world issue that requires some substantive exploration to be handled properly. Instead, she's barely given any flashbacks to flesh out her personality which is almost as shocking as how little she factors into the climax that has David Koresh-esque cult leader Billy Lee (Chris Hemsworth) tying up everybody in the cast and threatening to kill them.

She and her sister, Rose Summerspring (Cailee Spaeny), are the only ones to have a previously established personal connection to Lee, so it'd seem natural to have them be centerpieces of the finale. Instead, they're tragically relegated to the background and both an opportunity to lend some much needed built-up tension to the sequence as well as a chance to explore their individual psychological states is missed in a climax that struggles to pay off or build off of existing plotlines even when ignoring how it specifically underserves Rose and her sister Pity that the finale (which does have some moments of brilliance, namely anything involving Miles Miller) too often doesn't feel like a proper payoff to what's come before it since this is the only part of the movie Hemsworth appears in and he is delightfully off-the-wall in his Minnesotan accented turn as a deranged figure of menace.

Most of the rest of the cast deliver work as memorable as Hemsworth's performance, Cynthia Erivo, in her first feature film acting credit, being the most notable stand-out in a role that allows her the chance to utilize her outstanding singing voice multiple times. For a man so well-known for playing one of the all-time iconic slackers, Jeff Bridges sure can bring assured gravitas to a role when he needs to and he does just that here in his turn as Daniel Flynn while Lewis Pullman (who looks eerily similar to the actor that was apparently first up for the role of Miles, Tom Holland) impresses in his performance as a tortured bellboy. Dakota Johnson and Cailee Spaeny don't get much to do in the script but they work well with what they get and it's especially lovely to see Johnson playing such a no-nonsense personality in a sharp contrast to the bits and pieces I've seen of her Fifty Shades work.

Those performances and Goddard's writing, not to mention a lovely noir-influenced score by Drew Goddard's regular composer Michael Giacchino, are at their best when they're just serving a subdued atmosphere of uncertainty compared to a third act that just doesn't feel like a satisfying wrap-up to the rest of the story. That's probably why Goddard's sophomore directorial effort Bad Times at the El Royale works better when we're watching the puzzle pieces coming together rather than watching the finally completed puzzle, but it is more often than not entertaining to watch everything gradually fuse together in this homage to cinema of the past, that 141-minute runtime flies right by.
Posted by Douglas Laman (NerdInTheBasement) at 10:42 PM