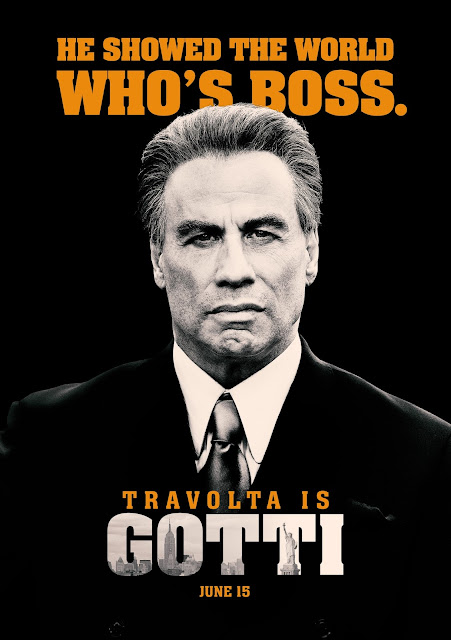 
Gotti begins with notorious gangster John Gotti (John Travolta) talking to the audience and introducing himself as a legend to be reckoned with (this framing device only crops up again for a brief coda to close out the movie). From there, we go through a checklist of assorted major events in the life of John Gotti, the years start coming and they don't stop coming (as Smash Mouth might say) as the movie just trudges from one real-life achievement that Gotti had to another with no real narrative flow motivating the story beyond "And this is what Gotti did next". Under the direction of Kevin Connolly, this uninvolving story structure means we never get to really know Gotti or any of his close friends and relatives as people, with even something as profoundly upsetting as the death of Gotti's young son just coming and going without much impact thanks to how much of a hurry Gotti the movie is to shove in every big life event its lead character experienced into one motion picture.

The overall story is eventually revealed to be depicting Gotti's rise to power in the Gambino Crime Family, with Gotti always wanting more and more power in the organization and eventually arranging a hit on the leader of the Crime Family so that he can overtake that position himself. Gotti, already famous for having gotten acquitted in court multiple times, becomes a well-known figure in his time as the leader of the Gambino Crime Family, which eventually involves his son, John Gotti Jr. (Spencer Lofranco), as well. Taking a cue from Matthew McConaughey only really caring about his daughter in Interstellar, we only ever see Gotti in this movie show any affection towards his son out of his numerous children.

At least Gotti makes it clear that Gotti loves his son, there's very little in the way of tangible relationships that occur between the rest of the characters, who all range from being boring stereotypes to overbearing stereotypes. None of the actors here nor the two screenwriters responsible for this script can ever find even a trace of humanity in these mobsters that grounds them into reality, Gotti and his cohorts are not recognizably people, they're just like subpar versions of Fat Tony and his gang from The Simpsons. Since Gotti really wants to make this a sympathetic portrait humanizing Gotti at every possible turn, the fact that they can never make him something even close to a discernable human being is a massive problem.

In case you think I'm misinterpreting Gotti as a pro-Gotti vehicle, the last five minutes of this movie makes it clear that that's exactly what this is supposed to be. We get to see actual footage of people praising Gotti at his funeral while a court trail for Gotti's son has Kelly Preston (playing Gotti's severely underdeveloped wife) blurting out the movies whole thesis by bellowing in the courtroom "The people in the government are the real criminals!" In its last five minutes, Gotti the movie goes from being tepid as day-old bathwater to suddenly being enraged at a system that dares to incarcerate Gotti based on testimony from a witness that the film explicitly shows to be telling the truth. The way Gotti uses on-screen text to convey the idea that "violent criminals" were released onto the street after their testimony was used to incarcerate a little o'l murderous criminal like Gotti reminded me of nothing more than that one Simpsons joke where Sideshow Bob, in his campaign to be Mayor of Springfield, attempts to undermine his rival, Mayor Quimby, with a TV ad saying Quimby was so bad as a mayor that "He even released Sideshow Bob [from prison]!"

What a strange way to end the movie, with an obvious attempt at painting Gotti and his family as some victim of the Justice System that doesn't work at all because of just how confused it is. That's not the only part of Gotti you'll find yourself either rolling your eyes or being bamboozled by though, we also get plenty of atrocious dialogue that even poor Stacy Keach can't manage to make work in his line deliveries. There's also the rampant needle drops that range from the unimaginative (a somber version of Silent Night playing over a gangland assassination, how clever!) to the humorously bizarre (even if he produced an original song for this movie, how the hell do the creators of Gotti justify multiple Pitbull songs from the 21st century being played at a Gotti-hosted BBQ that takes place in the 1980's?)

And then there's the performance of John Travolta as John Gotti himself. Travolta s a man who goes all-in for his performances, which sometimes leads to grade-A schlock and in the likes of Hairspray, Pulp Fiction, The Taking of Pelham 1 2 3 or Face/Off leads to something actually wildly enjoyable, the guy can deliver a wide variety of crowdpleaser performances on his best days. What's shocking about his work as Gotti is that it's probably the most lethargic performance I've ever seen Travolta give. Despite saying each of his lines in a thick accent and doing so many hand gestures, Travolta just doesn't bring much, if any, personality to his take on Gotti, he's never intimidating as a mob boss nor does he come across as a loving family man in the scenes with his characters wife and son. Travolta doesn't even get a memorable over-the-top scene where he gets to chew the scenery, the movies slavish reverence for portraying John Gotti as a mythic martyr figure leaves John Travolta with no chances to go hog-wild like he's done so well in the past. Travolta looks about as bored headlining Gotti as the viewer being forced to sit through it.
Posted by Douglas Laman (NerdInTheBasement) at 10:32 AM