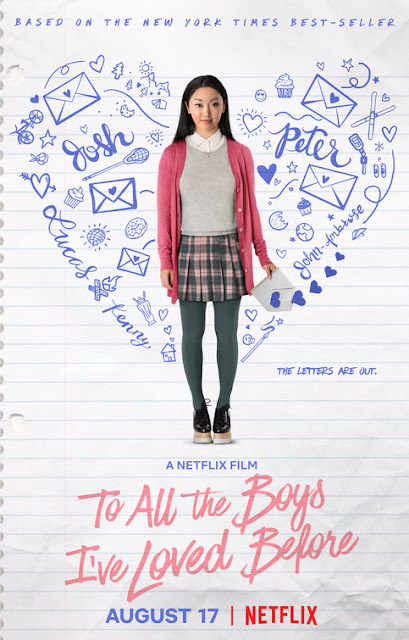 2018 will be known as many things in the future, most of them bad (especially in the realm of American politics), but on a happier note, maybe 2018 will also go down as the year Netflix's original movies division finally took off? After three years of trying to getting people's attention with pricey star-studded duds, turns out all it took for Netflix to capture the masses was to create films that aren't getting made in large quantities by major American studios, like romantic-comedies (Set It Up) or in the case of To All The Boys I've Loved Before, High School dramedies. Pity the theatrical studios aren't making more of these since not only is Netflix making a killing appealing to these underserved audiences but they're also making charming movies like To All The Boys I've Loved Before.


Based on a 2014 novel by Jenny Han, To All The Boys I've Loved Before is directed by Susan Johnson and tells the story of Lara Jean (Lana Condor), a shy High Schooler whose older sister has just left for college abroad As if that wasn't enough change to adapt to, Lara Jean has had a long-time crush on her neighbor Josh (Israel Broussard) that just got complicated by the fact that Josh has just gotten broken up with by Lara Jean's recently college-bound sister. Like with the only other four guys she's had a crush on over the years, Lara Jean has penned a letter meant for Josh that she's sealed up in an addressed envelope and then hidden away from the world.

It's a way to cope with her feelings without having to actually go out and act on them, one that's worked pretty well for her for years...until all the letters suddenly get sent out to all of her crushes, including Josh. Hoping to still win Josh over even after he's received a letter talking about how crazy she is for him, Lara Jean sets off on a plan to form a fake relationship with Peter (Noah Centineo) to make Josh jealous and eventually win him over. All kinds of other romantic quandaries emerge in all this deception, some of them on the predictable side of things for sure but thankfully the script by Sofia Alvarez is far heavier on more memorable creative touches stemming from the lead characters well-realized personality

That personality consists of Lara Jean being an introverted individual thrust into being a more socially outgoing person once she's gotta engage in a romantic facade to try to win over Josh and there are some solid pieces of both humor and characterization wrung out of Lara Jean trying to become more acclimated to these unfamiliar surroundings, though they smartly don't play that unfamiliarity to such a degree on a comedy level that it ends up feeling like To All The Boys I've Loved Before is mocking its lead character. On the contrary, one of the best parts of this movie is how it adds a humanizing angle to the teen movie archetype of the introverted bookworm by way of exploring Jean's complicated relationship with her sister and her struggles with getting outside of the fantasies in her own head.

The lead character gets portrayed by Lana Condor who becomes the second supporting actor who got nothing to do in X-Men: Apocalypse to prove she's got real acting chops in a movie adaptation of a YA-novel after Alexandra Shipp in Love, Simon. Just like the script, Condor infuses the role of Lara Jean with some real depth thanks to just how natural her performance is, she depicts teenage ennui in both an impressively realistic manner and in a way that feels utterly unique to this character. Her effortless comedic delivery also delivers praise since it comes in mighty handy for some hysterical dialogue-based comedy that Condor nails. Josh Corbett is also fun in a small but memorable supporting role as Lara Jean's well-meaning Dad.

Noah Centineo's performance as the character of Peter is solid, but he is stuck with the character that serves as my biggest grievance with To All The Boys I've Loved Before. Peter is depicted so clearly as a self-centered fellow from the get-go that it's hard to buy it when Lara Jean begins to fall for him, it feels like more of an out-of-the-blue development than it should. God knows the storytelling routine of a cad turning out to have a heart of gold is nothing new in romantic dramas and it's been done well elsewhere, but To All The Boys I've Loved Before does struggle with making its version of that routine work. At least its take on sometimes familiar material shows far more ingenuity, making To All The Boys I've Loved Before something like a cup of Cold Stone ice cream; not a game-changing experience but certainly a pleasant and sweet one.
Posted by Douglas Laman (NerdInTheBasement) at 9:52 AM