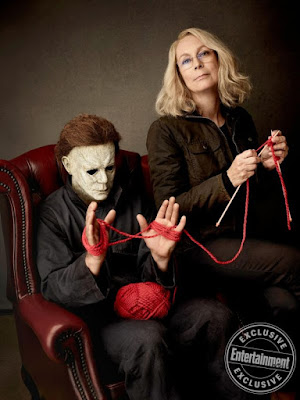 Before the holiday season box office officially gets underway, October 2018 closed out on a quiet note as Halloween still ruled the box office this weekend. This David Gordon Green directorial effort dropped 58% to gross another $32 million for a $126.6 million in ten days. Looks like this one's on track for a domestic total between $160-170 million, which is just a fantastic total for this $10 million budgeted title.

In second place we find A Star Is Born, which fell just 25% this weekend to gross another $14.1 million. That's actually a slightly better fourth-weekend hold than The Martian at the same point. After 24 days of release, A Star Is Born has grossed $148.7 million. Can this one get to $200 million domestically? Considering it's likely gonna score oodles of Oscar nominations and thus score some more money through a re-release timed to Oscar season, I wouldn't be shocked if it did. Repeating in third place this frame was Venom, which fell 40% to gross another $10.8 million for a domestic total of $187.2 million. The lack of majorly successful new releases meant it wasn't just A Star Is Born that held well this frame, most of the holdovers in general held well. Goosebumps 2: Haunted Halloween, for instance, dipped just 22% to add $7.5 million to a domestic total that stands at $38.3 million.

The biggest of this weekend's meek crop of new releases was Hunter Killer, which grossed only $6.6 million. The only two starring vehicles for Gerard Butler that have fared worse on opening weekend were Playing For Keeps and Chasing Mavericks and this is the worst opening weekend for a Lionsgate release debuting in 2,500+ locations since Criminal in April 2016. This was just a dismal debut all around and is there really anything else to say here?

In its second weekend of wide release, The Hate U Give fell 33% to add $5.1 million to a domestic total that now stands at $18.3 million. Unfortunately, First Man was one of the few holdovers to not hold exceptionally well as it dropped another 40% this weekend for a third-weekend gross of $4.9 million for a domestic haul of $37.8 million. Smallfoot had another excellent weekend-to-weekend hold this frame as it dipped just 27% for a fifth weekend gross of $4.7 million, though its domestic gross still only stands at just $72.5 million after a month of release, though at least that puts it with $100,000 of exceeding September 2016 Warner Animation Group effort Storks. Also in its fifth weekend of release was Night School, which dropped another 33%, giving it another $3.2 million for a $71.4 million domestic haul.

Rounding out the top ten this weekend was Mid90s, which expanded into wide release this weekend, 1,206 locations to be precise (the eighth widest release in the history of A24) but only managed to score $3 million for a per-theater average of $2,488. Despite getting off to a massive start in limited release last weekend, it looks like Jonah Hill's directorial debut wasn't able to translate into mainstream success and will close its domestic box office run beneath the $10 million mark. Meanwhile, The Old Man & The Gun expanded into 1,042 locations and grossed another $1.8 million (a 15% dip from last weekend) for a per-theater average of $1,727 and a domestic total to date of $7.2 million.

After making big bucks overseas, Johnny English Strikes Again debuted domestically to meek numbers, only scoring $1.6 million, though that is the seventh biggest limited release opening weekend of 2018 (the feature bowed in 544 locations). No matter, the overseas grosses are big enough to make this one's domestic release a formality at this point. Despite being in more theaters than the newest Rowan Atkinson comedy vehicle, Indivisible was another Pure Flix strike out with only a $1.5 million opening weekend and a $1,898 per-theater average, the third-worst wide release opening weekend for the studio. The end is near for the domestic run of Bad Times at the El Royale as it fell a heavy 59% this weekend (one of the largest weekend-to-weekend drops for wide release holdovers this weekend) and grossed an additional $1.4 million for a domestic total of $16.5 million. Holding much better was Free Solo, which continued its stellar limited release run by having its fourth straight weekend-to-weekend increase and grossing another $1.06 million from 394 locations for a per-theater average of $2,695 for a domestic total of $5.1 million.

And now we come to the new limited releases and we start things off with a doozy. The 2018 Suspiria remake premiered in just 2 locations this weekend and grossed $179,806 for a per-theater average of $89,903, the biggest opening weekend per-theater average of 2018. It shall be interesting to see how this heavily graphic movie does in its wide release expansion on Friday. Lionsgate/CBS Films brought Hell Fest back into 907 locations for Halloween, but nobody came to the attraction as it grossed just $175,000 for a per-theater average of $193 and a domestic total of $10.9 million. Apparently, London Fields finally bowed domestically this weekend and in a wide release to boot, in 613 locations to be precise. I had no idea it was getting released this weekend, let alone in such a wide release, until a few hours ago (the only location near me playing it is the Cinemark 14 in McKinney, Texas) and it turns out I was not the only one unaware of its release this weekend as it grossed a disastrous $160,000 for a per-theater average of only $261, the second-worst wide release opening weekend in history. Fun fact: this is the second time this month the studio GVN Releasing has debuted a film that scored the second-worst opening weekend ever for a wide release. Their October 5, 2018 title Shine opened to only $205,842 and was behind only the infamous $96,076 bow of Proud American among lowest wide release opening weekends until London Fields showed up.

The top 12 movies this weekend grossed a total of $95.6 million, an OK sum for the 43rd weekend of any given year and up 55% from this same weekend last year when Jigsaw topped the box office. October 2018 is now the biggest October in history with $785.5 million and should have no trouble grabbing the $14.5 million necessary in the last three days of the month to become the first October in history to gross over $800 million. The 2018 domestic box office has now grossed $9.6 billion and is running well ahead of any other year in history at the same point.
Posted by Douglas Laman (NerdInTheBasement) at 11:07 AM