Tony Todd Excels As The Nefarious Mythical Foe of Candyman 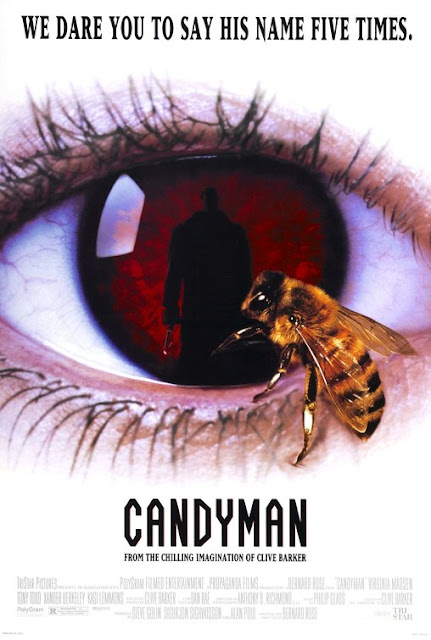 We all know about Freddy Kruger, Jason Voorhees, Leatherface, Chucky, Michael Myers, all those horror movie icons who hunt down people in gruesome ways and just can't seem to be killed no matter what you do. But what about Candyman? This figure, portrayed by Tony Todd in his three movies, likely never got as famous as some of his horror movie villain counterparts simply because he wasn't as ubiquitous, whereas Jason got endless sequels throughout the 1980's and 1990's and Chucky is still headlining direct-to-video follow-ups, Candyman only starred in three movies, the last of which was released in 1999. Whatever the reason, the original Candyman is a good enough horror movie to make me wish Candyman was a more well-known figure in the world of horror cinema. Maybe that new remake Jordan Peele may or may not be producing will help boost his profile?


In the first entries of most horror movies with distinctive antagonists like Leatherface of Michael Myers, said antagonists are either usually treated as "bedtime stories" or they're entirely unknown entities about to violently pounce on our lead characters. By contrast, Candyman begins with a cautionary tale (featuring an appearance from Ted Raimi, always a delight to see him!) of the kind of violent carnage Candyman can exact on people. The impact the supernatural entity known as Candyman can have on mortal humans is palpable from the start and though our lead character, Helen Lyle (Virginia Madsen), is dubious that Candyman exists, she's the exception, not the rule. By and large, Candyman's presence is treated as an all too real threatening presence, one that's had wide enough impact that Helen is doing an academic study on urban legends like Candyman and soon investigates sites where murders occurred that many associate with this fantastical figure.

Who is Candyman? Well, in life, he was a 19th-century painter who engaged in a romance with a white woman whose father, so enraged over this interracial romance, saw to it that Candyman was violently murdered, a process that included cutting off his right hand, hence explaining why the ghostly form of Candyman has a hook hand. This gruesome demise was not the end of Candyman, who has viciously killed people over the years as a spirit and can be summoned when you say his name five times in a mirror. Helen's inability to believe he exists means he eventually decides to use her as a cohort in his most recent slayings, which soon means Helen is blamed for Candyman's gruesome murders. The mythical figure she never believed in is now destroying her life and bringing her to the edge of sanity.

Candyman is the rare movie that's frequently just extensive world-building and exploration of its own mythos that's still entertaining. Indulging in these two elements too much can lead to a film that's near impossible to engage with (just look at the Pirates of the Caribbean sequels), but in this case Candyman's prolonged fascination with fleshing out the influence and lore of Candyman just gets one even more intrigued with the movie. That can be primarily chalked up to how such exploration is tied into Helen's interview segments with people who have been impacted by Candyman's gruesome murders which allows for some level of character grounding to be present whenever the screenplay penned by Bernard Rose is turned over to telling tales about the horrors Candyman can commit.

As for the titular character himself, he's played by Tony Todd who really soars in this particular part. Like fellow 1990's slasher movie villain Ghostface, Candyman differentiates himself from prior horror movie foes by deviating from the silent killer element that defined the likes of Michael Myers and Jason Voorhees and getting just as much of his menace from the dialogue he speaks to our lead characters as he does from the grisly way he kills people. Todd's gravitas-infused vocals are perfect for Candyman's grandiose lines that are intended to send a shiver down the spin of potential victims while the subtle but excellent touch of having Candyman just appear looking like a normal person (he isn't wearing a kooky mask or have some gruesome scar on his face) reinforces how this spiritual force was once a mortal man wrongly slaughtered at the hands of racist.

The Terror at 20,000 Feet-esque cat-and-mouse game between Helen and Candyman keeps on ramping up tension throughout the story in a manner that isn't exceptionally frightening (the death scenes are usually over-the-top enough to be so divorced from reality that even a scaredy-cat like me wasn't disturbed by them) but kept me thoroughly engaged all the same. The world of Candyman is a fascinating one and it's not hard to see why the film is so enamored with it, especially since it allows for numerous chances for Tony Todd to shine as a performer. Todd's work here alone makes a great case for Candyman being deserving of far more recognition as a memorable horror movie adversary.
Posted by Douglas Laman (NerdInTheBasement) at 5:00 PM