Tucker & Dale vs. Evil Is A Mostly Successful Deconstruction of Horror Movie Stereotypes 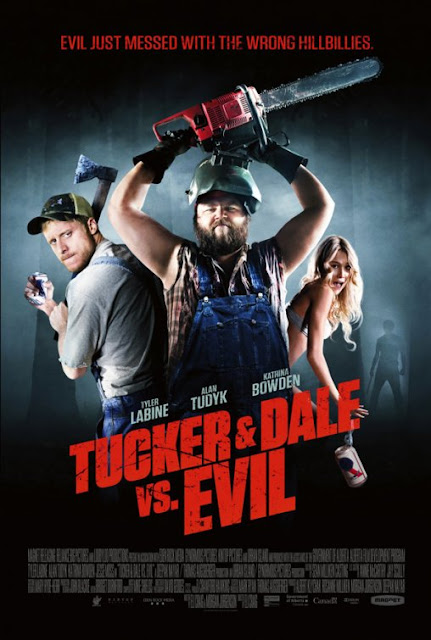 Hillbillies are one of the prime stock stereotypes for villains in American horror cinema right up there with any sort of fictional entities like witches or ghosts and other real-life creations like creepy-looking dolls. Of course, unlike dolls or werewolves, people with physical appearances, mannerisms and voices that get referred to as hillbillies actually do exist and such a long-standing stereotype has certainly helped perpetuate the idea that everyone who would fit under the moniker of a hillbilly, in reality, is made in one exact mold. The 2011 horror comedy Tucker & Dale vs. Evil, which was written and directed by Eli Craig, looks to combat those long-standing stereotypes by doing a conventional horror movie from the perspective of the hillbilly characters the audience would normally think of as the adversaries.


Those hillbilly characters would be the two titular characters Tucker (Alan Tudyk) and Dale (Taylor Labine), they're lifelong best friends who are heading off to a secluded cabin in the woods that they intend to turn into a vacation home. On their way to this vacation spot, they run into a group of college-aged individuals who would fit the mold for your standard group of protagonists in a similarly standard horror film. While out fishing one night, Tucker and Dale both save one member of this gaggle of college kids, Allison (Katrina Bowden), after she falls into a lake and nearly drowns. Her friends mistakenly believe she's been kidnapped by two murderous hillbillies and set off to rescue her under the leadership of Chad (Jesse Moss).

Of course, Tucker and Dale both mean her no harm, with Dale in fact actually finding himself smitten with Allison. The eventual romance that blossoms between the two of them is probably the weakest aspect of Tucker and Dale vs. Evil since, despite giving her some personality traits like an aspiration to be a therapist, she eventually just becomes a romantic object for one of the two lead characters to pursue. Lord knows this isn't a writing flaw unique just to this movie but it does undermine some of its intended message of how important it is to see people as complex individuals and not just stereotypes considering one of its primary characters is mostly just used as a way to give Dale a prize to pursue.

But, aside from that weird incongruous element (which at least gets somewhat offset by how Katrina Bowden still does solid work acting-wise in the role), the script for Tucker & Dale vs. Evil is mostly wicked fun. Like the best parody movies, this feature knows its way inside & out of the films it's lampooning while also making sure that the jokes aren't just a steady stream of unfunny recreations of famous bits from blockbusters movies like it's a Friedberg & Seltzer parody movie. A joke like watching the accidental gruesome deaths that befall the various people that try to "rescue" Allison are hilarious no matter how much context you have regarding the types of motion pictures it's poking fun at.

The deaths themselves are imaginatively gruesome and, despite this being a very low-budget indie affair, are brought to life in visually clever ways. To boot, the high volume of such demises that occur avoid feeling repetitive and they frequently pay off previously established story or character details, which is nice to see. Perhaps even more impressively than the death scenes are the two lead performances coming courtesy of Alan Tudyk and Taylor Labine playing the Redneck Abbot and Costello duo that headline this horror/comedy romp. Tudyk's talents as a voice actor means he takes to his characters Southern accent like a duck to water and he also makes for both a great foil and a believable best pal for Labine's character who ends up becoming the primary lead of the piece.

2011 was a standout year for Taylor Labine in his career as a film actor between  a memorable supporting turn in Rise of the Planet of the Apes as the guy who ends up dooming humanity and starring in Tucker & Dale vs. Evil (which debuted at the Sundance Film Festival in 2010 before getting a September 2011 theatrical release), which allows him to subvert redneck stereotypes by playing a sensitive intellectual type with self-confidence issues. There's some real heart in how Labine portrays this character that allows Dale to feel like the complex human being he's supposed to be and such a strong lead performance anchors the gruesome yet humorous subversive antics of Tucker & Dale vs. Evil.
Posted by Douglas Laman (NerdInTheBasement) at 1:47 PM